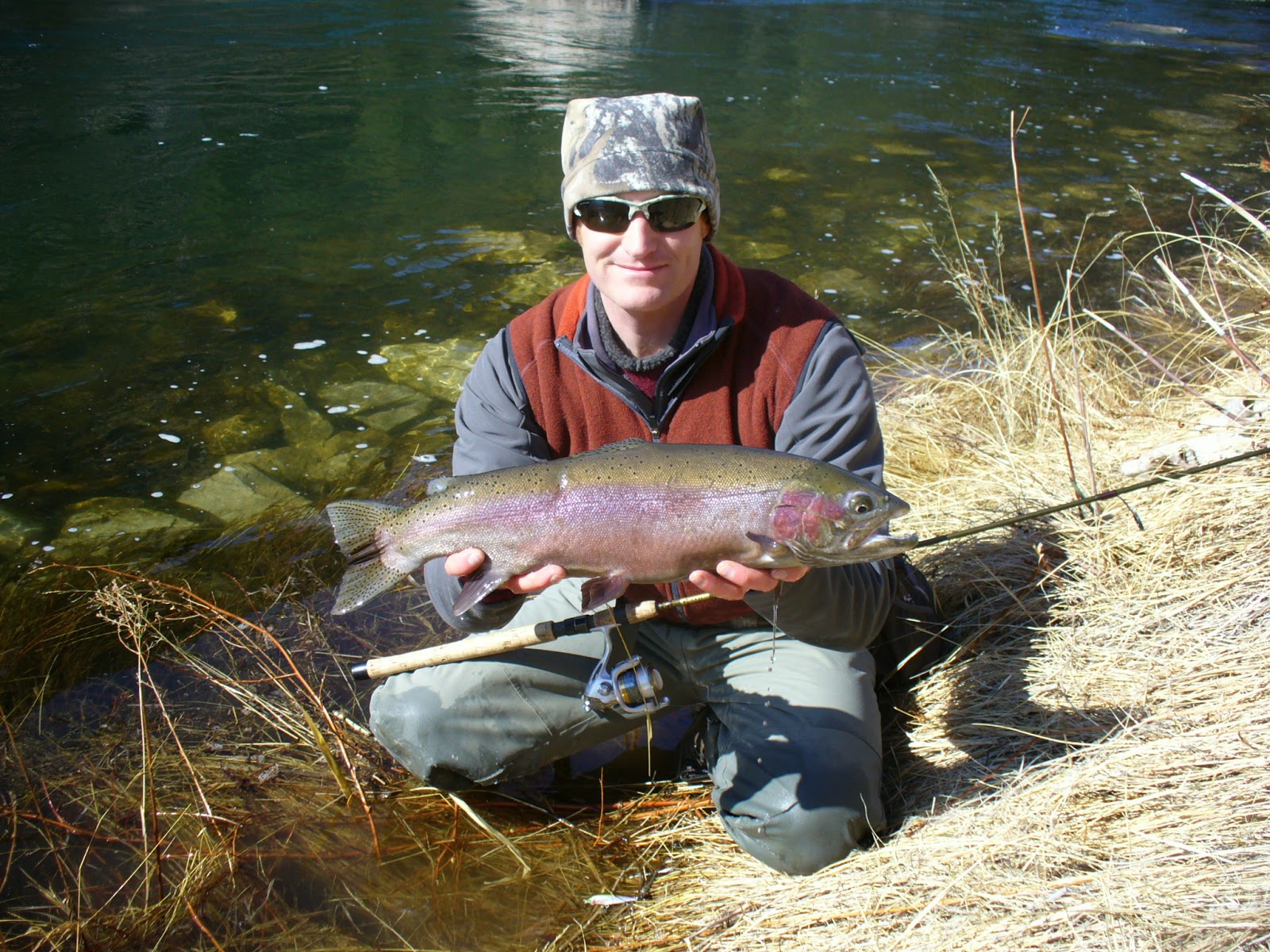 Apparently someone had stopped on the trail above me to watch me fight a fish. It was a gem of a warm winter day, a few weeks before the rainbow spawn would get underway. I got it to my feet, did a quick lift to the little tripod with my camera I'd set on the ledge behind me, and then slipped it back in the water.  I held its tail for a few seconds before it shot away, gliding over the sunlit gravel bar in full view for several yards till it reached the deep green of larger water.  As I stood to gather my things I hear "Nice fish!" from up on the bank. I look up to see a fisherman in full regalia, dressed to the nines carrying multiple fly rods with  a multitude of gadgets dangling from them and his various gear bags like Christmas ornaments.  He had so much gear I wondered if he'd camped streamside the previous night.  His posture said that he'd seen the entire show my fish and I had put on just then.  His face was of true, genuine interest and sincerity.  I thanked him heartily and waved as he moved on down the trail.  He had an air of disbelief about him, but I didn't really get the impression it had to do with the size of the rainbow he'd just witnessed me do battle with.  Perhaps I'm wrong, but I felt like it had to do more with me, or maybe the entire scene at large.  I chuckled to myself and wondered what was going on in his head.  I  absurdly imagined him being shaken by the experience and saying to himself: "I thought all spin fisherman were barbarians at the core. Surely I expected to watch him bite that fish's head off right there on the bank and gut it with his fingernails.  He didn't even bash it on a rock before lashing it to a stringer.  He let it go! And it lived!  Where was his net? Didn't know a guy could actually touch a trout. But wait, that rainbow wouldn't have even fit in the net on my back - maybe I should have sprung for a bigger one."

I think we regarded each other in equal bewilderment. I'm known to carry two rods and my share of tackle, but this guy truly looked like he'd just dropped out of the mountains after a couple weeks on the trail - except for his three rods and waders. And to him I kind of looked like one of his own - I was in waders, which very often spin fisherman are not, and my spinning rod was nine and a half feet long - likely longer than most of the rods he was carrying. I'm sure when he came around the bend to see me standing in the water with a deeply arced rod of that length, I very likely must have looked like a fly angler.  Thing is, I am a fly angler, but I very willingly blur the "lines" and fish what matches the situation best, or what suits me best, on a given water or day. This day, as is quite often the case for me on big water, I was tossing jigs on light line and reaching fish that hadn't seen any of the flies the dozen fisherman who passed by had drifted over them.  That fish had nailed my 3-inch minnow imitation with gusto as I hopped it among the rocks on the bottom 50 yards from wadable shoreline in several feet of water beneath a swift surface current.  Even the majority of the spin fisherman who may have passed by had probably just sailed a spinner over it.  Maybe some had drifted a bait rig through, which could have done the trick, but even then in my observations of the typical bait fisherman, I don't think they would have normally been out in the water picking the seams apart the way a jig can.  The bait rig may certainly have drifted through on the right path, but quite often that would have been incidental, a matter of statistics, after enough repeated casts had been made.  It's funny to me how much disdain spin fisherman and fly fisherman have for each other.  They both miss out on fabulous and very effective ways of catching fish - if they'd just trade gear for the day.  I shake my head at each camp - fly fisherman who are blinded by the pressures of maintaining eliteness and spin fisherman who are stuck in the rut of cast-and-crank. I'm sure there are plenty of folks like myself who simply love to employ the tactics they find most pleasing and most effective at the time, regardless of the gear variety, or are just up for all-out experimentation, but I don't bump into them often.

Still, I think its the "elitist" fly fishermen who give me the most entertainment, particularly those who aren't accomplished enough to be putting on airs.  They look down their nose at my spinning reel and have no idea I'd likely hold my own or outfish them with their own fly rod.  I chuckle at the 'groupie' fly fishermen every time I hit a favorite stretch of water where I often catch larger fish. It's big water, and deep. The banks are steep and fly casting is really tough. There are only a few decent spots to wade any distance from the bank, and then only if flows are low enough. Just a couple gravel bars. The fly fishermen congregate on these bars like Cubans on a raft (and I don't mind that comparison since both groups are in search of a better way of life). Then they all just stand there and beat the water to a froth, high-fiving each other whenever somebody manages to land one. It's like a prestigious men's club. All suited up in the latest gear, obligatory landing nets and purebred pooches standing by.

Some of them are without a doubt outstanding fly fishermen who are probably in their groove and are just as amused as I am. Many are probably poor souls who know no better because they bought into the lore that fly fishing was the only true way to take a trout. That's fine by me.  I don't mind walking on around the bend, away from most everybody, and searching out five pounders all by my lonesome.  And I'm sure I won't bump into the majority of them next time I break out my fly rod and put it to work on a remote stream.  Maybe I'll see that same guy again.  But I doubt he'd recognize me with a fly rod in my hands.  Although he might - if the fish is of similar proportions. 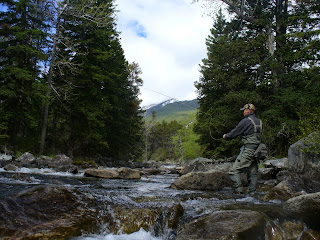