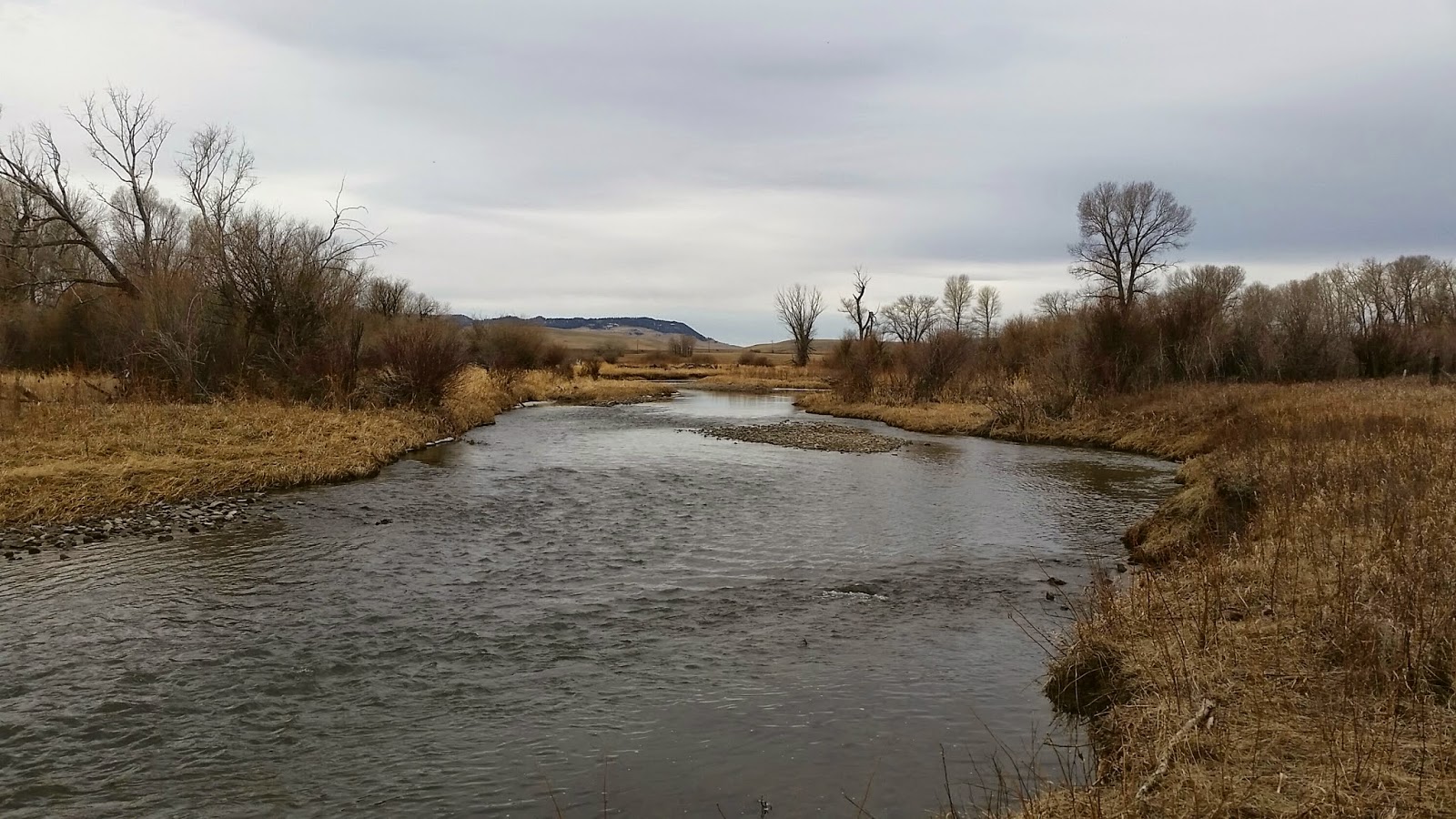 Yesterday was an awesome day to be spontaneous.  I had a good route to follow for work and fantastic weather.  Of course the fishing I do is rarely 100% spontaneous. Looking for a chance to go is my regular state of being. I carry gear in anticipation of jumping out at any bridge crossing. My day started as a day in which I would be traveling more than three hours from home to visit some sites for work. One site was near a stream I have fished in the past but don't get to fish often and so I was looking forward to finishing the field work up and taking some casts before returning home. I left early in order to allow plenty of daylight to hit it. But as I was driving in the dark I realized I was going to pass another stream about an hour or so into my trip.  A stream that I like very much, one of Montana's unsung trout fisheries that holds 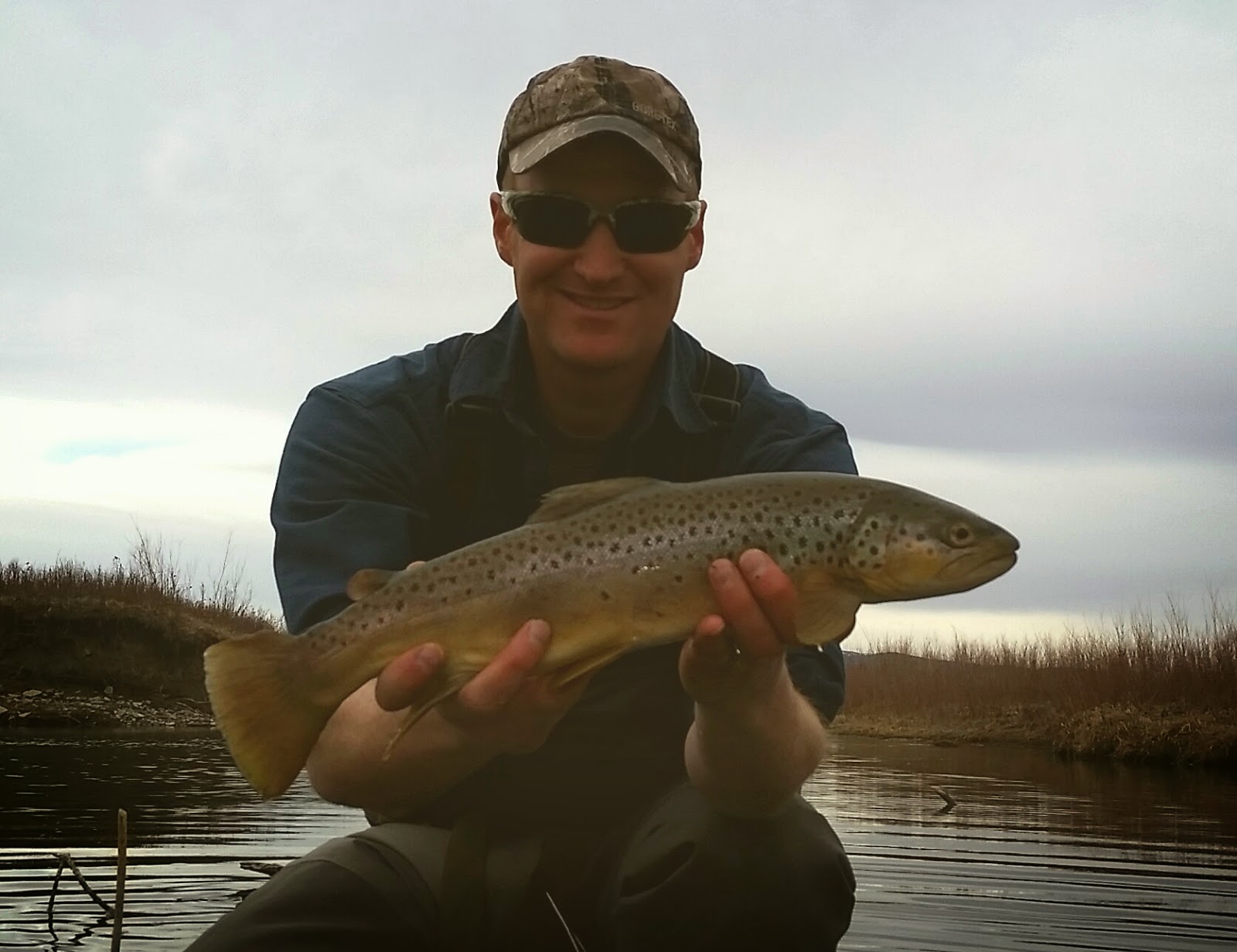 quality browns, and one that I fully expect to get a bruiser out of some day. I chuckled at the thought of being able to hit two streams in one day separated by many miles. And then it occurred to me that along my route home I would also pass the Missouri. A plan was forming in my head, a challenge I couldn't pass up. Simply the 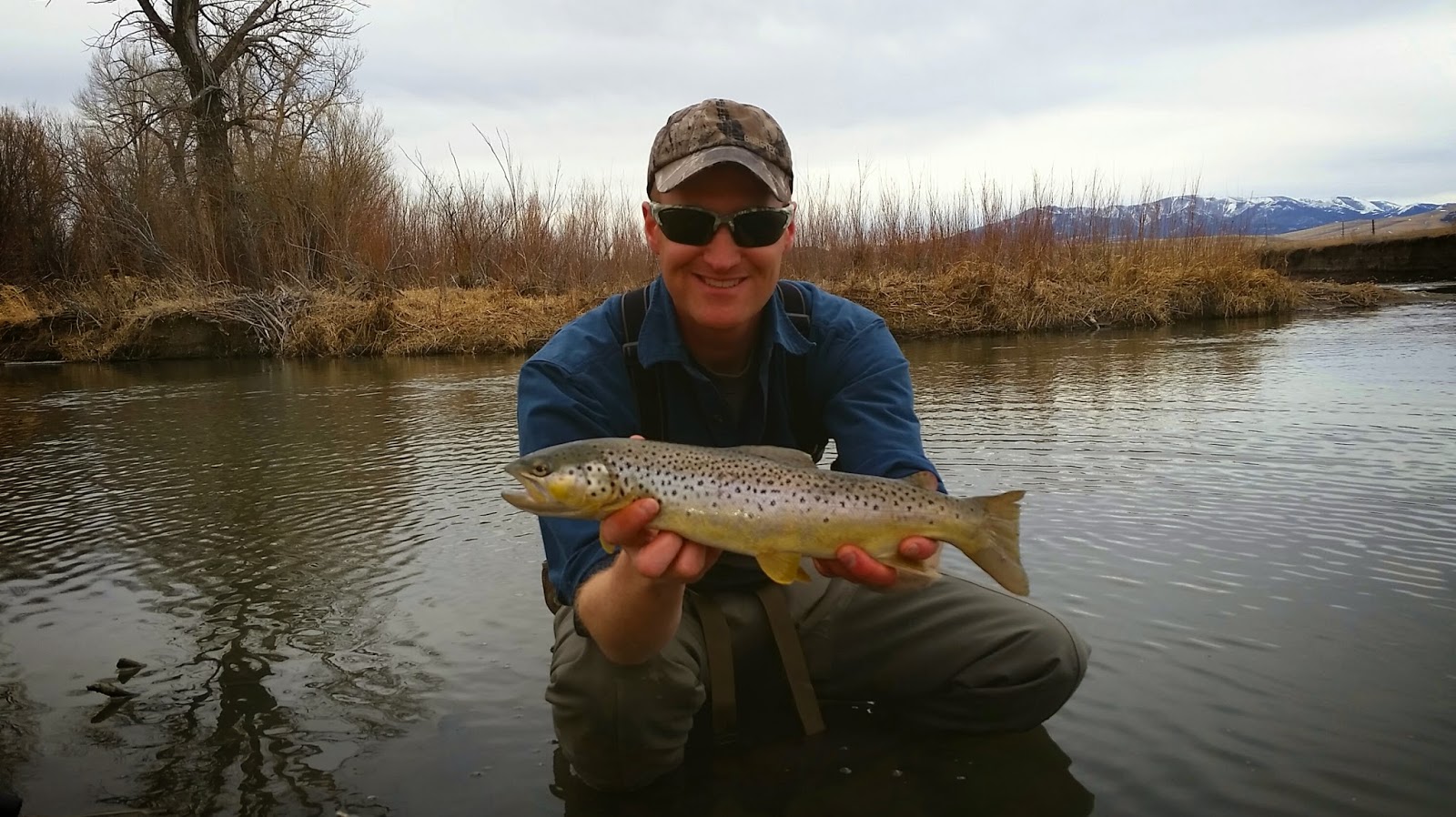 travel alone was nearly an entire eight-hour work day. Add in the time I needed to evaluate the future gravel resource sites and I was into overtime as it was. So I figured there couldn't be any harm in stopping at the first stream to cast at dawn, followed by spending what could be considered a lunch break at the next stream once my site visits were complete, and then finishing up at the dusk hour along the Missouri somewhere on my way home. The challenge as I saw it, was to fish three major Montana streams and catch and photograph at least one fish from each. I wasn't going to have loads of time on any one of them, but I figured I would have just enough to locate some fish, and quite possibly achieve the goal. These streams are all separated from each other by a lot of miles, and would normally never be fished in a single day by one person. Perhaps some other people have done it, but it sure can't be many. 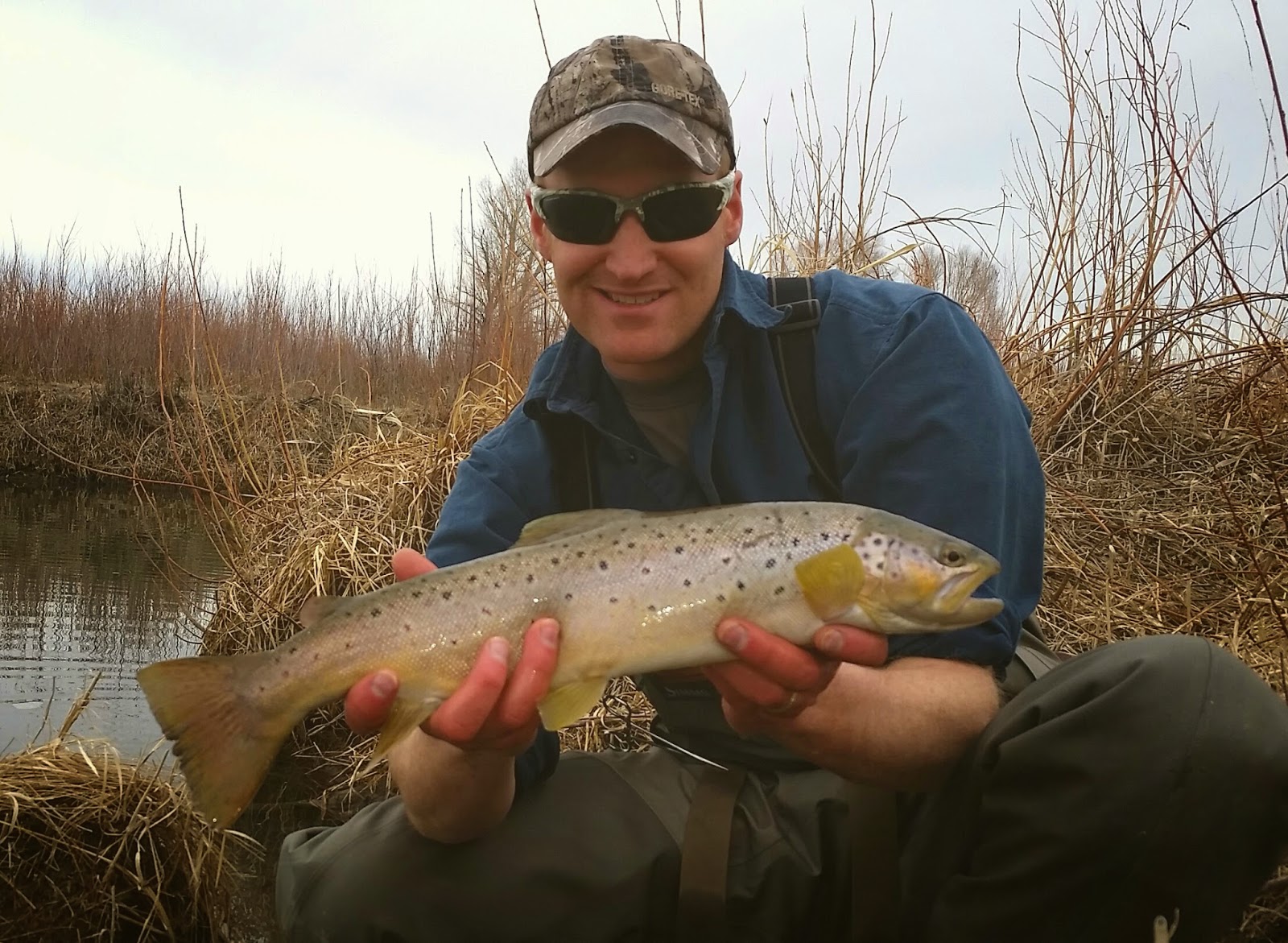 I used a designated public fishing access at each stop. Mostly just for convenience. I swung into the first one just after daylight. I pulled my waders on as quickly as I could and spent some time fishing the holes immediately adjacent to the parking area to get a feel for the mood of the stream. It took more time than I expected but I managed to stick my first strike and land it for a picture. First stream - check. I could have left right then.... na.
I missed the next two strikes but felt I had now dialed the fish in. I pried myself off the creek and walked back down to the car.  But instead of just leaving with the first goal accomplished, I made a beeline for a hole downstream that I anticipated would hold fish based on what I had just learned. Although the high for the day was headed into the upper 50s, the stream banks were still lined with ice and the water was cold. All three of my strikes had come from the deepest and slowest of holes that I had passed, so I was headed to the biggest, slowest hole I could think of on that stretch of river. 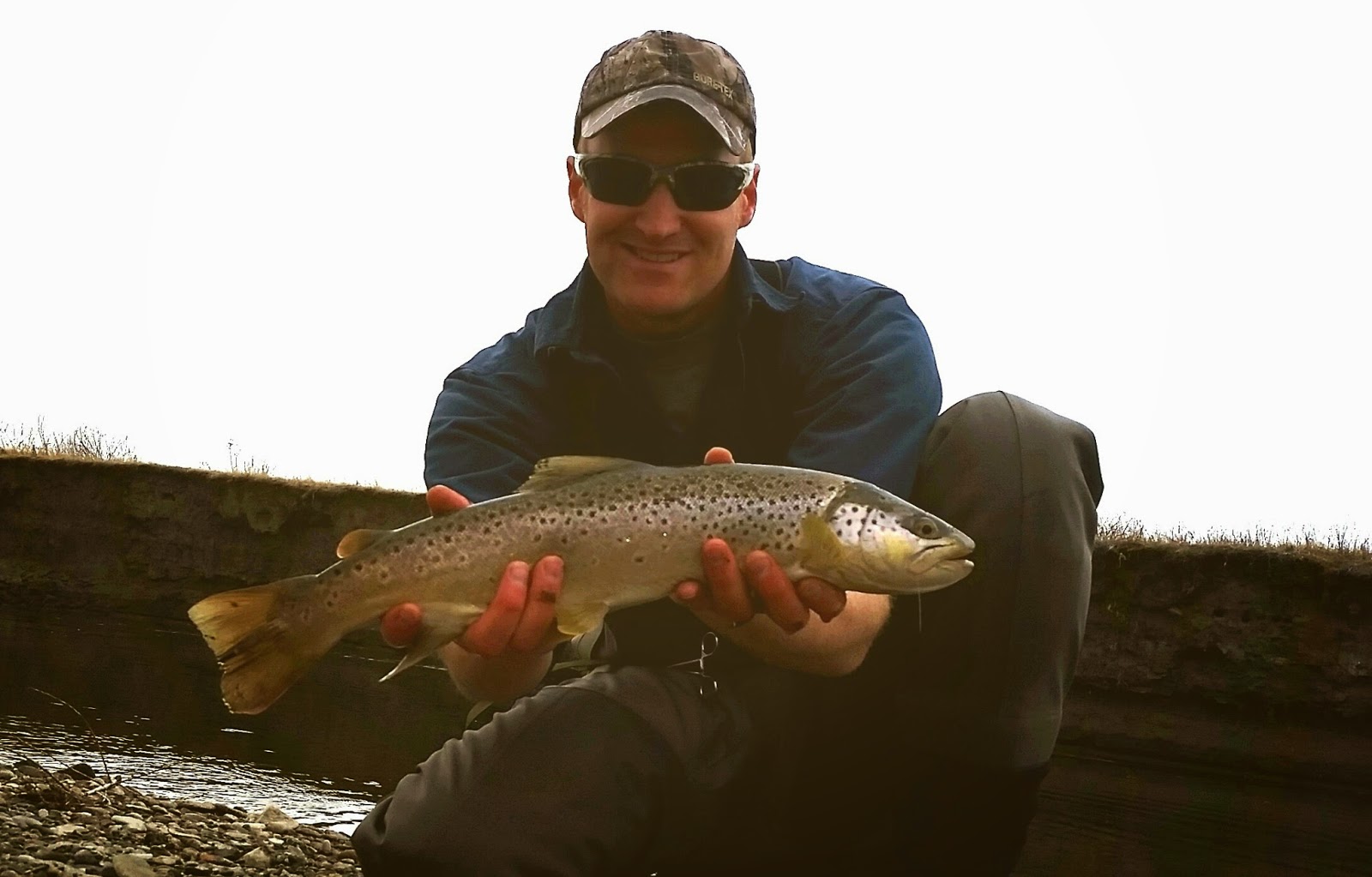 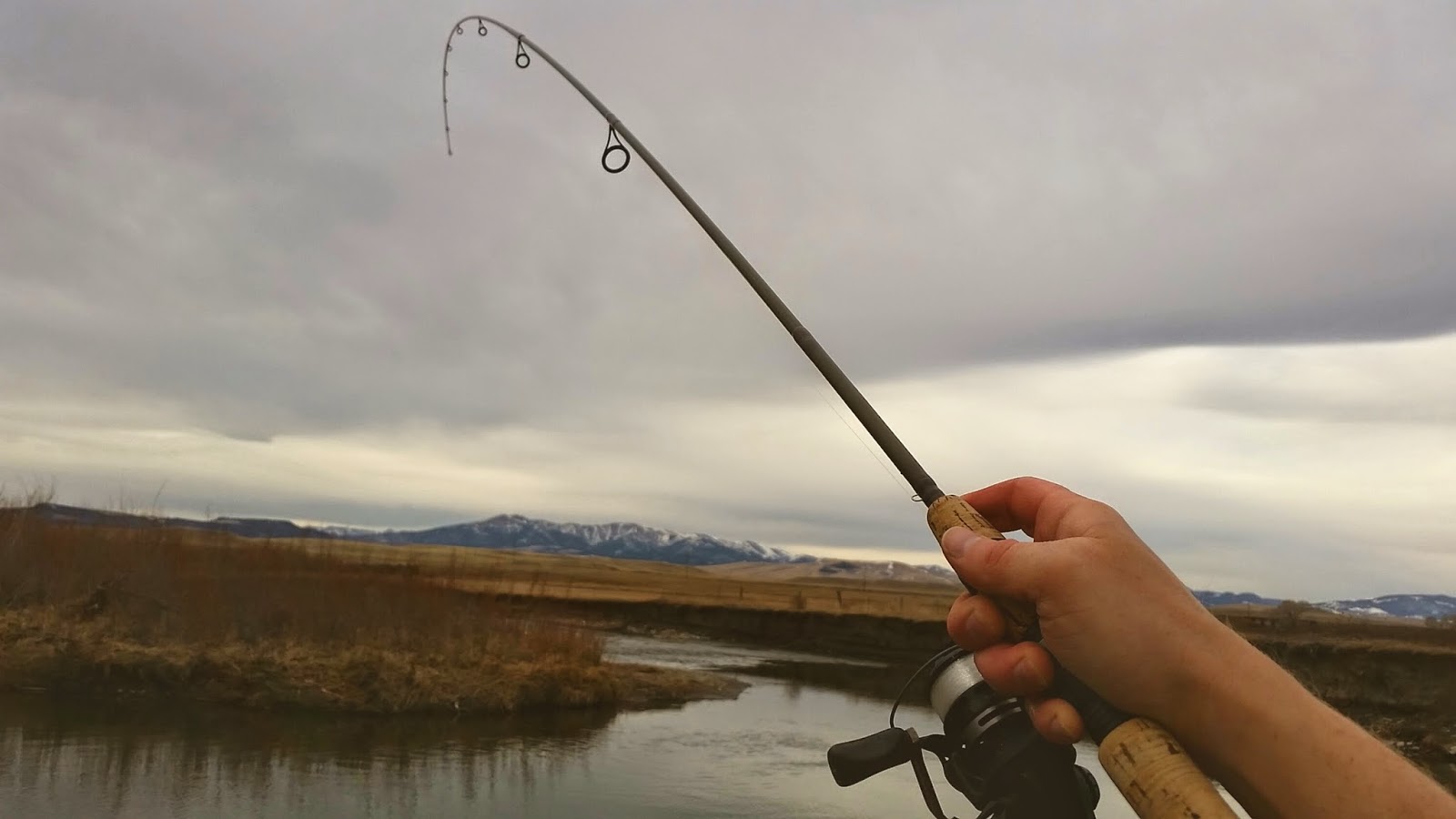 The first cast into my chosen hole resulted in a heavy hookup.  I had fired my cast directly downstream into the confluence of two currents in a deep, slow moving pool. I simply let the lightweight jig flutter downward while it essentially held its place in the stream. A couple of twitches to add life to the illusion of a minnow holding in the current and the tip of my nine and a half foot light action rod sunk sharply towards the water.  It was the same presentation that had drawn all three strikes back upstream near the car after cycling through half a dozen or so others.  A beautiful 19 inch brown rolled to the surface and then shot all over the hole, tearing the top up. I figured he'd just trashed the hole, sounding the alarm like a beaver slapping his tail.  But I was beaming inside, now fully satisfied with my decision not to have driven on and to have spent some more time on this stream. It felt so good to have a fresh and wild trout peel drag like a steelhead wannabe, then come to hand and smile for the tripod I had pulled out of my pocket and set on a log during the fight.  I didn't anticipate what would come next, I just mechanically and naturally as could be resumed the hunt after I watched the fish swim away. I took four more browns from that same hole. One on the smallish side, but the other three were just as quality as the first, each measuring 18 or 19 inches. One more came from smack in the middle where the first had been, another from the head, and another from near the tailout.  Easily one of my best days ever on that stream, and I had only fished about an hour and fewer than ten holes.  If only I could cancel work and spend the day! I had captured my photographic evidence, gone above and beyond the requirements of my "catching goal" - and so I reluctantly peeled the waders off and hit the road. 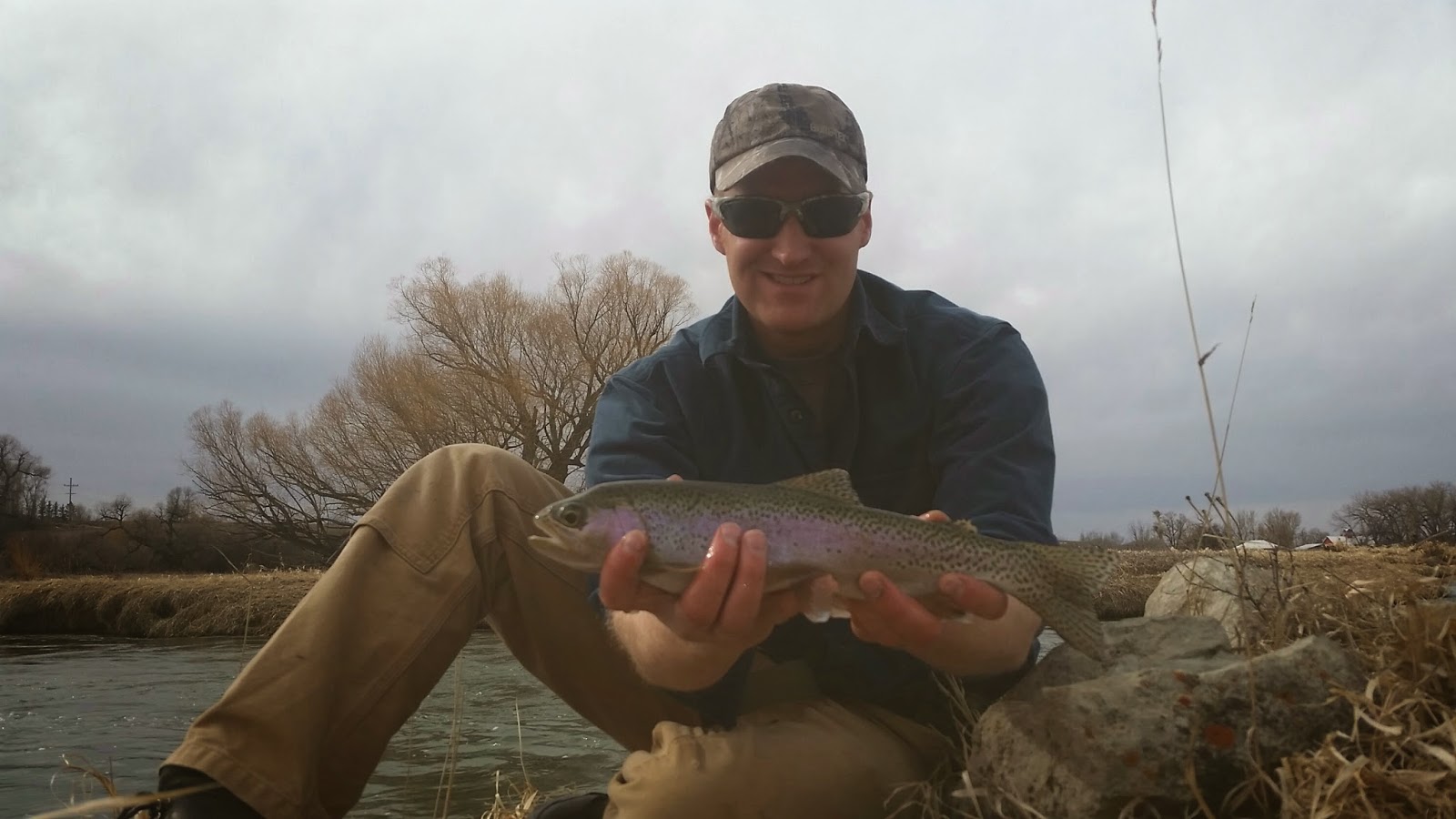 It was early afternoon by the time I was done with my work and crossing over the second stream that I was going to pass on my way home. Again I pulled up to the parking lot of a designated public access, didn't bother with waders this time, and started fishing right away, working my way downstream tossing the same jig. I mimicked the same retrieve from earlier, but found these fish in more of a chasing mood, preferring to swipe the jig as it hopped more energetically along the bottom and traveling with the current.  Again I had what felt like a slow start until I dialed the

presentation, but after landing my first rainbow and getting a picture of it I was pretty sure I was going to be able to pull off this "three for three" challenge I'd given myself. After landing another brown and a second rainbow I headed back to the car and started homeward, barely an hour since I'd first arrived. 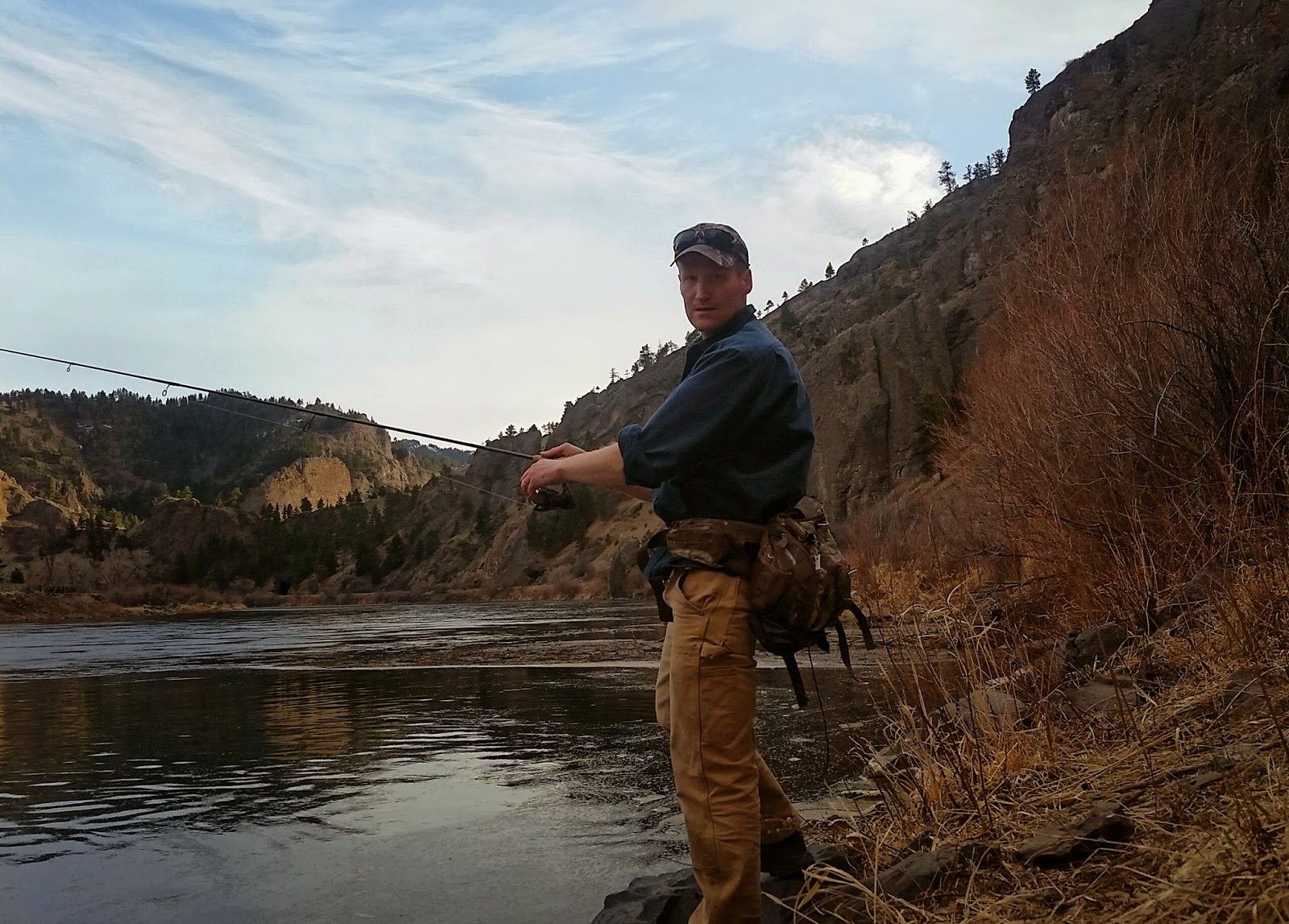 A couple hours later I exited the interstate and headed down Recreation Road, paralleling and occasionally crossing the Missouri.  I came to a stop at a public access I had not used before, although I'd floated passed it a few times.  I knew from those floats that there was a gorgeous eddy right above it, so I slipped down the bank and went straight to it. I tied on a heavier jig and within the first couple casts I had a solid fish on, only to lose it. Daylight was waning and I really wanted that picture showing a landed fish on a third stream. I missed a second some time later and began to wonder if I was going to choke.  But on a cast to a current seam next to a raft of weeds and foam, I connected with a healthy17-inch brown that smacked the jig as it dropped.  I set my Joby tripod up on a rock behind me 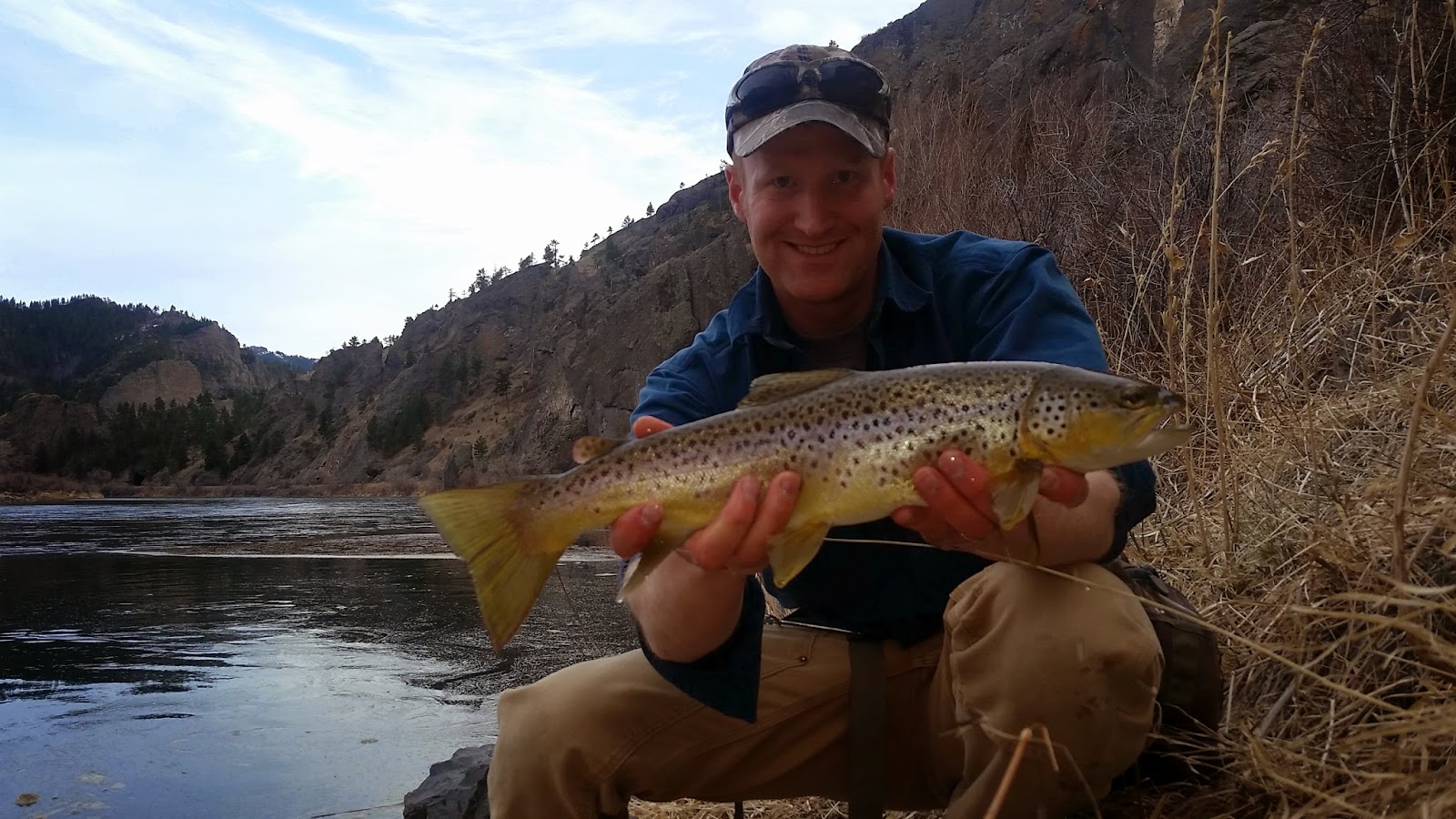 with my phone clipped to it, hopeful this fish would stay hooked.  I took a peek at the screen to see roughly where I should stand for a photo, and teetered on the rubbly steepness of the water's edge, trying to steer the fish to a place I could cradle my hand under it.  The tense moments of gaining control of the fish at the landing passed and I lifted the brown for a shot and yelled "Shoot!" to my phone - one of the words that will trigger the voice command to take a photo.  I yelled it three or four more times just to be sure I'd gotten a picture, and then let the fish go.  I saw no one around, but if anyone was in earshot they must have thought me a very benign and methodical swearer, someone who had just lost a fish or broken his rod but could only repeat "shoot" over and over.  At least I didn't yell "Cheese!," which is another built in trigger word.  I don't know what the casual observer would make of a man repeatedly yelling "cheese" to a rock.  At least "shoot" seems explainable.
As the last "shoot" echoed back off the canyon walls above and the flash fired at my command, I knew I had sealed the deal - I'd caught fish on three different rivers during a trip spanning well over 300 miles and had managed photos of each.  I'd squeezed fishing yet again from what would have been just another work day and even managed to turn it into an all day event with more accomplishment associated with it than a regular day on the job or even a typical fishing trip. To me that is what 'always traveling with fishing gear' is about.
Make it happen.