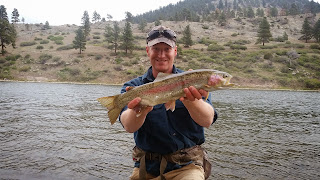 Recent travel - like any time I stray further from home than my mailbox - caused me to analyze where during the day I might squeeze in some time on water I would be passing. I had a meeting to attend in the field a couple hours north. Then I had another site to visit an hour east of there. Like so many day trips for work, travel and fieldwork combined would exceed a normal eight hour day. Working some fishing into the mix would be bonus. I decided to leave early and stop along the Missouri before the day got started. It was windy and somewhat bitter. Miserable, but always worth it. The few diehard boats on the water were rowing hard to keep from blowing back upstream. My kind of people.....

I only had about an hour, so I walked the bank tossing jigs. I picked up a pretty decent rainbow and one brown.

After the work for the day was complete several hours later, I found myself driving along a stream I'd seen several times but never fished. It was before the small stream 'opening day' in Montana, but I was intrigued enough with the idea of new water that I dug through the reg book to see if this creek was a listed exception. I was in luck. Water was high with spring melt, but it was amazingly clear.  Being new water and high water, I opted to sample the local aquatic wildlife with my long 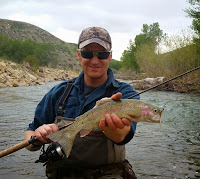 rod and light jigs. I picked my way along the bank, looking for pockets and eddies. Right off the bat - literally along the rip rap of the highway where I parked - I hung a decent fish that I didn't get to see. A couple hundred yards and seemingly as many casts later, I came across a very nice hole that was out of character with the rushing, shooting water I'd been making my way along so far. The opposite bank

had a strong back eddy against brush and undercut root mass. The depth was fantastic, and in lower water the entire hole would be prime. Right now there was just too much water to work a lure or break through to a fish holding depth, except on the opposite bank. Nine and a half feet of graphite lifted the line and bridged the distance between me and the opposite eddy without any drag being created from the rushing water in between. An underhand toss would place the jig on the current seam, a drop of the rod tip would feed line for depth to be achieved, and then the jig could be worked with finesse and next to no influence from the raging water between me and it. In short, I was high-sticking jigs. A long rod excels in these conditions.

I started picking up good fish. First some browns, then some rainbows. I lost more than I landed. I fished until I was satisfied that I'd spent some quality time on new water and had a good feel for what it had to offer. I began to mentally scheme a possible third stop for the day on the way home. It would be back along the Missouri, but the weather was improving and there were likely to be some thick hatches that evening. A quick tally of remaining daylight found that I'd have about an hour and a half if I left right then. I wrestled with the idea of using daylight to drive another hour or so when I could just fish right where I was, but the thought of some topwater action won out. 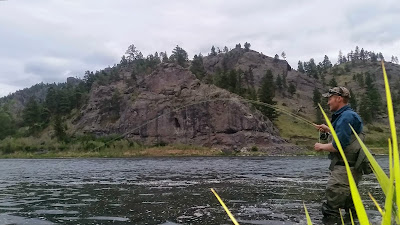 Some time later, as the day was
drawing to a close, I stepped out of the truck along the banks of the Missouri. The wind was gone. The chill from earlier in the day had lifted. I was 20 miles downstream from where I'd pulled off in the morning. I'd chosen this pullout for a couple of weedy current seams I'd noted on previous floats. I figured they'd be full of fish feeding on top, and I had a hankering to float some flies. I was still in my waders from earlier, so I all I needed to do was string up a different rod and take a short hike. I stood in the tall grass and watched one of the current seams. Fish were feeding all right. Smaller rainbows were nailing blue winged olives like bluegills taking bread crumbs in a duck pond. Occasionally a big broad dorsal would rise and fall, or a slurp most likely made by a fish with some heft would interrupt the surface.

The day ended with several scrappy rainbows coming to hand. My fly would drift along the seam lost in a sea of the real thing. It was hard to keep up with which one was mine. But I had several takes. I missed as many as I connected with, and landed half of those. The other half flew off in fantastic leaps or overzealous runs.  I captured some pictures of a few and an action shot or two. 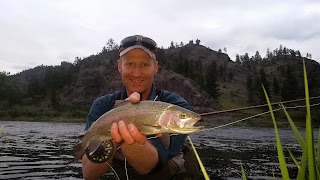 I started the morning looking for some size as I worked big jigs at depth. In the afternoon I sampled some new water. I finished off the evening targeting pods of surface-feeding fish for some visual-take thrills and fly rod fighting fun. Leave a little early, come home a little late, and turn a normal day into a fish-finding day where zinging drag still rings in your ears as you drift of to sleep.
Posted by Bryan Allison at 10:56:00 PM