Ten dollars for water and a beaver hole

A fishing trip is never just a trip.  There's always more.  Occasionally a trip is smooth sailing, but more often than not there is something else besides fish to make it memorable.

As a kid I remember things happening that ranged from being stranded on a lake after burning up an outboard motor, getting tossed from the bow of the boat when the motor seized (different occasion), to losing a rack off the back of the truck that contained the coolers with the week's worth of food.

This past weekend my family and I took our first camping trip of the year.  One chore to accomplish before leaving was changing the switch that controls the water pump in our camper.   I'd had the time to take it off and match it with a replacement at a hardware store, but didn't get it reinstalled before we left.  I wasn't really concerned, I just figured I'd do it after we arrived.  It has a manual pump handle as well.  But as we wound our way up Highway 12 through the Big Belts bouncing over the frost-heave damage from the fading winter, I noticed water pouring out of the sink drain in my side mirror.  I pulled over to see what was going on and found water in the sink, but nothing else.  Maybe I'd overfilled the tank and some was sloshing out.  Never had that happen before, but I supposed it was possible.  As we crested and started down the other side, I noticed it again.  Turns out the bouncy road had taken the two pump switch wires and miraculously touched them together.  This time I found the pump running and the last few ounces of water from our reservoir spewing from the sink faucet.  Apparently the first time I stopped the wires had separated before I entered the camper to investigate.  Now, with an empty water tank - and two freshly duct-taped wires - we entered White Sulfur Springs in search of a water hose.  The hotel manager I spoke to at my first stop tried to smile away my request for water by saying  "water sure is expensive these days."  After a little more haggling we settled on me trading a ten dollar bill for a full water tank.  Once the deal was done, he softened, and seemed to enjoy the silliness of the whole situation.  "This is a first," he said.  "I've never sold water before." "Yeah," I said, "and I've never bought it from a garden hose."

The rest of the trip went well, minus the wind.  Despite the 50 degree daytime temps, the wind kept conditions brisk to say the least.  Still, we knew we were pushing our weather-luck venturing out so early in the year, and all-in-all it was a good trip.  The water was clear enough to fish and the browns that fell for my jigs ranged from 12 to 18 inches.  None of the brutes I was hoping to encounter made an appearance on this trip. But I'll find them on the next. Or the next. 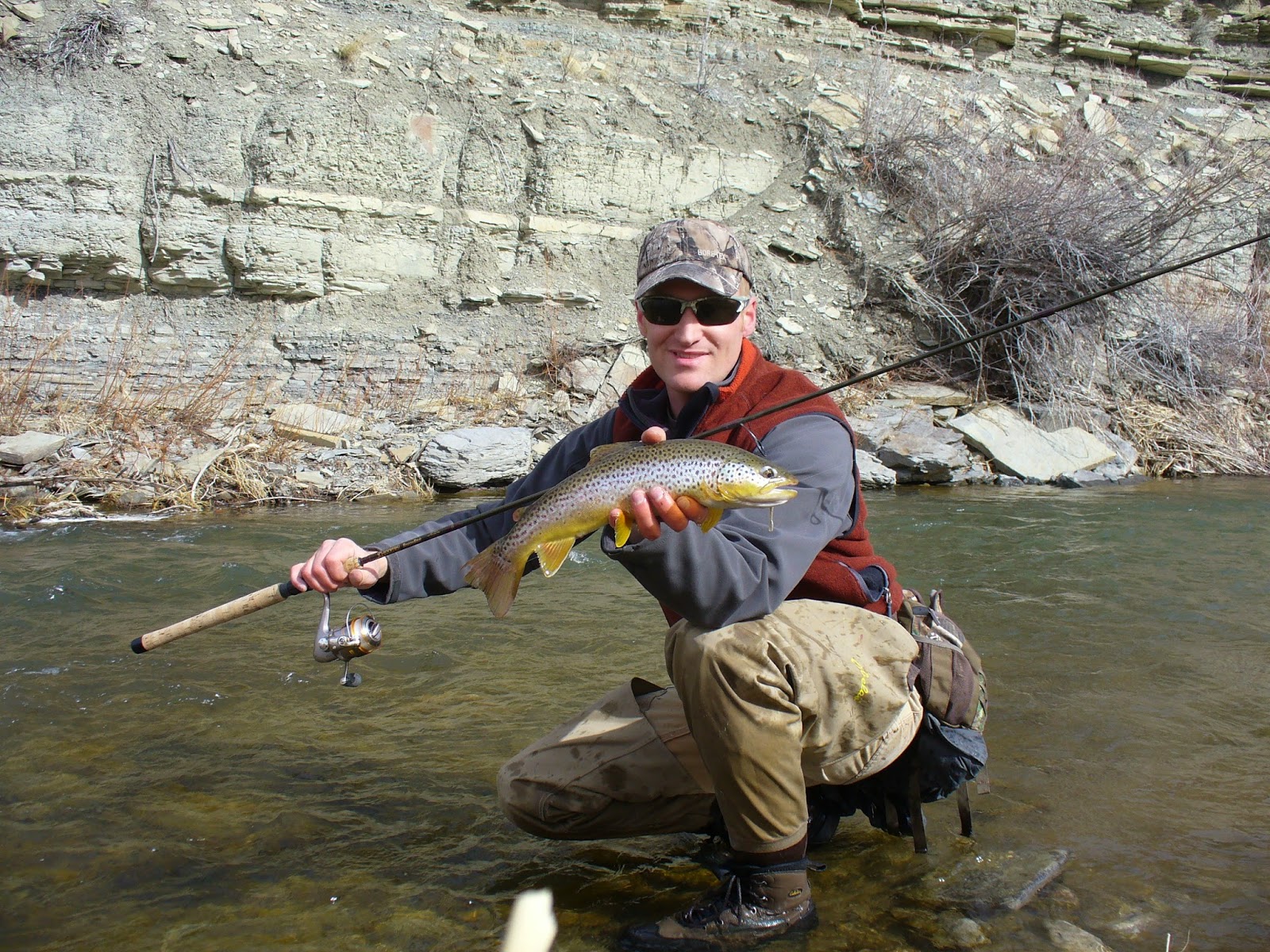 In order to liven things up a little, or maybe just to escape the wind, my soon-to-be-six-year-old son decided to spelunk down a beaver hole.  He had showed it to me, and talked about wanting to go down it.  But after some discussion of how that was a bad idea, I thought the matter had been settled, and went to tinker about the camper while he continued to play around its entrance.  A short time later the alarm was raised, and I find my boy head first down the beaver hole and out of sight.  The hole was dug from the top of the bank on the flat land above the creek and plunged sharply downhill toward the water, surfacing again near the water's edge on the steep face of the creek bank.  My son was yelling something about being stuck in the hole, and I was a bit thrown off at first about where that yelling was coming from.  I climbed down the bank to find his face poking out of a root mat a foot or two above the flowing water.  It seems the burrow had taken a bit of a turn at this point and he had become wedged.  He couldn't even turn his head.  I'm not sure where his arms were.  Understandably he was a bit upset, and I was doing my best to talk him through the importance of remaining calm while I tried to do so myself.  I couldn't let him see me seem worried, and I chastised him softly for getting worked up (while making no mention of the absolutely hair-brained act of diving head first down a hole he couldn't see into that was barely bigger around than his head).  Guess he's not claustrophobic.  What had been going through his mind!?  I'm glad no critters were home, and I'm glad it had an outlet - at least he was looking at the sky and breathing fresh air.  Otherwise he was in about as good of shape as he would have been had someone rolled him up in a carpet and leaned it against a wall with his feet toward the ceiling.  I climbed up the bank, relieved that he wasn't in any danger of drowning and that he was at least immobilized until I could figure out how to extract him.  I was already more or less assuming I was going to have to dig him out.  There was no way to pull him through the direction he was going, I'd already concluded that - although like Winnie the Pooh in Rabbit's hole, it seemed a shame to waste it. The bank above him was a tangled mess of dogwood and willow.  Digging would be tough.  I peeked into the hole to see perhaps how far I'd have to dig to be able to reach his feet when I noticed the soles of his shoes at the extent to which daylight reached into the hole.  Now I went into the hole head first.  Granted I didn't really fit, but I got my head in, and one arm.  There was enough space that we could talk, and I told him I was behind him.  I groped for the feet I'd seen, but couldn't find them, and asked where his feet were.  He started kicking them up and down, and I realized I needed just a bit more reach.  A little squirming and I had hold of one ankle.  I yelled to him to close his eyes and started a steady, firm pull.  He slid with less effort than I anticipated.  Perhaps it was his slick winter coat.  He moved enough that I could now back out myself and reach in with both arms, grabbing both ankles.  A couple more hauls and he was sputtering on the surface, smeared with mud and looking the part of a chimney sweep.  We hope he's cured of his curiosity about holes. I joked with him as I dropped him off at school Monday morning, telling him to be good and to stay out of holes today.  He looked thoughtful, promised he would, and then said that he might dig a few in the sandbox at recess.  I affirmed that would be fine.

He tried his hand at fishing for a little bit after being pulled from the hole, but the wind sent him seeking shelter before long.  The next day, before leaving for home, my daughter expressed her desire to catch a fish before leaving.  She's a much more dedicated soul than my son, except for perhaps the exploration of beaver holes and Lego creations, and she laughed at the wind for messing with her casts.  She managed to catch one, and she correctly declared it her first brown trout, which she named Brownie, and decided it should be supper.  It soon took up residence in the cooler as we headed home.  There was no further incident of mention, and in the end, we all fared better than Brownie. 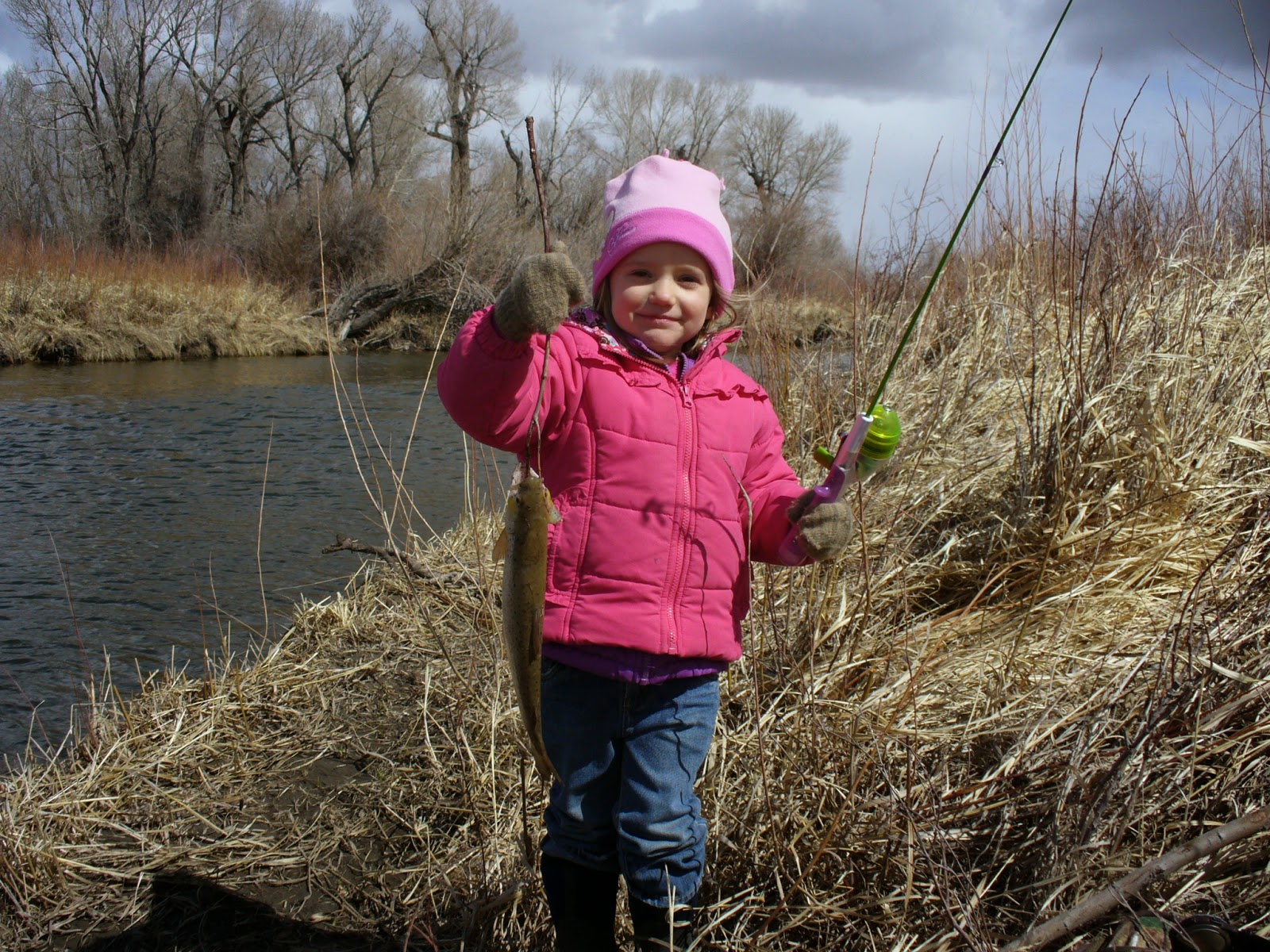