I was at a local farm pond fishing for bass and bluegill. I was probably 12 years old. It was summer, school was out, and I'd ridden my bike to meet a friend of mine. That friend, David Sorrells, still lives in that warm green Appalachian valley in North Carolina and is in his first season of tournament bass fishing as a 'pro' angler. I would undoubtedly be in his boat right now had I not gone on the life adventure of living several places around the country.  We fished a tournament or two together in the past, and it was a ton of fun.

David is responsible for many "starts" in my fishing - grafts that branched beyond what my dad and I already did. He introduced me to taking trout on plugs. I can still feel the emotion that the amazement caused in me when I saw him take a brown on a #11 original Rapala from a knee-deep riffle on a tiny stream. Until that moment I still thought a #2  Vibrax was too large.  He talked me into buying a #11 original off a shelf in Bethel Grocery that morning as we headed up river. It had rained early that morning, and the browns would be on the prowl.  I remember the first fish that nailed it. Turned out to be a smallmouth, my first ever of any real size, and in that moment two new passions were born - plug fishing and the pursuit of smallmouth bass.

That day on the farm pond David showed up with a fly rod. I'm not sure I'd ever seen one before, at least not up close. As a kid, I thought people sailed a fly around in the air to make it look like a real bug to the fish. That it was the "flying" and landing, like a house fly on the kitchen table, which was the reason for the gear and the swirling casts.  But that day I learned what it was really all about as I discovered casting weightless lures. Watching bluegill inhale bugs, both surface and subsurface, will hook anyone. And at 12 years old, it was magical. I have a memory from that day of a bluegill edging out of the grass to intersect a wet fly I was steering back to the bank. I saw him suck it in without getting all the way to it, like he'd reached out and taken it with an invisible straw.  In that moment my fishing was taken to an entirely new level - I suddenly knew more, and I thought about lure presentation differently from then on.

For days and probably weeks after I bugged my dad endlessly about getting a fly rod.  He was reluctant, because it would mean having to take me, and he would rather spend our fishing time together launching the boat in various lakes than untangling my fly line from anything and everything on waters he wasn't that interested in fishing anyway.  I don't know how much time passed, probably years even. I fly fished with David's gear occasionally. Then one day I saw a boy fly fishing with a cane pole. Just a line tied to the tip, the same length as the rod.  This isn't an unusual way to fly fish in the Southern Appalachians, at least traditionally (and its making a comeback of sorts nationwide as a "Japanese" style of flyfishing - the tenkara rod), but for some reason I hadn't encountered it yet. I also don't know why it hadn't already clicked in my brain all on its own - I never went anywhere without a film canister wrapped in fishing line with split shot and hooks inside, much to the delight of folks in parks and other places. I remember one lady at the Biltmore Estate watching me hoist 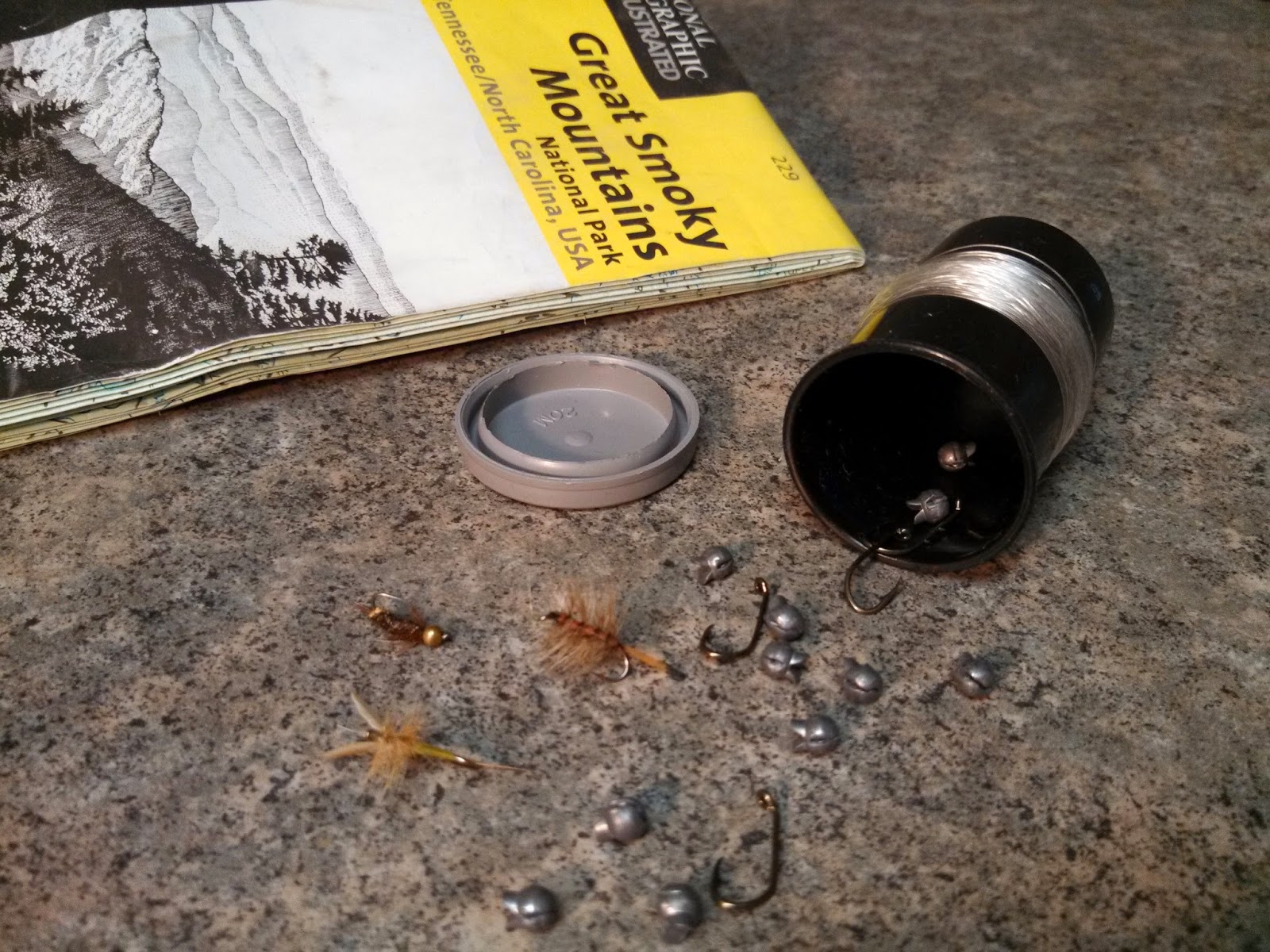 bluegills out from under a gazebo, using strips of white lichen from the the boards as bait, twitched subtly under the surface.  She was convinced she'd be seeing me on a fishing show in a few years.

When utilizing my canister I'd either toss hand lines rigged with whatever bait I found or I'd fashion a rod from a likely looking limb. "Always travel with fishing gear" has always been my motto.   Why I'd never thought to simply put a fly on the end of that line I don't know, but now the idea had spawned and my film canister would never be the same.  I made myself a cane pole fly rod from a piece of bamboo I cut from a roadside patch and drug home behind my bike. It wasn't long before one day I saw cane poles in a bait shop that had been modified to break down into two sections (I'm talking worm and bobber cane pole). A light bulb went off. I don't remember how I got that rod - probably dumped my piggy bank out and paid in nickels - but a two-piece cane pole came home soon after. I rummaged in the basement and found some fine, stiff wire. After drilling holes through the rod incrementally, I passed the wire through and fashioned eyelets, lashing them where I folded the wire over on the back of the cane.  The rod tip eyelet was the base of a safety pin I bummed off my mom. My dad gave me an ancient fly reel he dug out of the attic loaded with a cotton line.  I lashed it to the base of the rod. Suddenly I was in business - I had a castable fly rod. David kept me supplied with flies he'd made and taught me to make some myself.  I was inseparable from that rod. Heavy and stiff as it was it went with me everywhere. And it caught a ton of fish. A ton.  It fished lakes and creeks on family camping trips and outings. It fished the Little East Fork all week long at Camp Daniel Boone where I went as a Boy Scout each summer.

Then one day, with some birthday money in my pocket, I came across a rack of bright yellow Eagle Claw Featherlight fly rods in a hardware store in Hazelwood.  For $20 I bought a 7-foot thing of beauty. My first "real" fly rod. With the flex that it had I could work magic in a cast. I sprung for a Martin reel and an actual 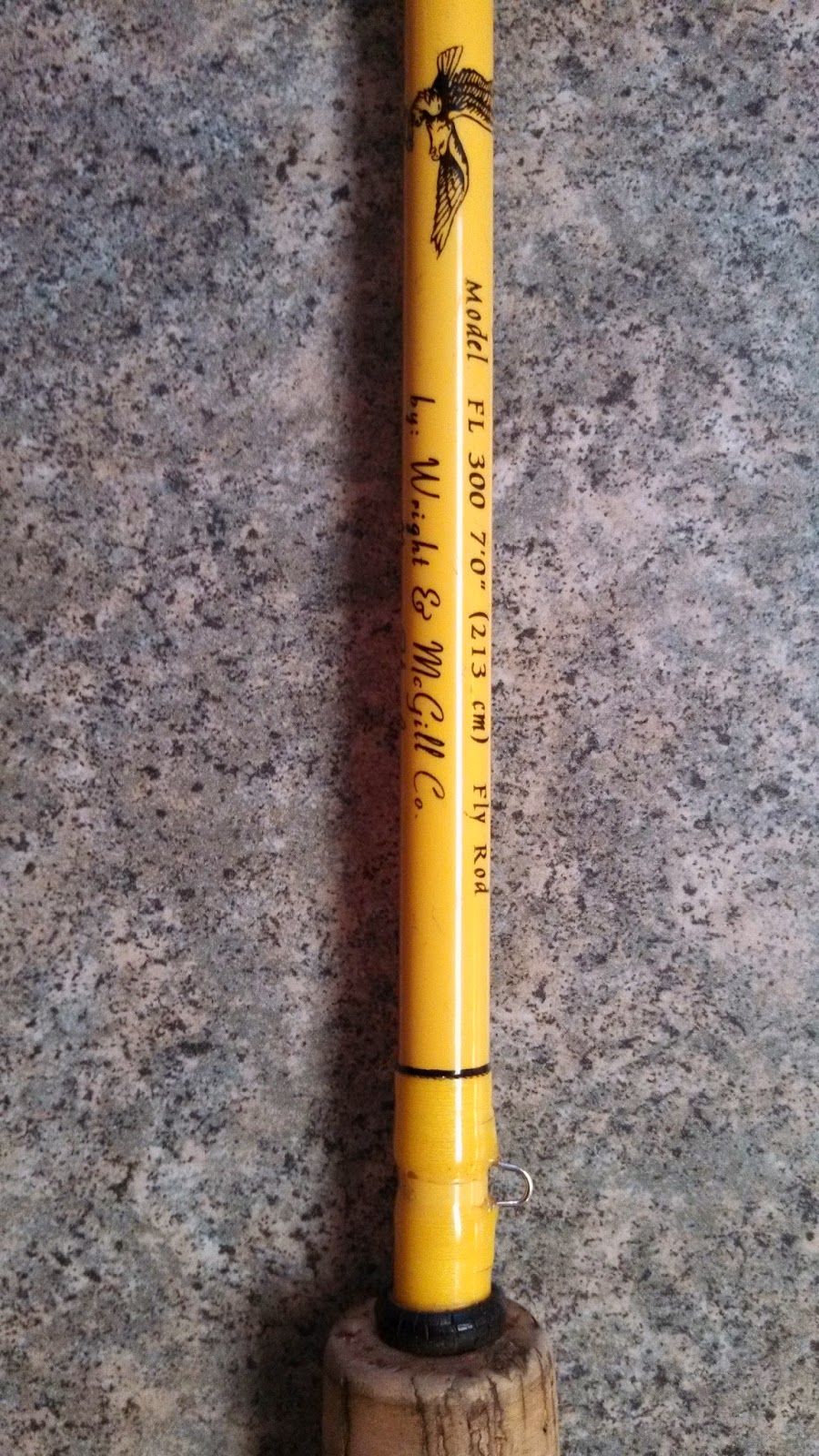 fly line a little while later and became unstoppable. After using that piece of cane for so long I could truly make this rod work for me.
(And apparently these rods still have a following today.  I had to dig mine out of the closet after writing about it, just to feel the old thing again.  Might have to introduce it to some cutthroat this summer - it certainly hasn't seen the light of day in more than 15 years, and has never met a cutthroat.)

Right before college I pooled some money I'd gotten for high school graduation and outfitted myself with one of Redington's early rods - back when the guy still basically made them in his garage and hadn't sold the company yet.  I'd been trying out rods in the parking lot at Roger Lowe's fly shop for a long time.  That rod has followed me everywhere from that moment on, and I'm yet to replace it.  It has taken trout in every tributary on the North Carolina side of the Smoky Mountains and in nearly every stream within a 50 mile radius of Haywood County (and in the Appalachians, 50 miles is a lot - both in distance and in amount of water). Its taken trout in Colorado, Tennessee, Georgia, South Dakota, Washington, Montana, and probably other places I've forgotten about. It has taken largemouth from Mattamuskeet in coastal North Carolina to Texas. It has even targeted creek chubs in a suburban Ohio stream and taken steelhead (yup, it's just an 8-foot 5-weight) in Washington.  And of course a few smallmouth bass along the way.
People give me grief for targeting big trout with spinning gear, as if I were being unfaithful to my fly rod, or leaving my kids on somebody's doorstep.  I don't mind.  I am a fisherman, not just a fly fisherman, and there's no way they could know the richness that fishing of all sorts has brought to my life.
Posted by Bryan Allison at 10:56:00 PM