Montana had a record-breaking February in many areas - lots of snow, plenty of cold.  In my spring fever, as I shoveled drifts off my driveway more often than not and used four-wheel drive most days, I perused some jig fishing websites. There are very few articles and dedicated sites out there when it comes to jig fishing for trout, particularly in moving water.  There are a few.  Helena is fortunate enough to have Kit's Tackle in town, and they've been hard at it in my area much longer than I have.  Two generations of jiggers. I'm looking forward to making their acquaintance sometime, and test driving some of their creations.  I found an article by a man named Cal Kellogg who focuses his jigging efforts on tube jigs, a tactic I also recommend and found myself pioneering on larger trout streams in the late 1990s after taking incidental trout on Appalachian smallmouth water with tubes.  That's the thing about jigs - soft plastics, tubes, bucktails, silicone, maribou - they are versatile, and often applicable to situations far beyond the maker's initial intent.

One evening I came across a website of a guy in Arkansas on the White River. A place that lives in trout legend. I've known about it since I was a kid reading fishing magazines while waiting my turn in a Canton, North Carolina barber shop. One day I will fish it. I found the website because the guy produces jigs specifically for trout fishing. Not many people do. I'm talking about Richard Cross and his Zig Jigs.  After stumbling into his website and checking things out, I shot Mr. Cross an email. I could tell from his website that we spoke the same language. We corresponded via email for a few days discussing things.  In his jig fishing quest, he could never find that "perfect" rod to suit the style of fishing. So he designed one. He has a line of rods called Crossfire rods. The "line" consists of two models - a two piece and a one piece. Talk about a niche. He said he doesn't personally prefer the two piece, but there were enough traveling clients asking for one that he added it to the line up (I may become one of them).  So its really a rod company that (presently) produces only one specialized rod for exactly what I've been honing in my own fishing pursuits lately. I've been on a rod quest myself as I develop my own jig fishing niche, so I was pretty excited to find his. I ordered one, and several jigs to go with it. He emailed me later and said he'd stuffed a few more jigs in the box too for me to try out. He'd fished my stretch of the Missouri River for a few days a couple years earlier and was familiar with where they were headed. 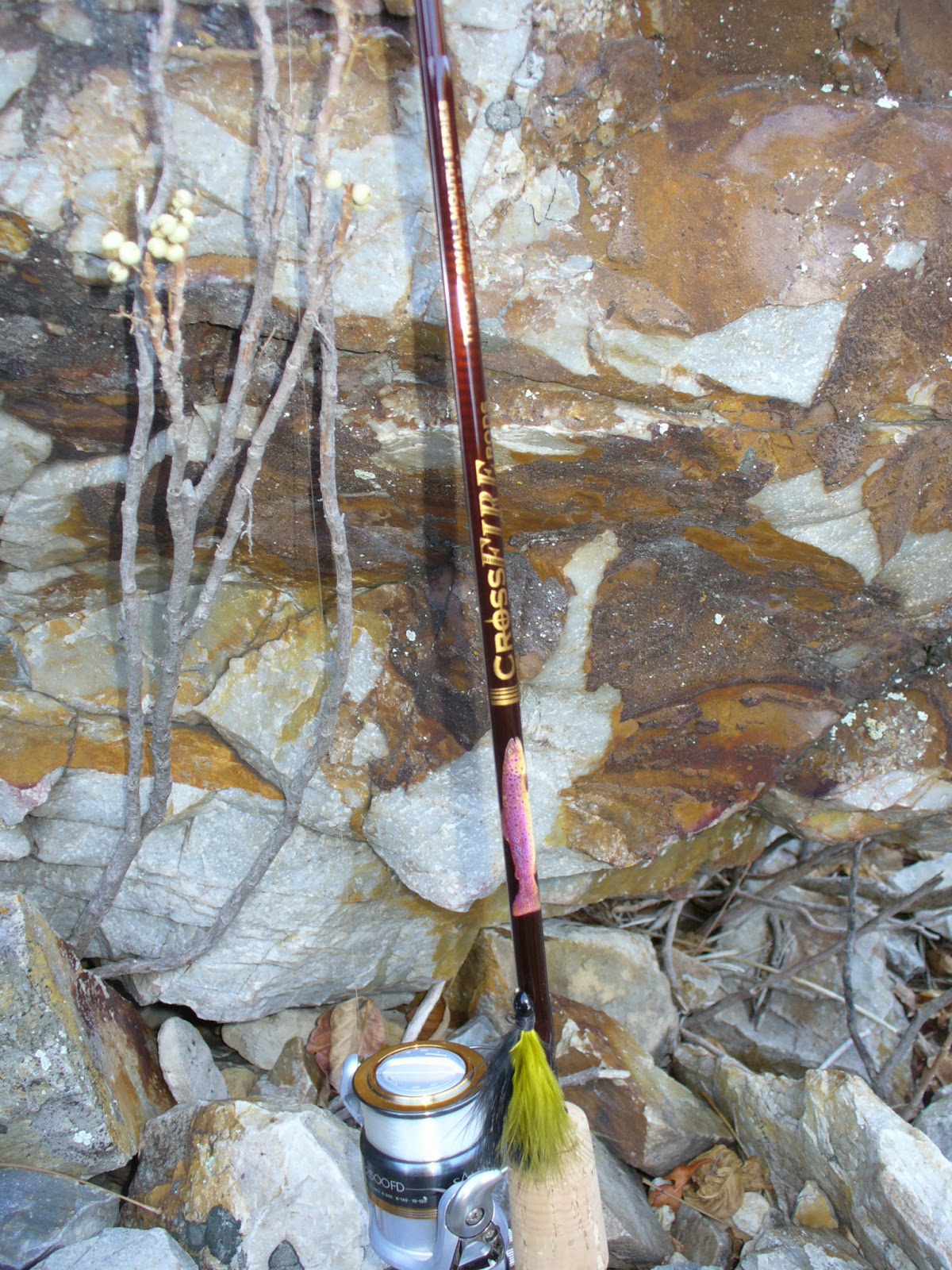 Some snowy afternoon it made it to my doorstep as FedEx busted a drift and spun to stop in the driveway.  I happened to be home and popped the tube open right away.  Six and a half feet of ultra light American-made goodness slid out. Its kind of pretty - deep burgundy color with nice cork grips and quality hardware. Its a foot and half longer than nearly any ultralight rod you'll find in a store and with a lot more backbone.  The handle is also shorter than a lot of my other rods, so there's that much more blank length inherent above the reel seat. It is meant for casting lures as small as 1/32nd of an ounce on up to 5/16ths on 1 to 6lb line.  Perfect.  It has a very fast action - with the majority of the bend in the tip - plenty of flex for absorbing the shock of a sudden run but with all the backbone needed to stay in control.  And just as importantly, that fast tip loads quick in a cast for a zippy toss and brings a jig to life on the retrieve. 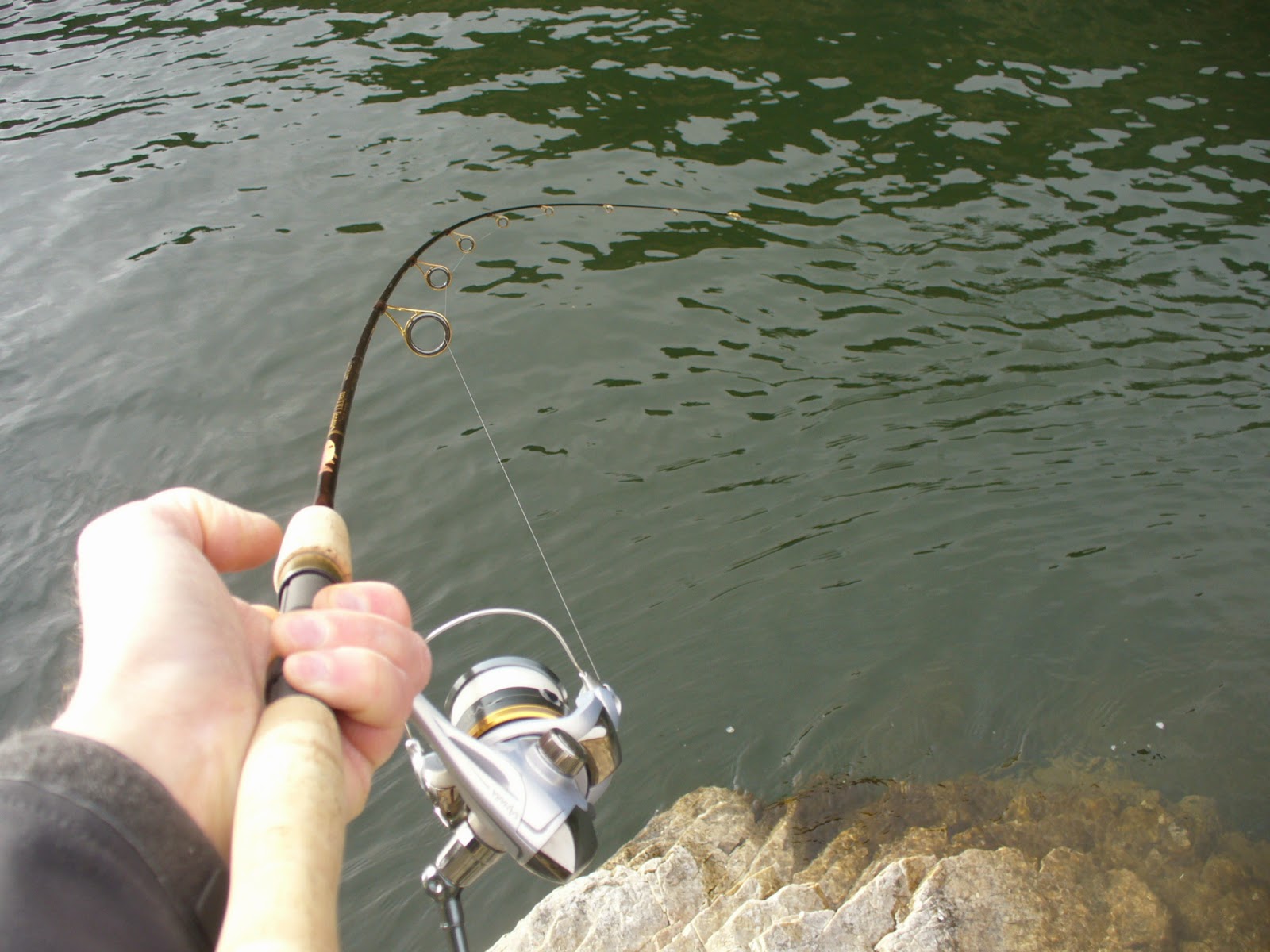 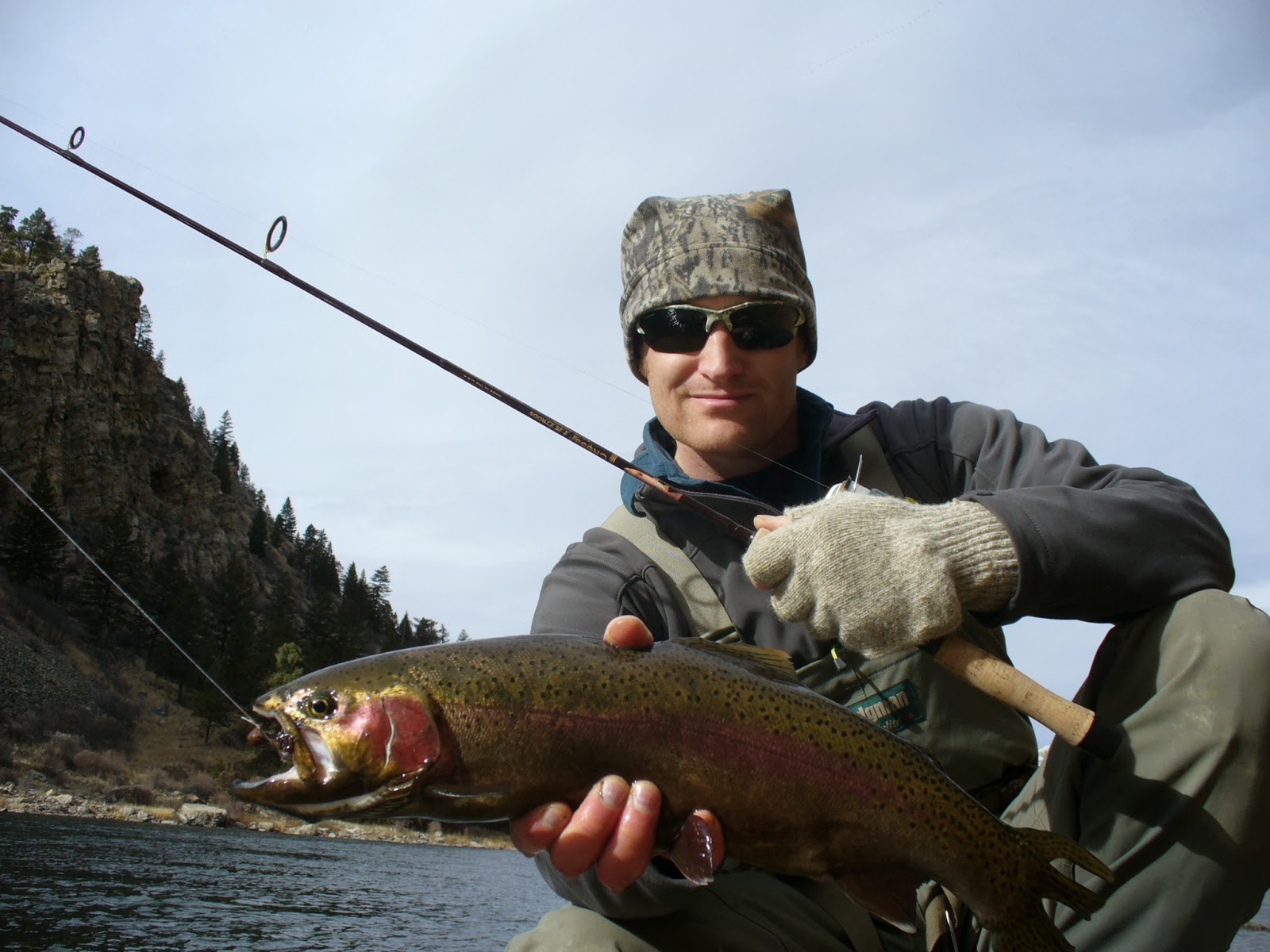 I had to wait an extra weekend to get to introduce it to some water as a weather system blew through.  Finally on the water, I quickly learned that it fires and works a jig quite well, maintaining the constant contact that is so necessary to ticking bottom and pinging sonar back to your fingers as you map the water in front of you.  I've never shaken a rod off a rack in a retail store quite like it. In some ways it seems too stiff.  In others it seems too light.  But in all ways just right for some of my favorite approaches to fishing a river.

The jigs are also nicely built and available in a wide array of colors and sizes.  Mostly they are a basic maribou jig, but the head is almost pill-shaped, tapered to the edges, and slightly offset.  It swims well, slicing current rather than plowing it, and flutters on the fall. Its design makes it ideal for a cross-current cast and a downstream swing, working the lure back against the current.  This is a retrieve I prefer when casting minnow imitating baits on large water, and the head is a similar design to those I choose to use in soft plastics.

Its not as inclined to rise toward the surface as quickly at the tail of the drift as a standard jig is. Maintaining depth for those final seconds of swinging a jig through a nice run can be crucial.  I ordered "safe" colors - sticking with dark greens, browns, blacks - things I knew would work for an initial test drive.  I caught fish on each jig I tried while also mixing in some time with other favorite jigs and plugs.  I should mention that the rod rockets a Rapala Countdown quite nicely, and the fast tip snaps the retrieve to life. 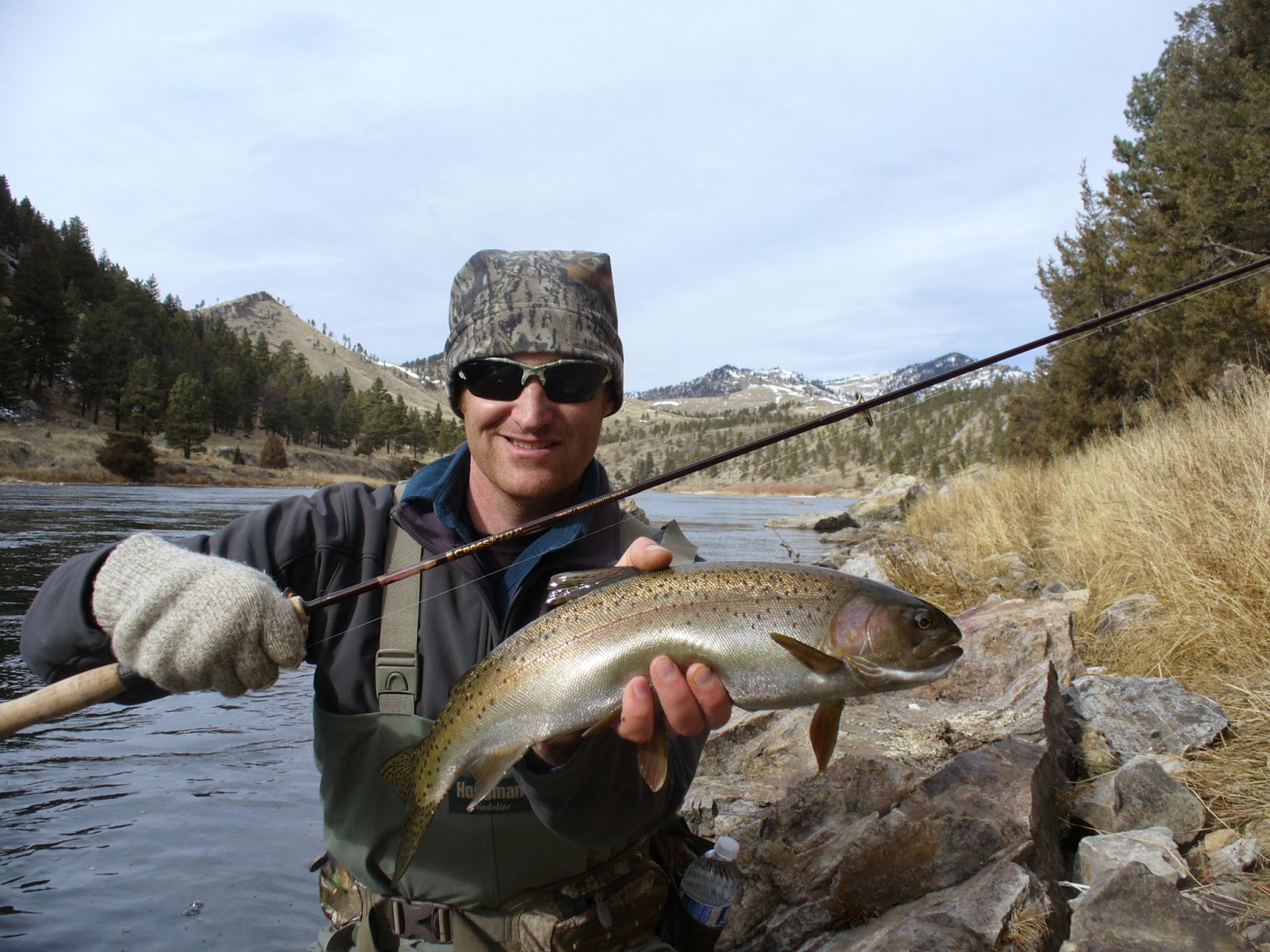 I was wade-fishing on the Missouri, and spent about seven hours working along two and half miles of bank, giving the rod a solid run. Trying to get decent photos of myself featuring the rod and jigs in action was the hardest part. I very typically fish a 1/16th-ounce jig, but I found myself tending more towards the 1/8th, and probably even more toward the 3/16ths in the Zig Jig.  The heavier jigs were better suited to being fished from the bank than the lighter ones,mostly in their ability to reach holding water further from the bank and drop into the strike zone quicker.  It had been a while since I last fished a maribou jig, and I had forgotten that they cast a lot like a badminton shuttlecock, compared with denser material, even when wet.  I think I would likely have spent more time fishing a 1/16th-ounce Zig Jig had I been floating instead of stationary, and the effect of the moving water reduced accordingly. 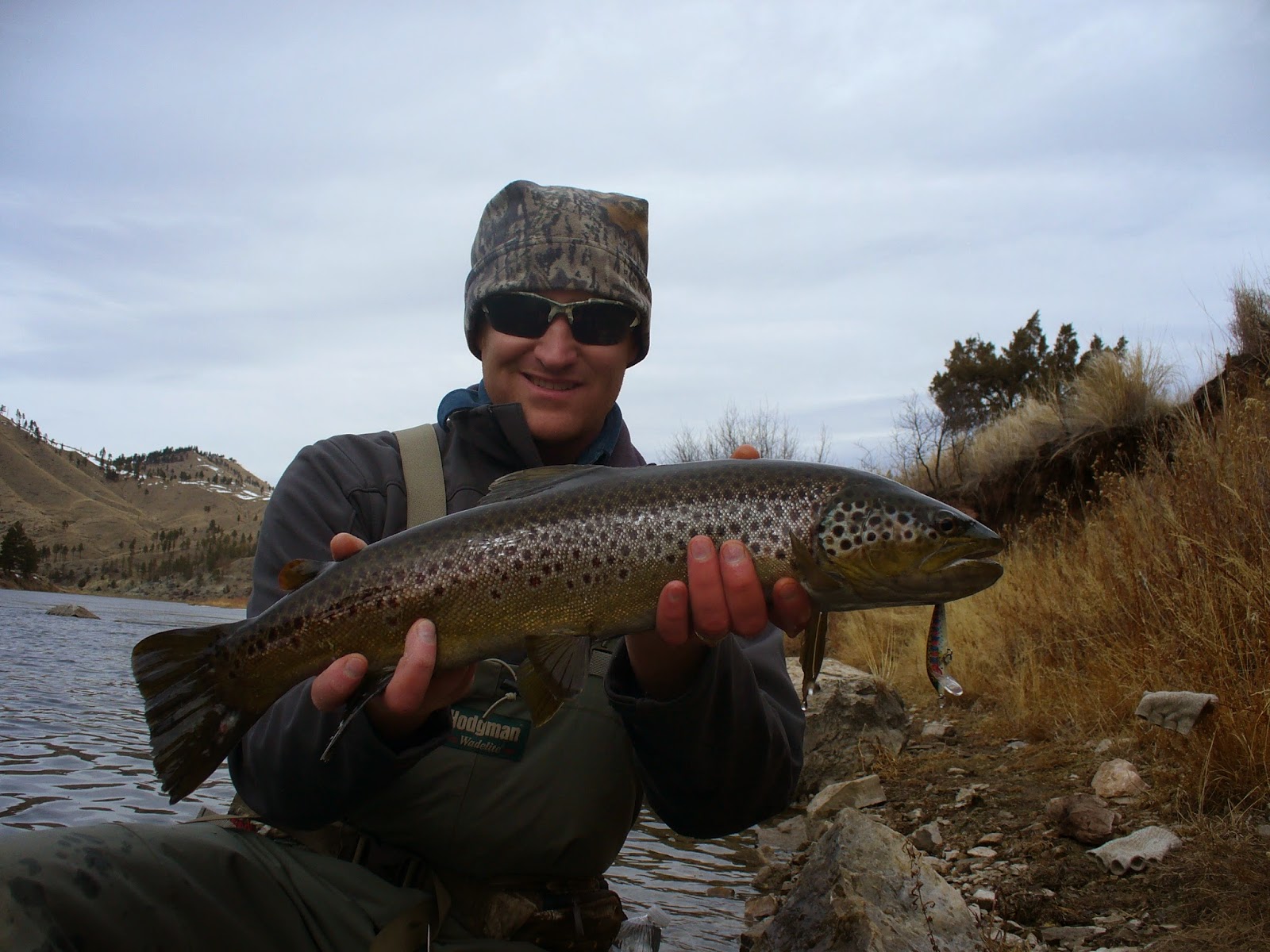 I definitely appreciate the zippy fast action of the rod while it maintains backbone all the way down.  I hit 20 inches enough times on its first day out to give it a pretty good run and plenty of drag peeling.  I do like the jigs, particularly the head shape.  They cut through the current nicely and flutter well.  I'm glad Mr. Cross stuffed in those extra jigs, because among them were the heavier 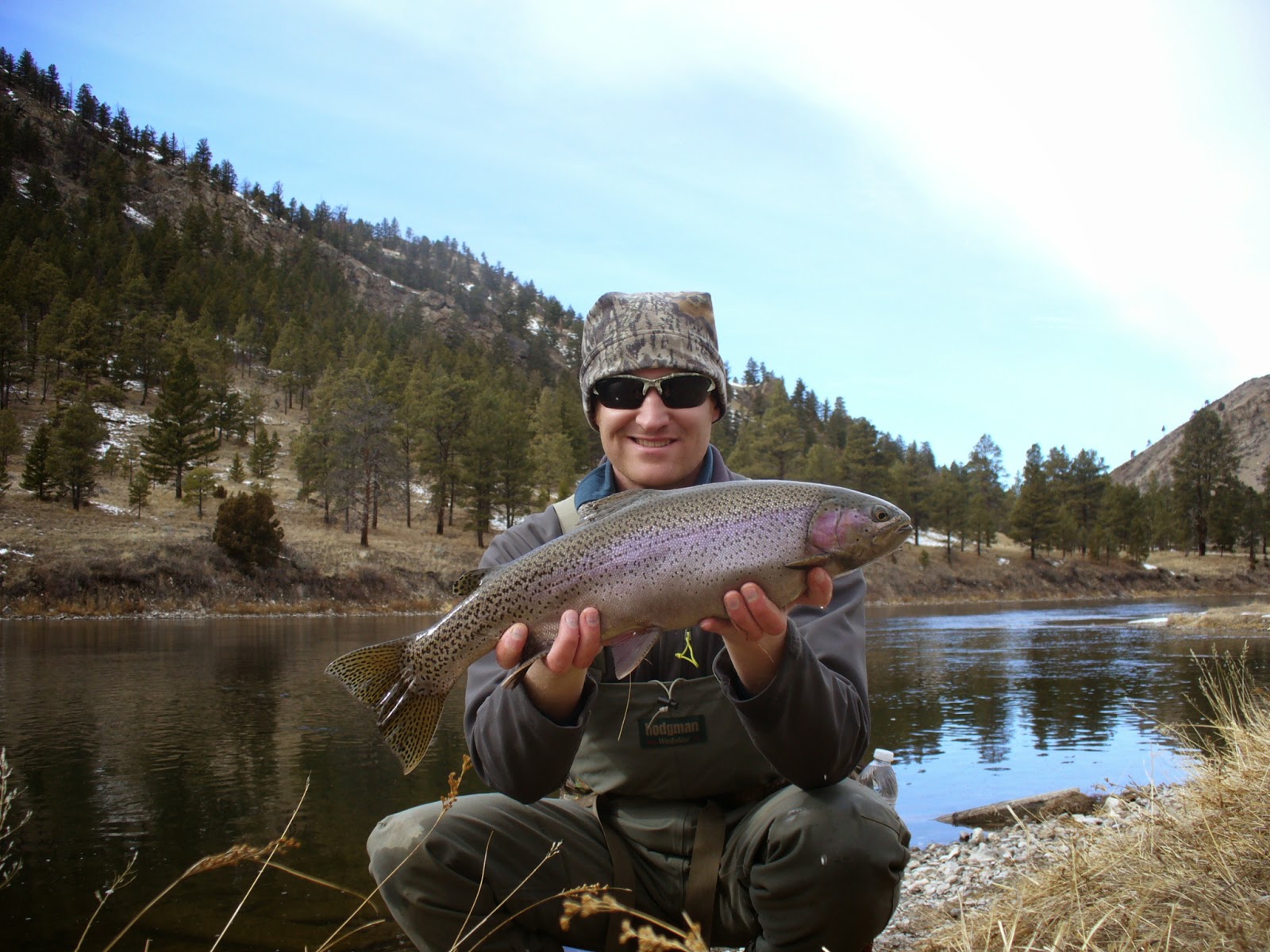 jigs I find myself preferring. When I alternated to some of my regular baits, I still stayed lighter with them - so it was the Zig Jig itself - its castability and behavior in the water - that made me prefer the weight.  I liked it because it added a whole new weapon to the line up when it comes to getting deep fast in places most people won't cast to from shore.