I'm a big proponent of doing whatever your passion is during whatever moments you can squeeze it into your day.  Its what makes you you.  Fishing is no different for me.  Some of my best fish have come on those summer mornings when its light enough to see by 4:30 and 4am finds me slipping through the brush streamside.  There's enough time, and its prime time, to work some water before you head off to work.  This past week produced such an opportunity, despite the fact that early summer light is not here yet, and I grabbed it.

During the years I lived in Washington, I caught several steelhead before work.  There might be time to fish only a hole or two, but you could choose the cream of the stream and make casts to fish that had been unmolested all night before the day began with whatever it would bring.  What better way to start the day.  I'd snicker as I thought of folks busting a gut in a gym while I was peering through morning mist after breaking a sweat to get to the place of my choice.  And then, if it was a lucky day, oh the battle that would ensue.

I did the same thing while I lived in Texas and would be conducting my research work on the coastal marshes.  Before the work day began, I'd slip out knee-deep on a salt flat, shuffle for stingrays and watch for gators, and do battle with steelhead-sized redfish on topwater baits.

Before that I did the same thing on the Tuckaseegee River before class at Western Carolina University.  Where there's a will there's a way.  I'd dress for school, put the waders on over top, and time my extraction from the water so that I could peel the waders, fire up the truck, and make it to my desk - just in time.  Best way I could possibly prepare for an exam....

This particular morning found me slipping down below one of the handful of dams on the Missouri that is more or less on my way to town.  I didn't have much time, so I wouldn't be traveling any amount of river, just focusing on the plunge pool under the dam.  The water was high from recent snow melt.  The entire pool was an explosion of current and not its usual swirling 3-acre eddy.  I casted jigs to foam lines and behind current breaks, looking for fish to be holding up.  Early on I connected with one that took me for a short run and popped off.  Later I hooked a real drag-screamer that wound up sawing me off on some metal debris below the dam before I ever saw what it was.

I found one area that was fairly dead, basically the eye of the storm.  I thought forage of all sorts must be piling up in there and started flipping plastic jigs in hopes of maybe tagging an early morning walleye.  I started catching small trout. Several 8 to 10 inch fish.  Action, but not what I'd hoped.  Maybe I was catching the "forage."  Time was just about up now and I was trying to talk myself into leaving. There was a slab of ice that was creeping down the dam and growing out over the water in a slight overhang.  Water from above was running over it and dropping into the foam underneath.  The "eye of the storm" I'd been casting to had migrated toward this spot, as a swirling plunge pool will do, and I started launching jigs into a nice seam and foam line that had started to form between the two.  A cast or two in a nice solid fish slammed the jig on the first rip I'd given it as it started to sink, and off we went.  A little while later I brought it to the bank, raised it to my camera I'd set up behind me during the fight, and then slipped it back into the roaring river.  Time to go work, and the day was already an accomplishment. 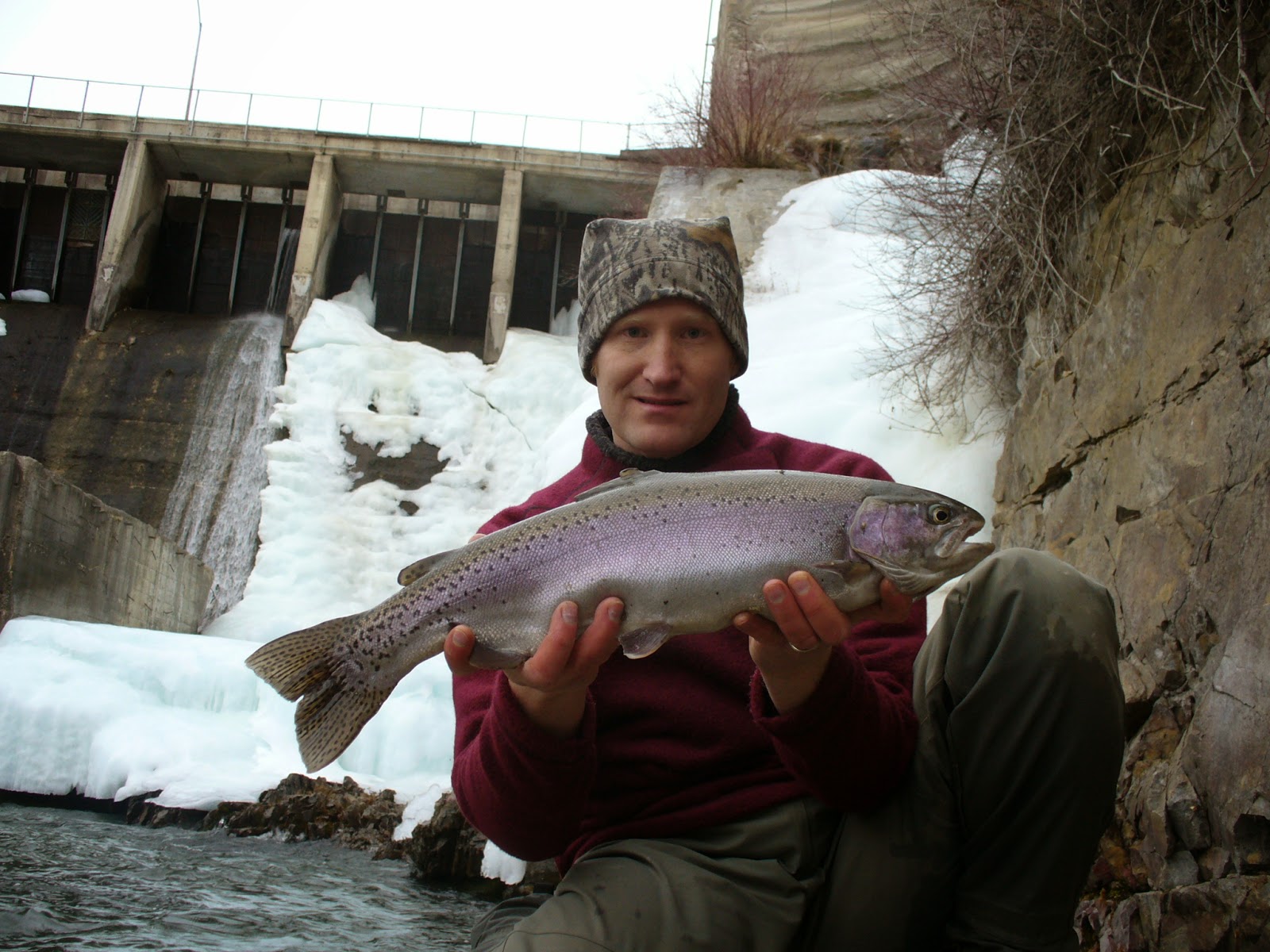