I spent last Saturday with my son jumping from spot to spot as we drove along the Missouri downstream of Holter Dam.  My wife and daughter were having a "girls' day" in Bozeman, so what better to do than hit a stream.  Mostly I just wanted to see what the pulse of the river was as the rainbow spawn gets underway and to get my son on the edge of some water.  He's not the fisherman I was at five years old, or at least thought I was, but he's not opposed to it either.  He doesn't last as long at it as I wish he would, but I'm patient and not pushing it.  The adventure eventually gave way to him climbing rocks, digging holes, and building a spent shotgun shell collection - as I continued to pick apart eddies and experiment. 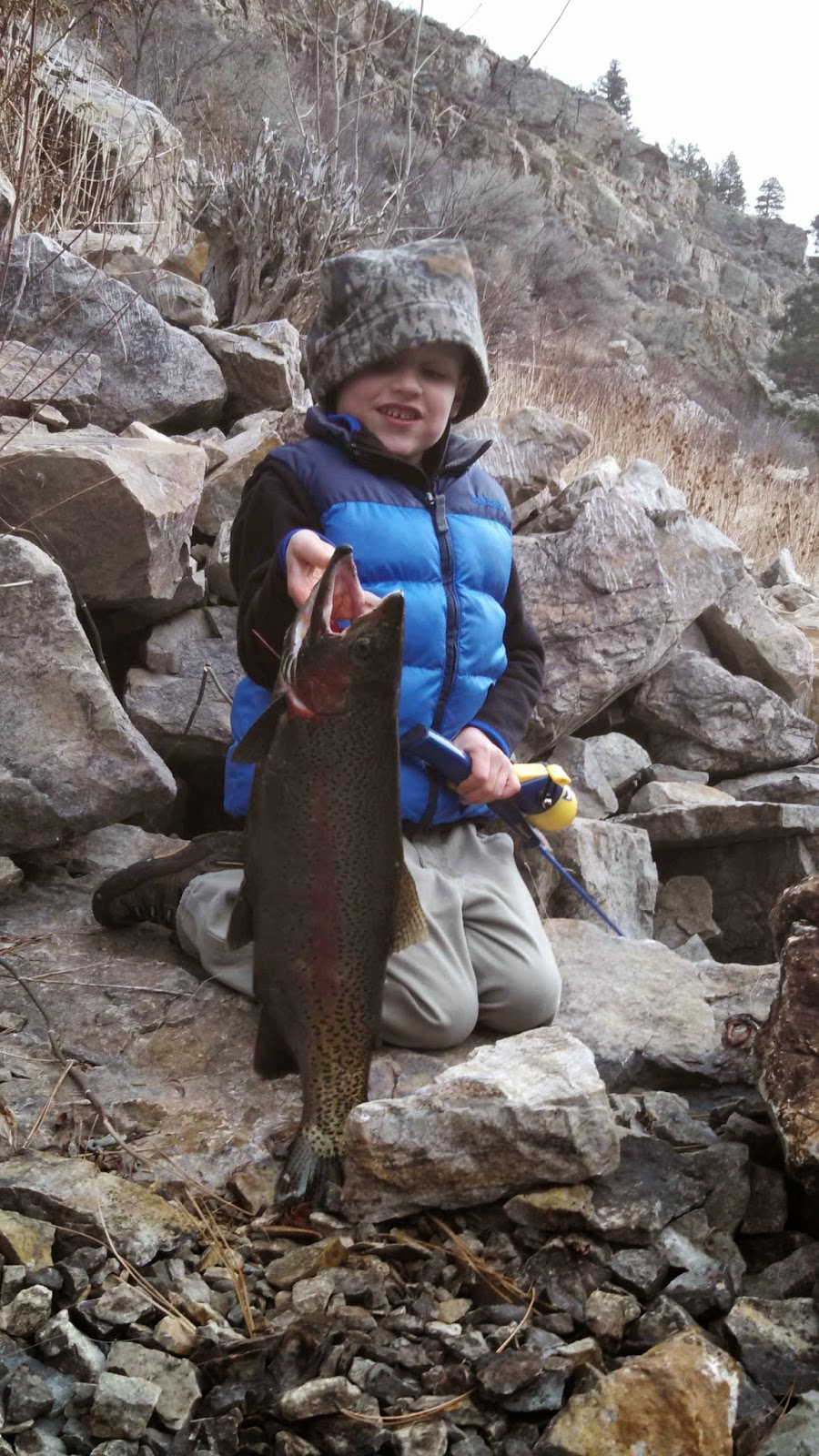 He didn't catch any on this outing, but he was still living on the high of his last trip out when the weather broke and temps stayed above freezing long enough for me to take his little fingers near water.  On that day I'd plunked him down above an eddy that slammed into the bank at his feet and the depth dropped away instantly - meaning that all of his cast, no matter how poorly executed, would be in productive water.  I rigged him up with a nightcrawler on a pencil lead bait rig and cut him loose.  We only caught two fish that particular afternoon, but it was a father-son double to behold.  I had hooked a beauty of a 19-inch rainbow that was performing acrobatics and raking my line all over a boulder when he announced he too had one on.  His, a 22-inch rainbow, had picked his worm up while he'd been watching my fish do its thing.  My fight quickly turned to a haul as I worked as quick as a could to get my fish out of his way and focus on him.  We'd already determined we were keeping fish for the next day's dinner, so I essentially tossed mine to a pocket in the rocks and turned to help him.  I expected mine would likely flop back in the water, but I didn't much care.  By the time I was of any use to my son, he nearly had the fish to the bank.  It cooperated with him uncannily.  His little Batman kiddie pole is no fish fighter, and neither is he.  But my only involvement in the whole fight, other than to keep my fish as far away from his as possible, was to step in the water behind the fish and tail it onto the bank.  He'd managed to do the rest.  He now laughed and laughed as he watched me wrestle two powerful fish at once on a steep, rocky bank.  His was a fish I couldn't allow to be lost though.  I knew he was already envisioning fillets on his plate.  No five-year-old needs to be catching a 22-inch rainbow.  I was in college before I caught a trout that size.


But, here on this current trip, the thought of the possibility of another monster waiting for him in that river didn't spur him on.  Like most any time my son is with me, we kept a couple fish.  A pair of bright rainbows above the 17-inch mark taken 40 miles apart.  In between we landed some nice browns.  We'd walk along rocky banks on the outside of river bends and watch the drift boats go by working the slacker water on the opposite side where rainbows were likely staging on the bars for the spring spawn.  In the pockets and eddies among the jumbled rock we'd flip and pitch jigs as if we were standing in the bow of a bass boat tossing to docks.  I landed one brown after he chased me to the bank and then turned away, only to fall victim to a quick drop of the rod tip and a figure eight maneuver. My son liked working the jigs among the rocks - I think he imagined the jigs on a grand pirate adventure along a rocky coastline.  But the next stop resulted in him spending 45 minutes collecting every single egg he could find where someone had previously landed a fish or spilled some bait.  Those eggs are still in a little box, dried to a crisp in the laundry room.  Some of that pirate's buried treasure I suppose.  The stop after that became a cliff-climbing endeavor, and the stop after that he unearthed a centipede and a few spiders and as he dug into the river bank.  I landed the best brown of the day at that spot and we admired it together before I returned the trout to the water and he returned to the centipede. I'm glad he was there.  I'll miss these days, but I look forward to when he mans the oars on the water while outfishing me too.  Although its probably the little sister we both need to watch out for.... 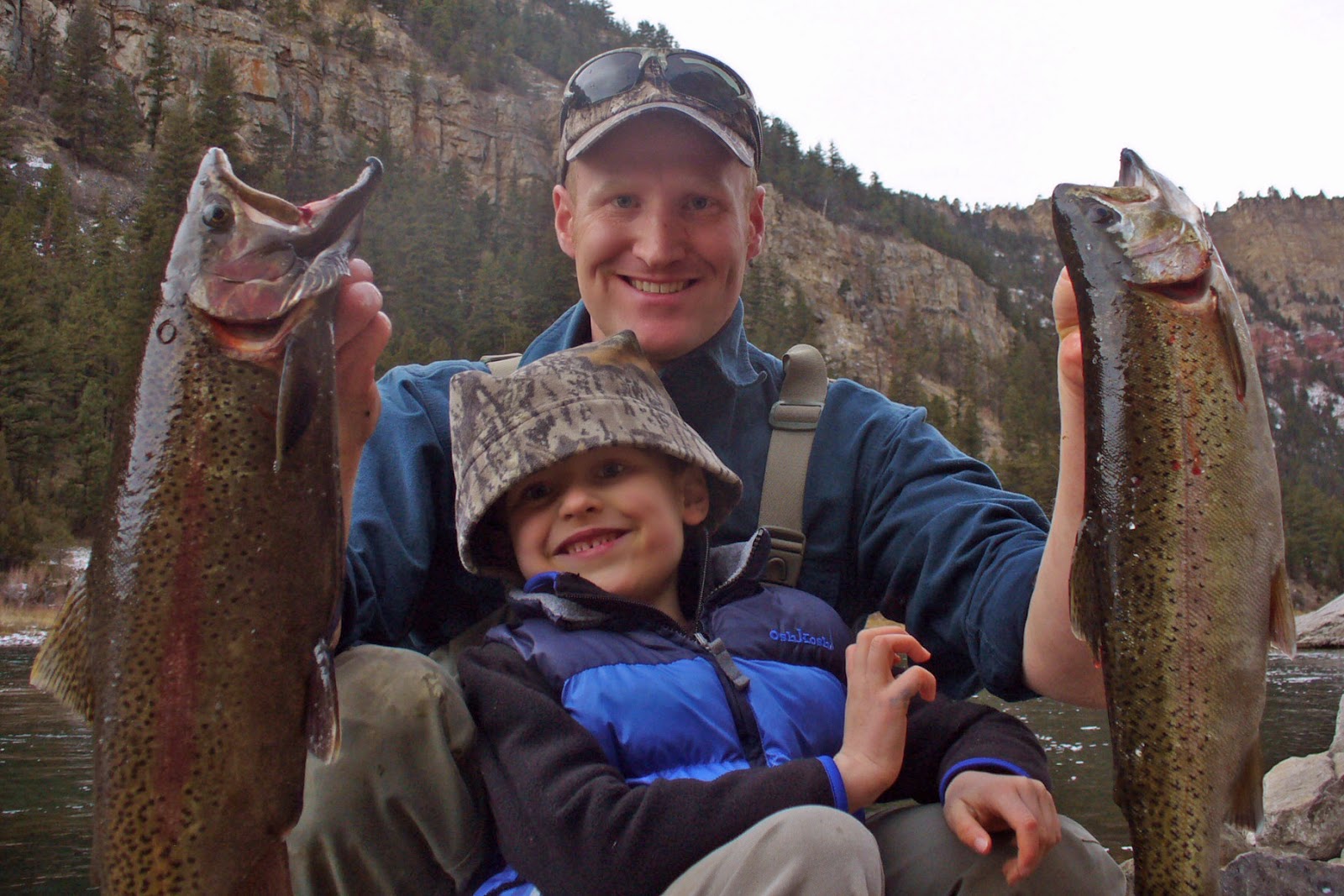