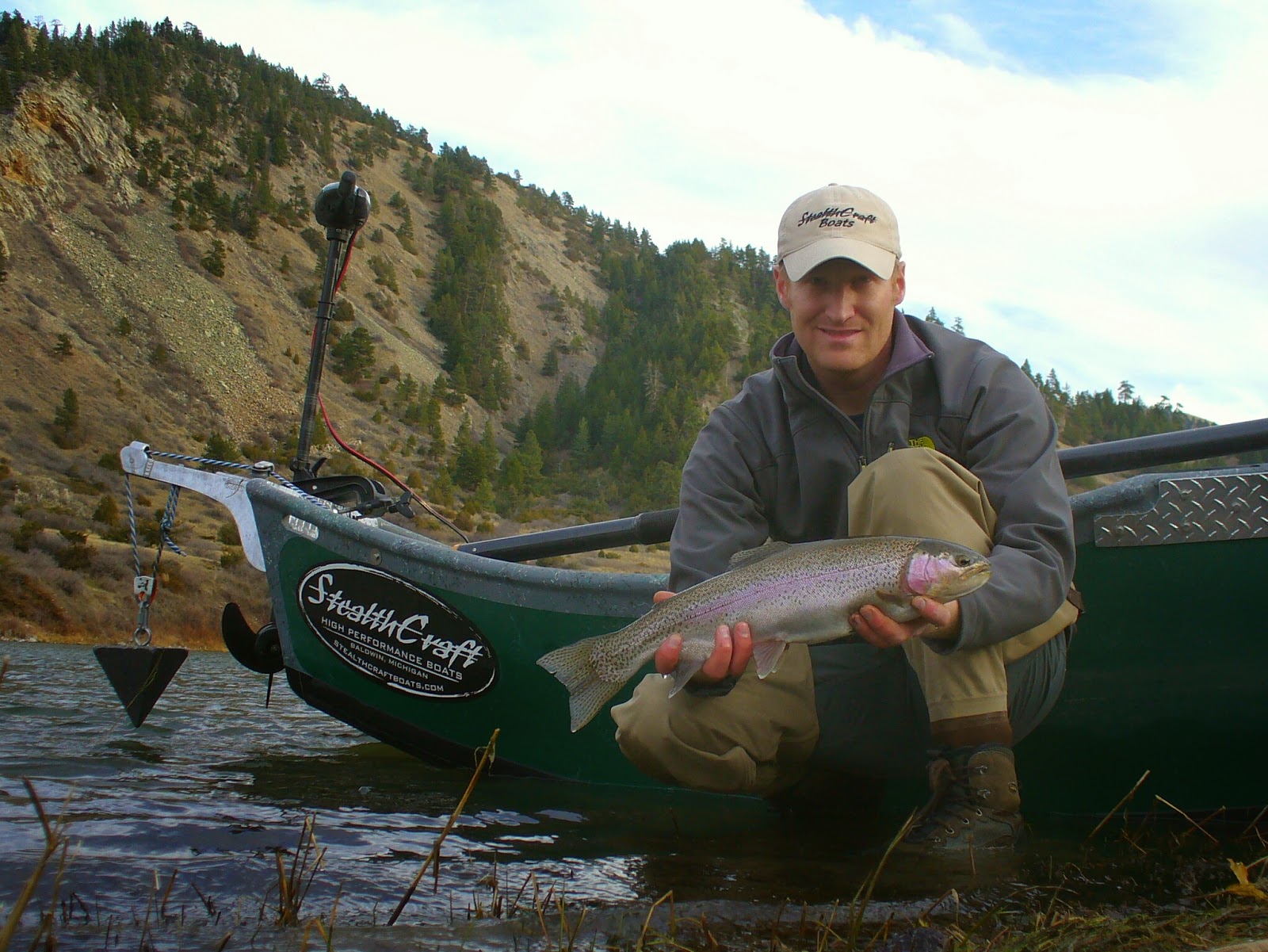 Getting a decent river boat has been on my wish list for about 15 years. I haven't been without one entirely - back when I was in college I got my hands on a narrow 14-foot aluminum boat that I've hauled from coast to coast in the bed of my old pick up. A classmate came into lab one day and, knowing I intended to get a boat, told me she'd come across one in the woods that morning while chasing her runaway dog. I followed her directions and sure enough, there it was. An old aluminum jon boat situated over an abandoned and overgrown chicken coop. It had apparently served as the roof before the forest swallowed it up with disuse. At the time, an aluminum jon boat that I could carry in the bed of my pickup was exactly what I had in mind. Both for rivers and for a particular lake with no boat ramps that required four wheel drive and creative launching.  I tracked down the landowner by going to the courthouse and sifting through land records. Hard to believe I've had that boat since before all that was researchable on the internet. I called the elderly lady up who happened to live a couple counties over and got the answer I was hoping for. "Why sure son, I'd be happy for you to have that." Turns out some previous neighbors had spilled over onto her property in the past with their gardens and such, and so it was a relic of previous trespass anyway. Useless to her. 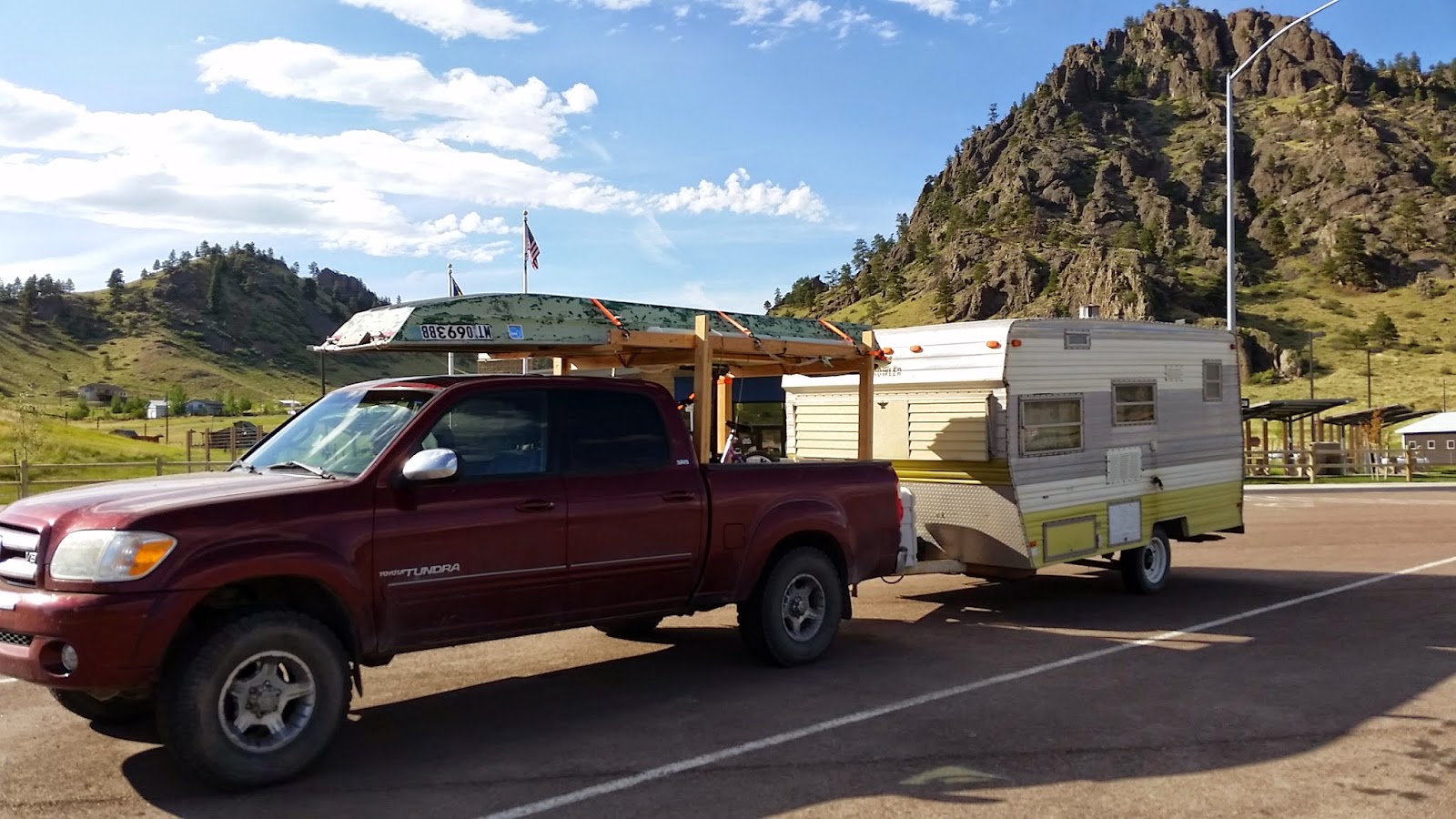 I hauled the boat out of the woods that very day.
I have since banged that boat down rivers in five states. I've launched it in alligator-inhabited southern waters across Texas and Florida.  I've floated it in northwestern alpine lakes on the reflection of volcanoes.  I built a little pad on the blunt bow to receive a transom-mount trolling motor. I reversed the motor's head so that "forward" pulls the boat forward, allowing me to use it like any bow-mount trolling motor or to hover in current with the bow pointed upstream. But it took what might be it's last trip for a while this spring - a float down a prairie tailwater where it boated trout, pike, and walleye.  A superior vessel now sits next to it in my driveway.


I'd been researching river-worthy boats for a long time. Mostly drift boats, but also motorable boats. I came across Stealthcraft, a company in western Michigan that produces a wide variety of motorable drift boats.  Even rowable power drifters they refer to as "all terrain boats" (my next boat). And they build them all out of a lightweight, honeycomb plastic material coated in kevlar composites and fiberglass resulting in a light, tough, and quiet boat. Each boat is custom built to order and the options are seemingly endless, even down to custom artwork on the sides if you are so inclined. I soaked up every bit of media I could find on them. Even followed a boat down the highway I saw being trailered and talked to the owner when he pulled into a gas station.  I'd found the place I wanted to buy from. I settled on one of their smallest models - the 12-foot MiniFly. I wanted to 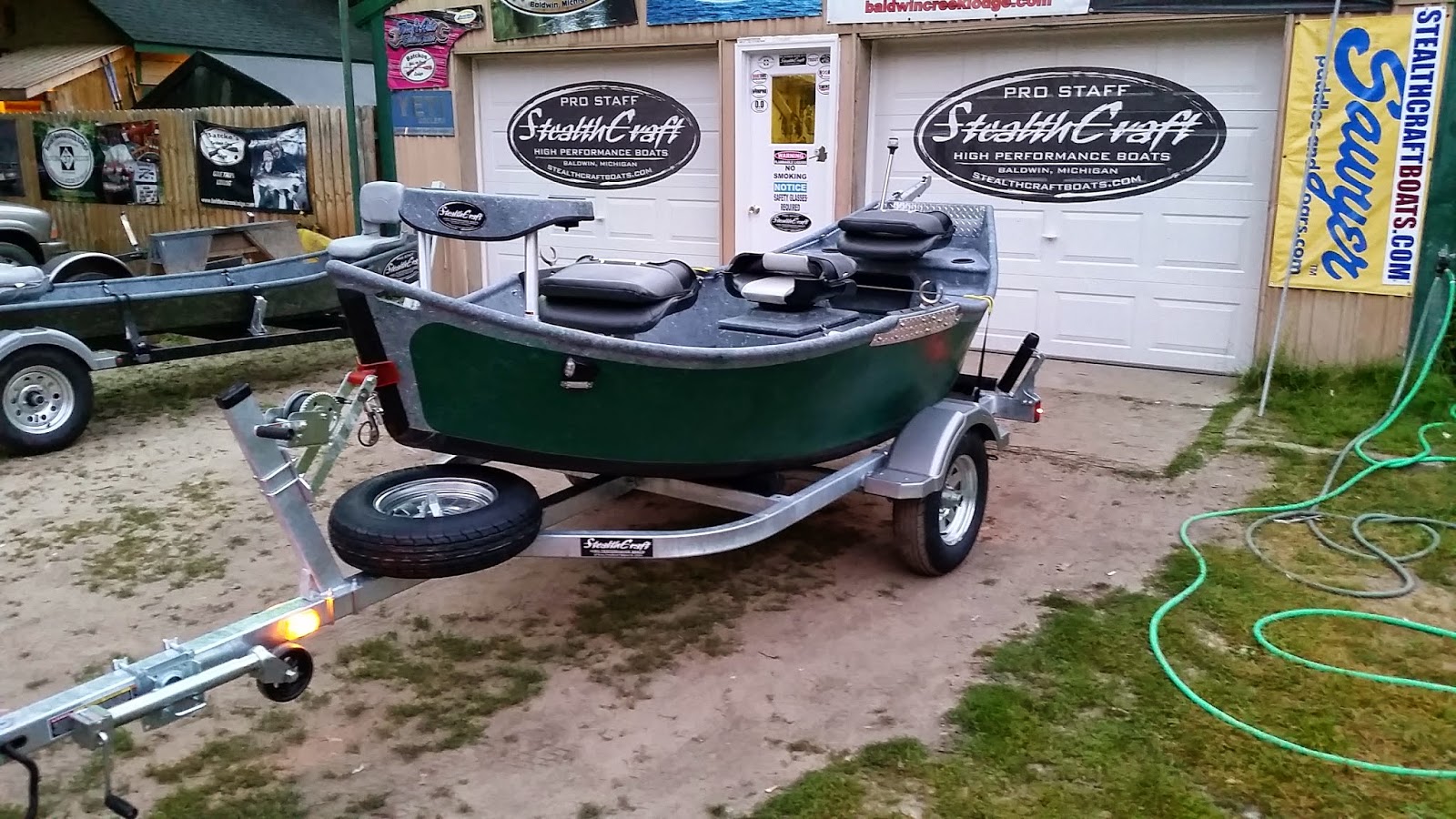 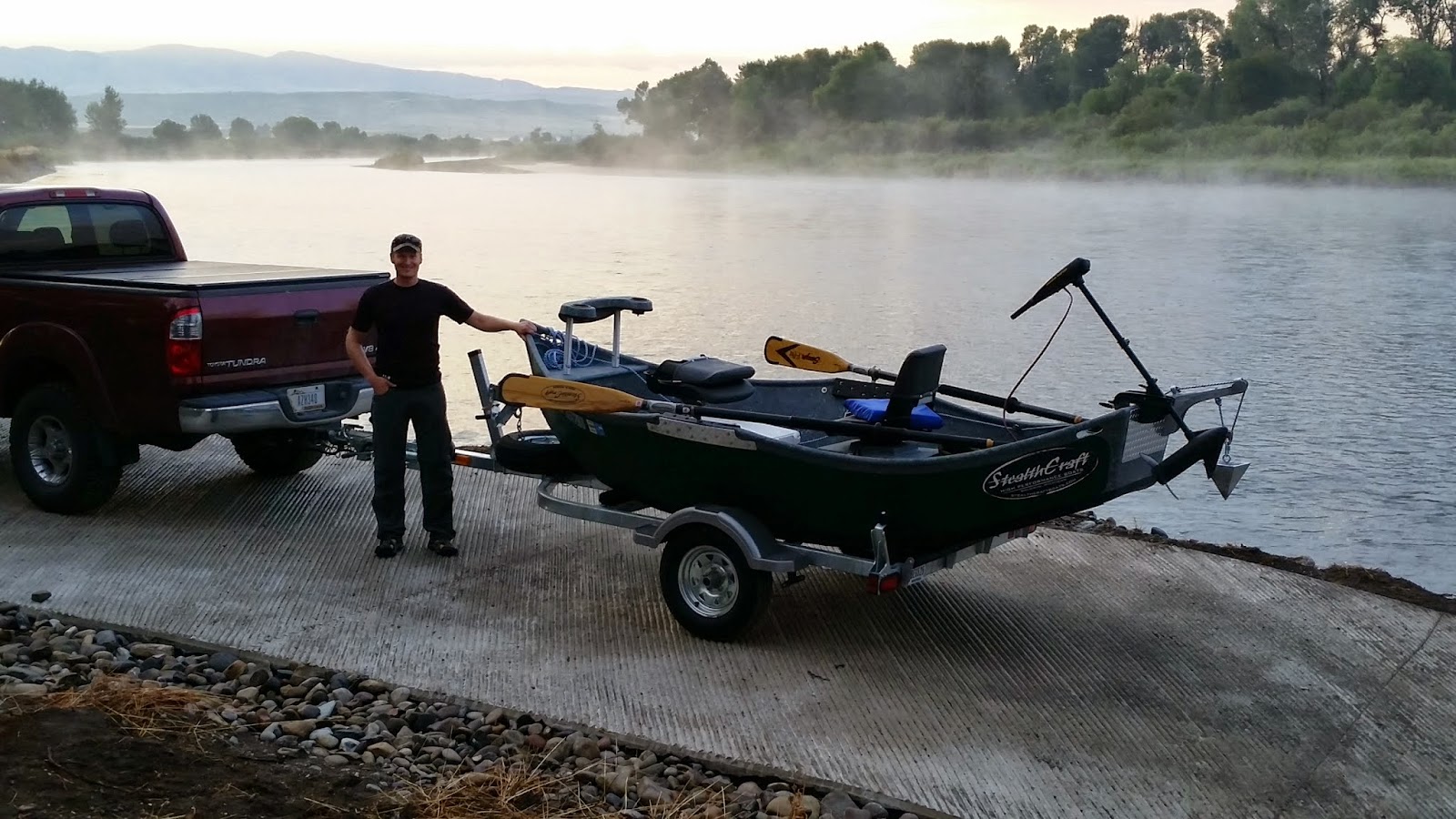 continue my trend of launching anywhere and everywhere, ramp or no ramp. I wanted the boat to be intentionally motorable, yet I wanted a drift boat.  I wanted it to be light. I wanted it to be spacious and comfortable (relative to my narrow little 14ft jon boat), but small and nimble enough to tackle tiny waters.  I added electrical features such as running/navigation lights, headlights, interior lights, and a 12-volt power port for things like cell phones, a spot light, etc. I had it wired to the transom so that I could hook up my electric motor without cords trailing around the interior of the boat. I added an onboard charger for plug-in-and-go battery charging.  I had chine guards installed so I could strike rocks with a little more peace of mind.  I also opted to keep the front deck as open as possible, installing a removable casting brace (rather than a built-in hood style) and a removable pedestal seat (rather than a built-in box seat - strapped down Yeti coolers with seats mounted in the lids are also an option). The open front can be used to hold a large cooler, to pack camping gear, or to carry hunting gear and game. When floating solo I pull out the seat and casting brace and cast from the fully open deck while anchored, with as much space as if standing on the carpeted bow of a bass boat.  And all of this was thousands of dollars cheaper than any other brand I researched - and that would have been with none of my electrical upgrades, if they were even available at all.  I wound up with an affordable, highly functional, and an extremely versatile boat I can use day or night, motor or no motor.  It has three areas of covered storage (even with me opting out of a built-in box seat for the bow angler), a tackle tray that runs half the length of the boat, and racks to hold four rods underneath the tray.  The interior of the boat is fully open, front to back.  A guy can walk circles around the boat when hooked up. 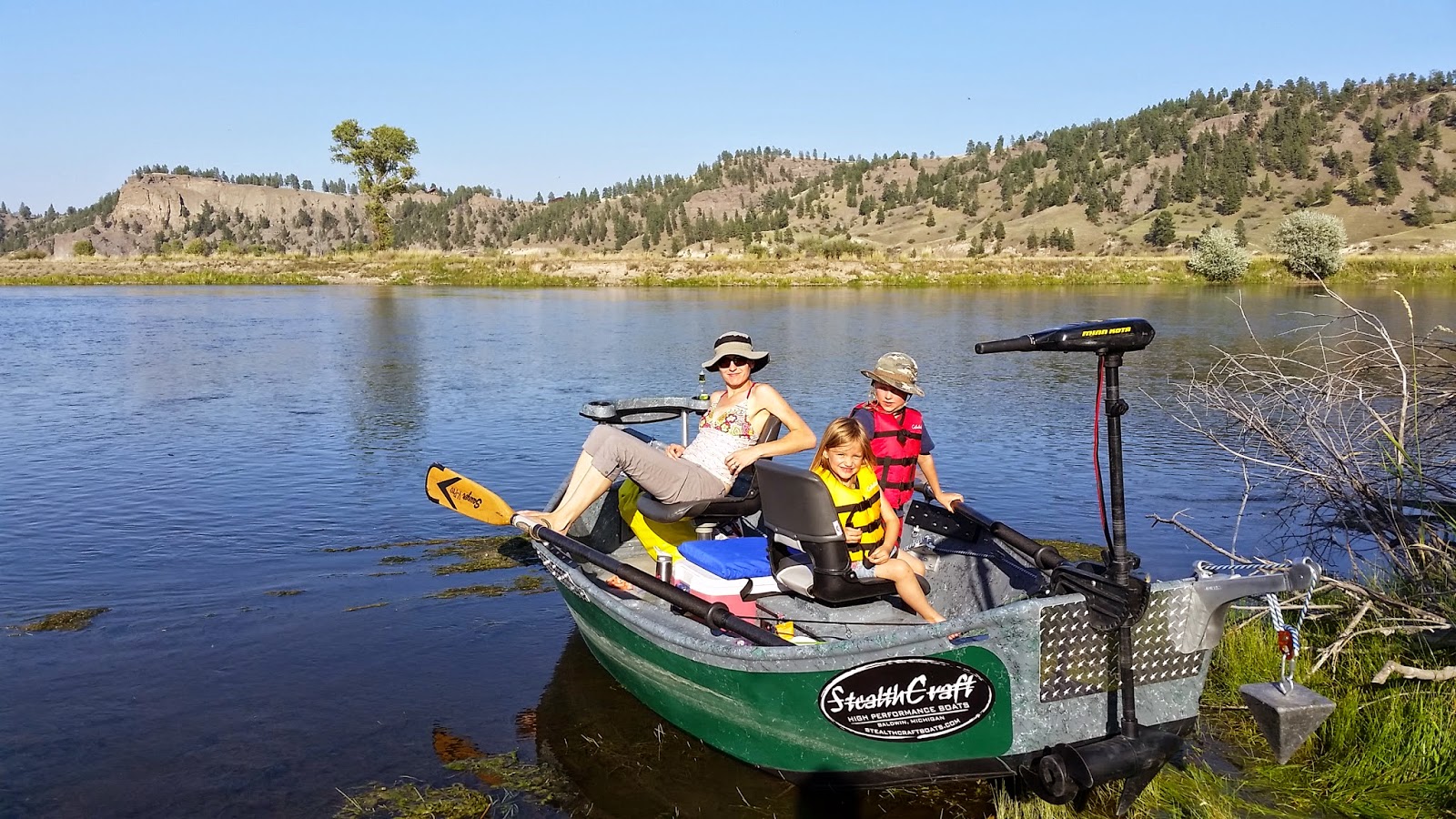 I was fortunate enough to get to make the trip from Montana to Michigan to pick it up. It was nice to meet and visit with Mike Batcke (the owner of the company) and the crew that had built the boat. Even took a little float down a piece of the famous Pere Marquette, the first river in America to have brown trout.  If you pick your boat up in person, Mike will treat you right - a night in his lodge and trip down the river.  You might even get a shirt and hat or two. I was impressed with the area and its rivers, and if ever possible, I will return for some winter steelhead fishing with Steve Cornetet, Batcke's Baldwin Creek Lodge's head guide.  The evening Steve took me down the Pere Marquette I did land my first Michigan brown and failed to bring a much nicer one to the net, but none of the salmon or steelhead runs from the Great Lakes were in the system at the time. 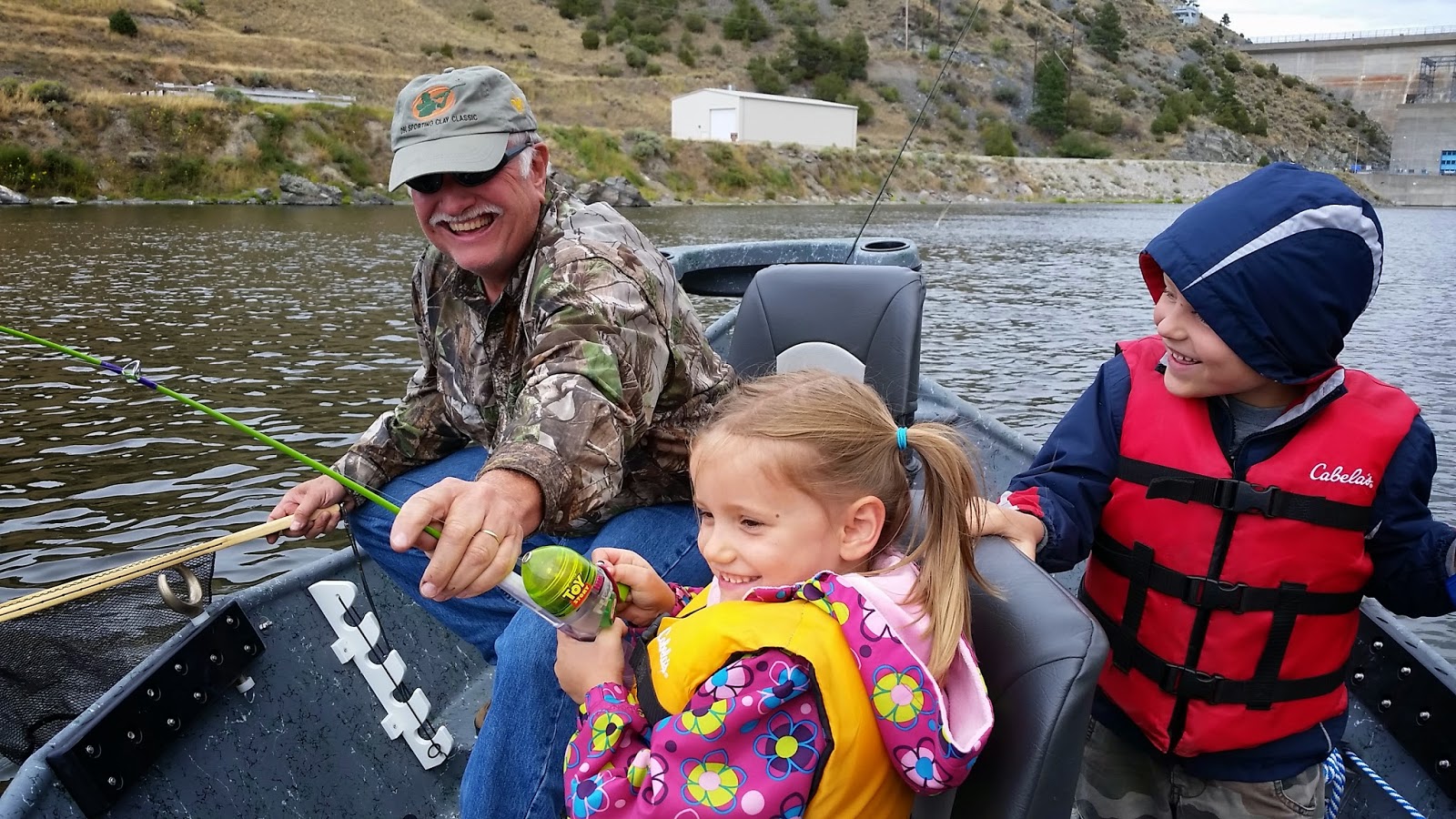 My boat's first trip on water was a walleye float on the upper Missouri River - the stretch above the lakes and famous blue ribbon tailwater sections.  I was pleased that I could easily motor the boat just as I had intended - "rowing" with my electric motor and fishing at the same time instead of being confined to the oars for mobility. The anchor system is easily reached from either the rower's seat or from immediately behind it. I can have one hand on the tiller and one hand on the anchor rope.  This is extremely handy for pulling a sticky anchor, or for dropping anchor exactly where I want to be.
Subsequent trips have taken place on various sections of the famous tailwater below Holter Dam.  The Missouri is my "home" water at this point in my life, and with the boat being so new, it hasn't been launched in another stream yet.  2015 will change that.
It has carried various members of my family, a number of friends, and some folks I'd never met till the 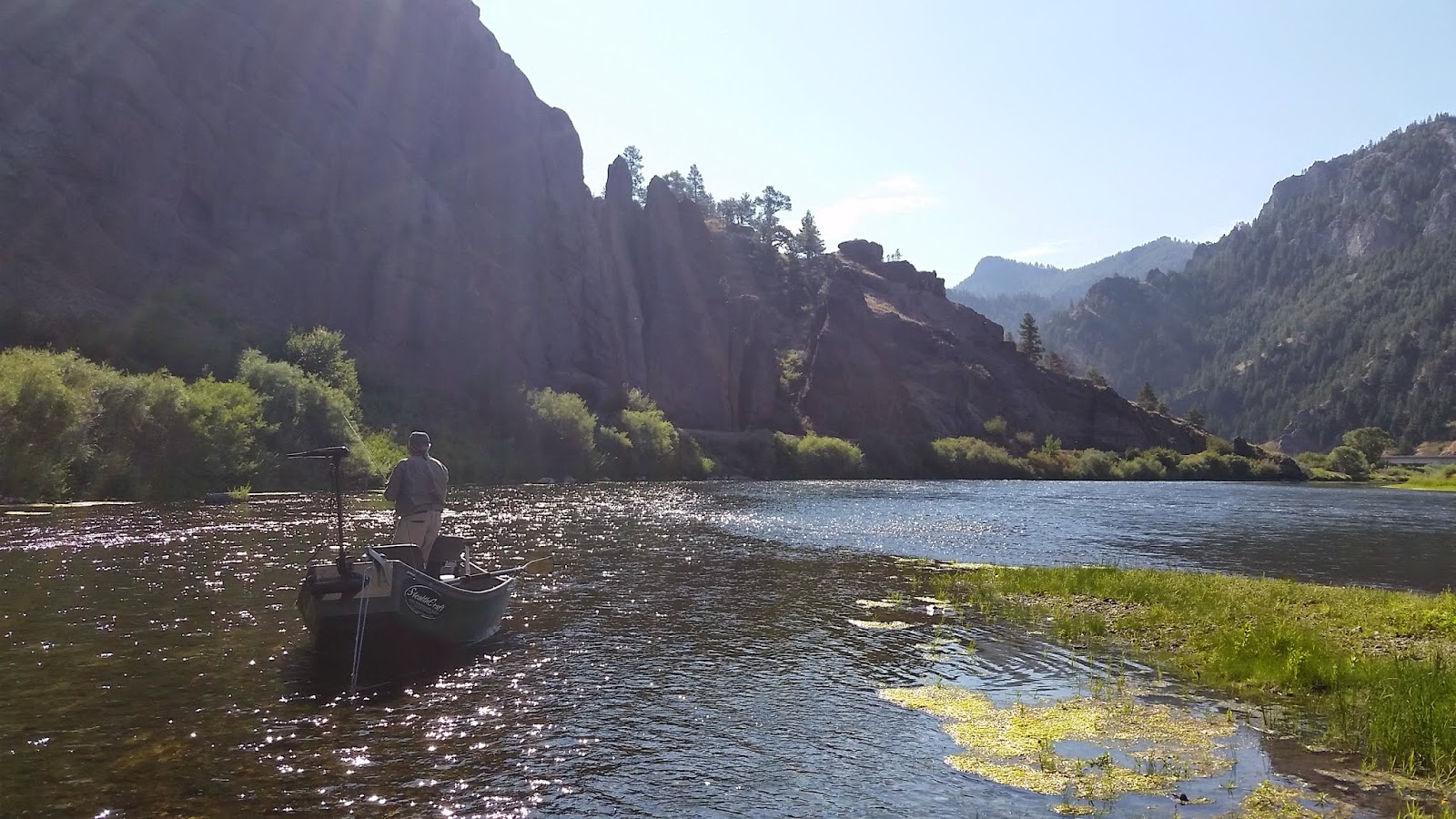 days we fished.  To buy the boat I sold a pickup truck I'd had for 17 years.  The first vehicle I owned.
All the things I'd done in that truck!
All the places it had carried my old aluminum jon boat to!
And now its legacy will continue in the form of a fine boat.  One that both my kids have already caught fish from, and will likely continue to for much of their lives.
I've floated it in stellar Montana summer weather.  I've floated in an all day down-pour where twice I had to drag the boat on land and pull the drain plugs.  I've floated with snow blowing sideways. I've broken ice out of the floor with a shovel. 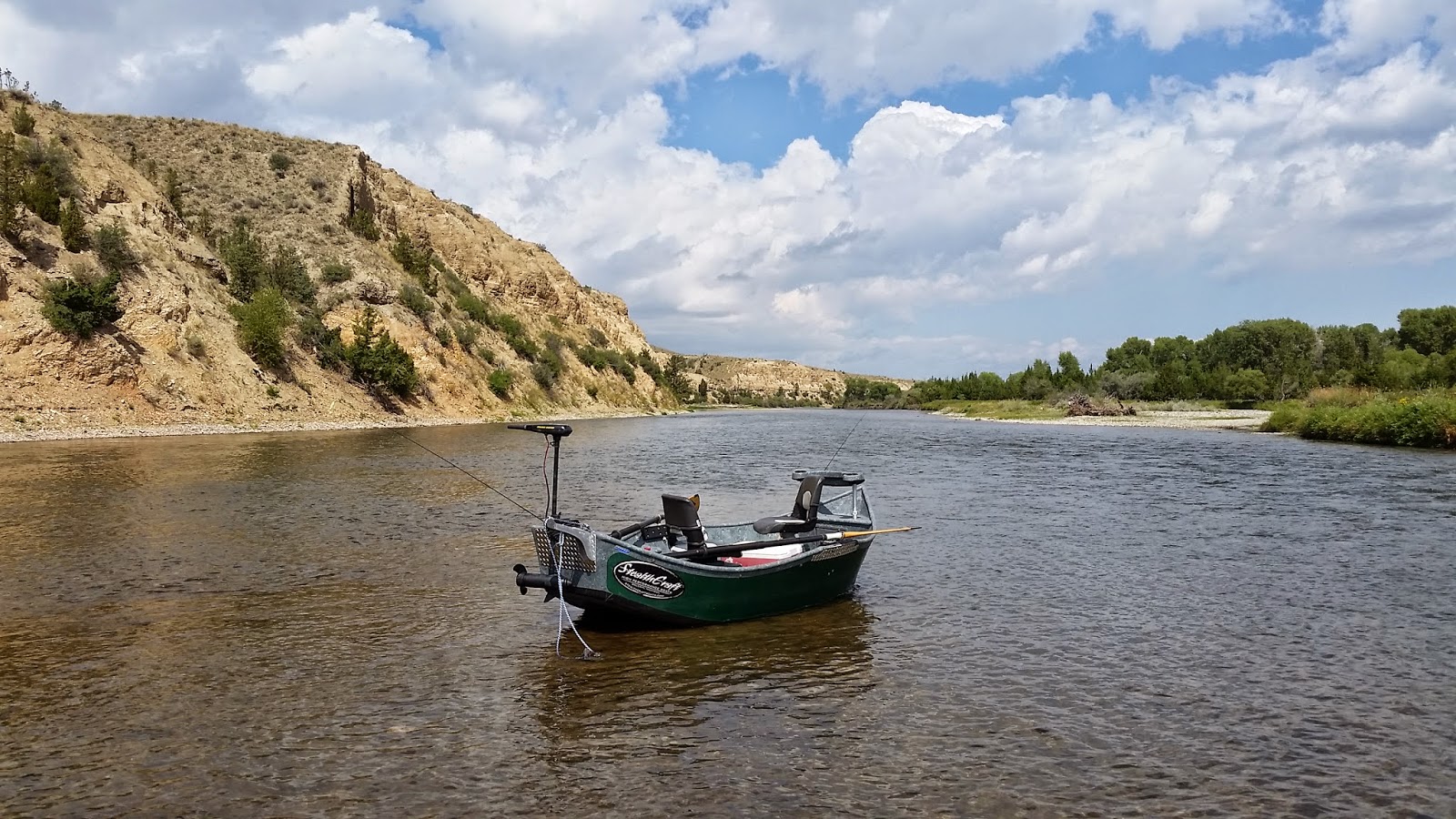 Its been a good boat, all six months of its young life.  I admit I row it infrequently, but when I row, it responds well. Spins on a dime. Tracks nicely. There are five oarlock positions and an adjustable (and removable) foot brace on the floor.  Even at just 12 feet it carries three folks fine.  I've spent my time with a fisherman on each end while I row and I've also stood in the stern at the electric motor, while all three folks fish.  The boat is absolutely ideal for two fisherman, and comfortable enough for three that I don't hesitate when the need arises.
Mostly I stand by the transom and guide my drift with the tiller of my trolling motor, hopping onto the oars whenever the water is too shallow for the motor.  Of course that will change on swifter rivers, but in flow where it's possible, using the reversed trolling motor is working as I intended - just as I used to do on my jon boat for all those years, but in much more comfort and functionality.  In future trips I'll be sticking one of my outboards on it and puttering up portions of the Missouri and other slower rivers where ramps are infrequent.  I won't be able to cruise like a jet boat, but I'll likely be one of the only drift boats on some of those stretches.  I'm sure it will see use in lakes as well.

So far I have only one complaint - it takes forever to launch.... if anybody else is around that is.   I spend so much time fielding questions and giving tours of features while at a ramp that it seems half my day of fishing has slipped away by the time I'm floating.  Oh well, I understand the attraction.  I should have brought a stack of business cards back from Michigan.... 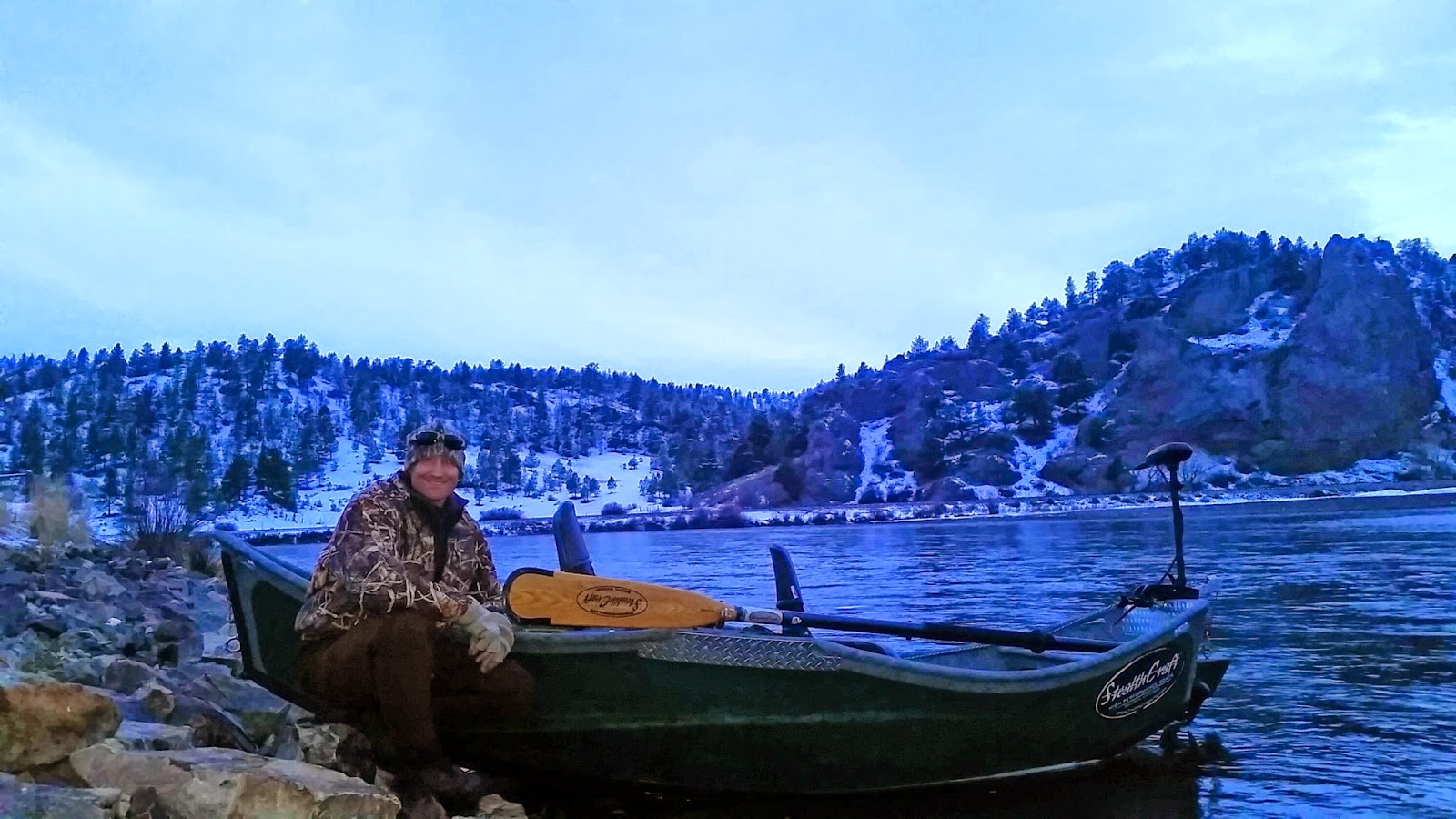 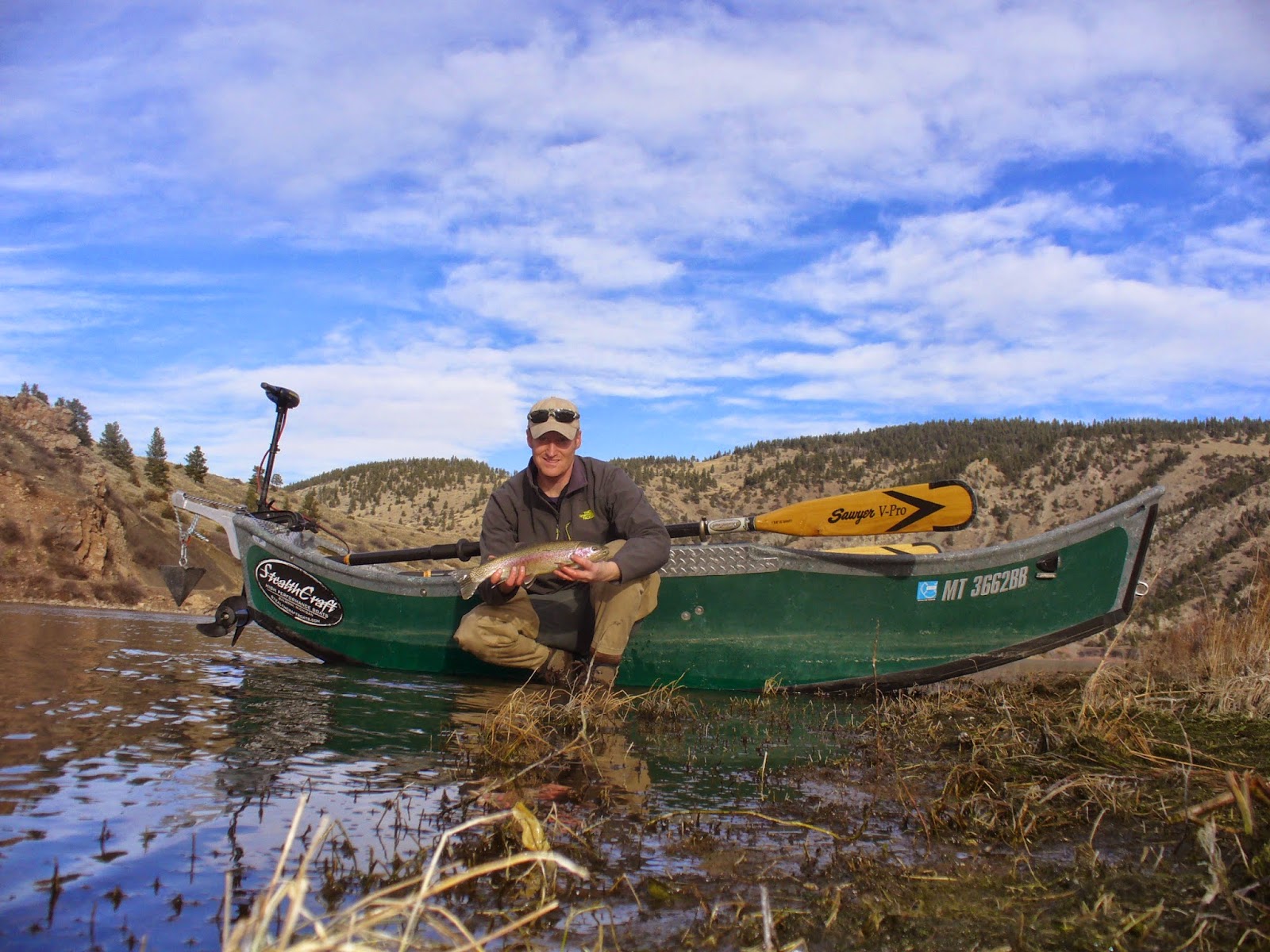 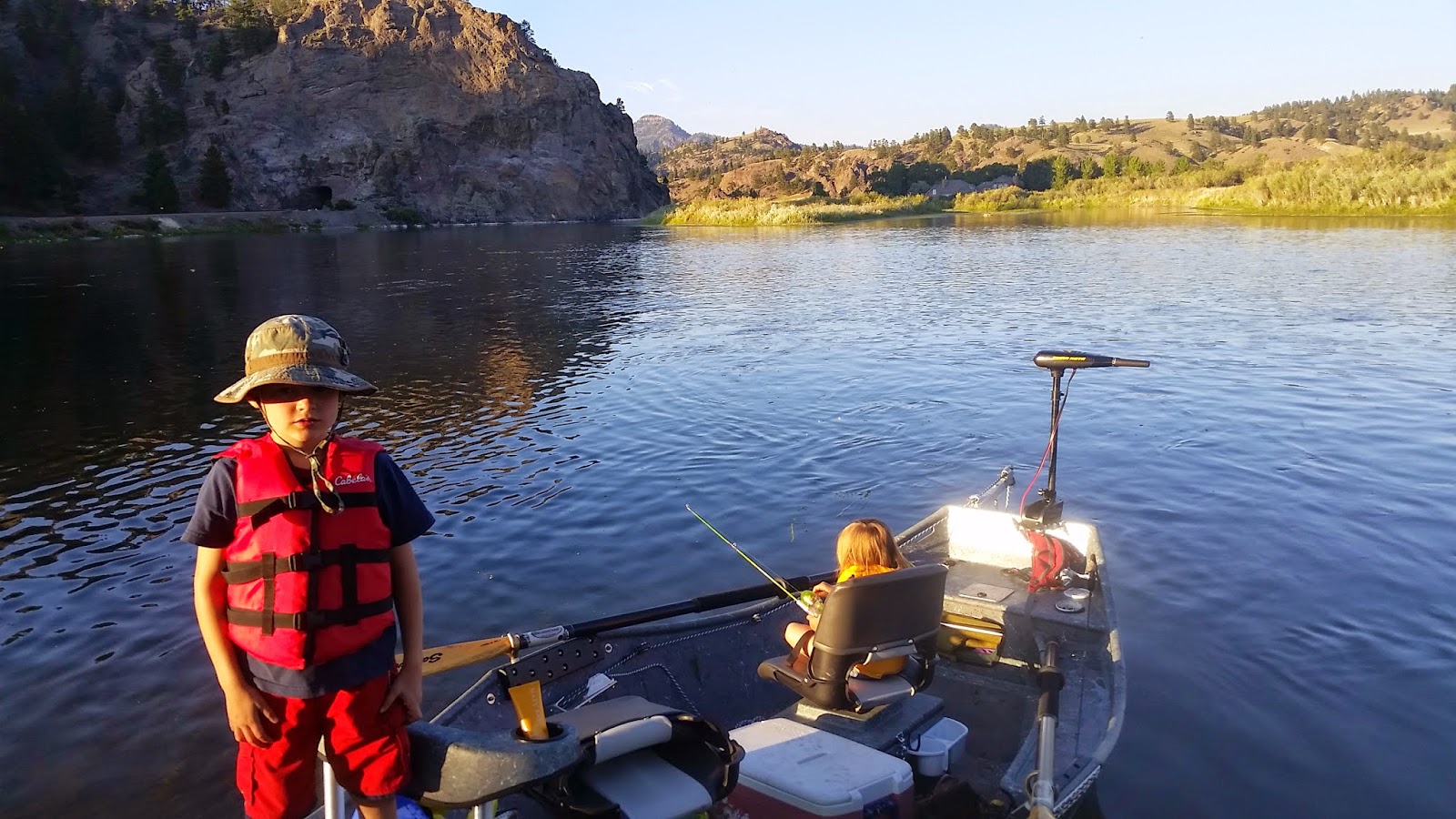