The hot days of winter 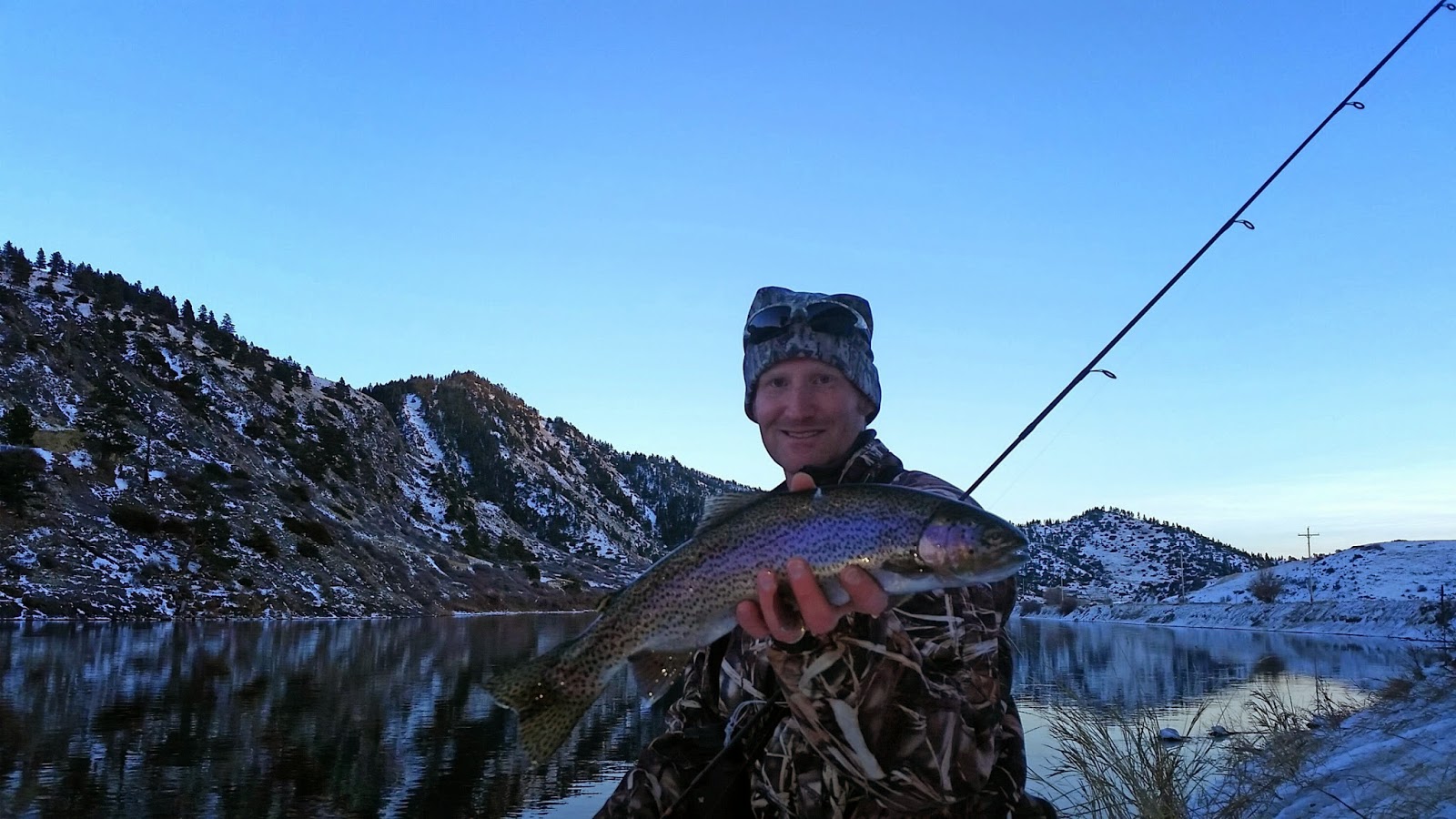 Lately my free time has been poured into hunting season. Elk, antelope, and deer called me away from water for most of three months.  During that time I think I fished only four times. For me that's not much, although one trip resulted in one of my biggest browns to date. A post-spawn bruiser hooked in moonless blackness.
November and hunting season wrapped up with temps around zero. But with the first week of December came a warm-up to near freezing. And field work was on my calendar.  Which means travel.  Which means passing water. And this time of year, it means water void of people. And I can't pass water without stopping.... 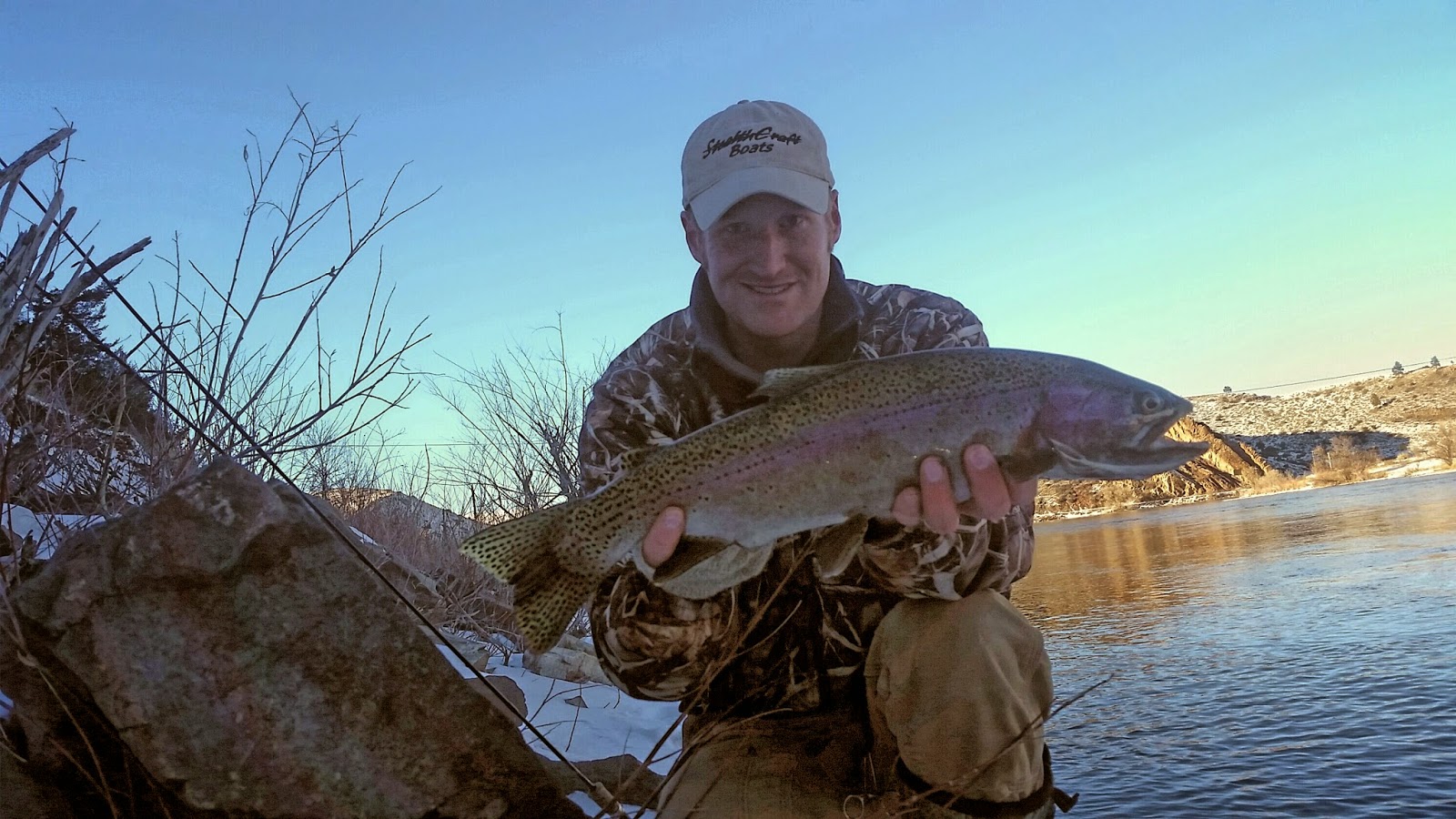 I needed to head north along the Missouri for field meetings the following day. So, with half a work day behind me and four hours of driving time ahead, I hit the river while en-route for the last couple hours of ever-shortening daylight. The water was steely perfect, and no one was around. I couldn't quite tear my eyes off the hillsides since they'd been glued there for three months scanning for animals, so I wore my binos and checked out the deer as they appeared. After all, the rut was still peaked. And sometimes bighorn sheep show up. 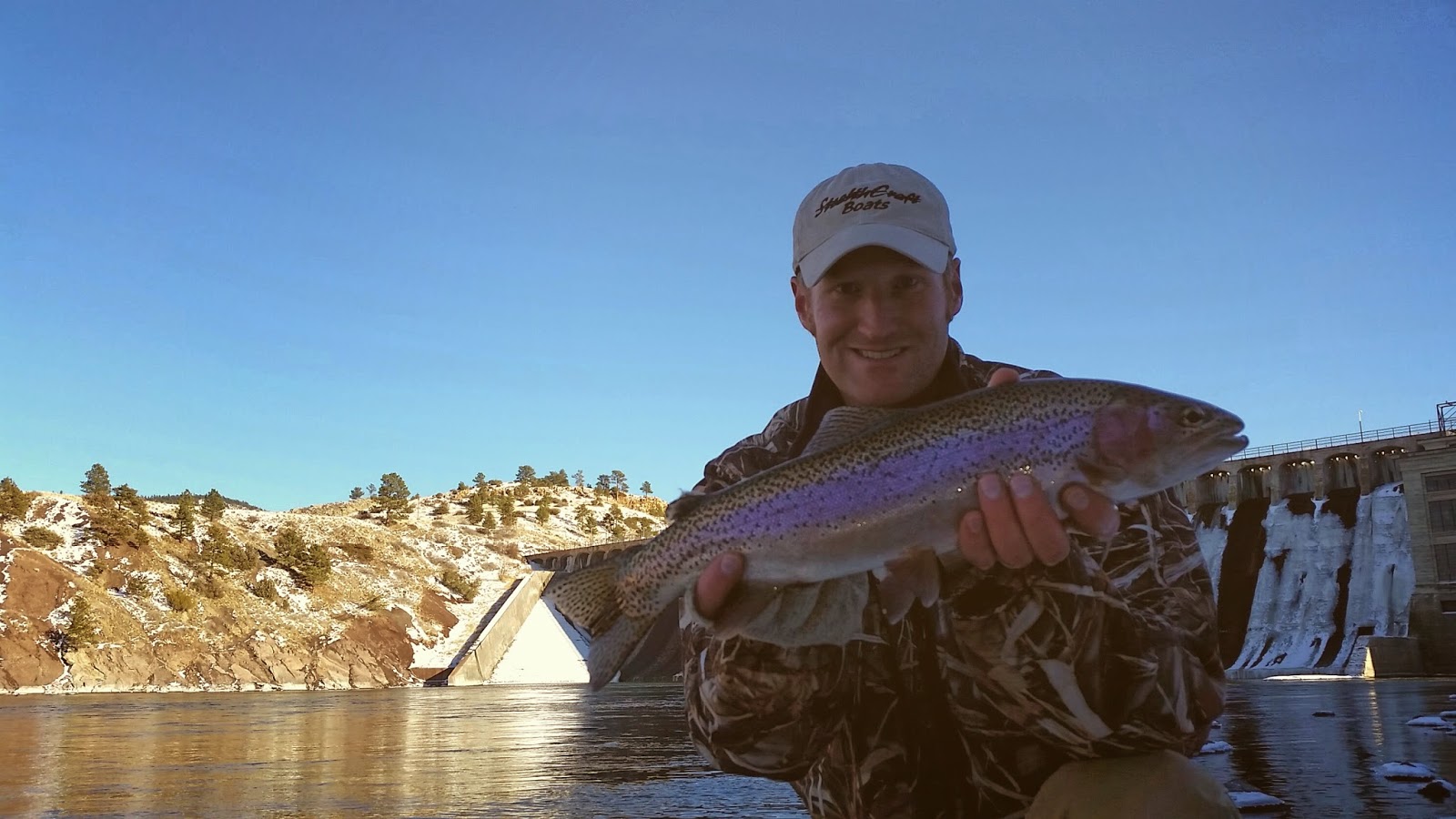 The air temp was just high enough that ice on the line and in the eyelets was not a problem. I got to work swinging jigs and searching out the type of runs they were holding in. I was cutting the first tracks in snow that was days old and frozen to a hard crust.  I was on a stretch that would be crawling with folks in the summer months. The sub-aqueous grass that plagues fisherman summer and fall was all but gone. I slipped along ticking bottom and popping jigs till I found myself in a deeper run and setting into my first hookup. Doesn't matter the time of year, nice trout always enjoy a fat minnow. But now the water was cold enough that even these larger ones were feeding midday and the lethargy of summer was gone. Each fish of any size peeled drag and pumped the rod with spunk I hadn't felt since about March. Funny, everyone flocks 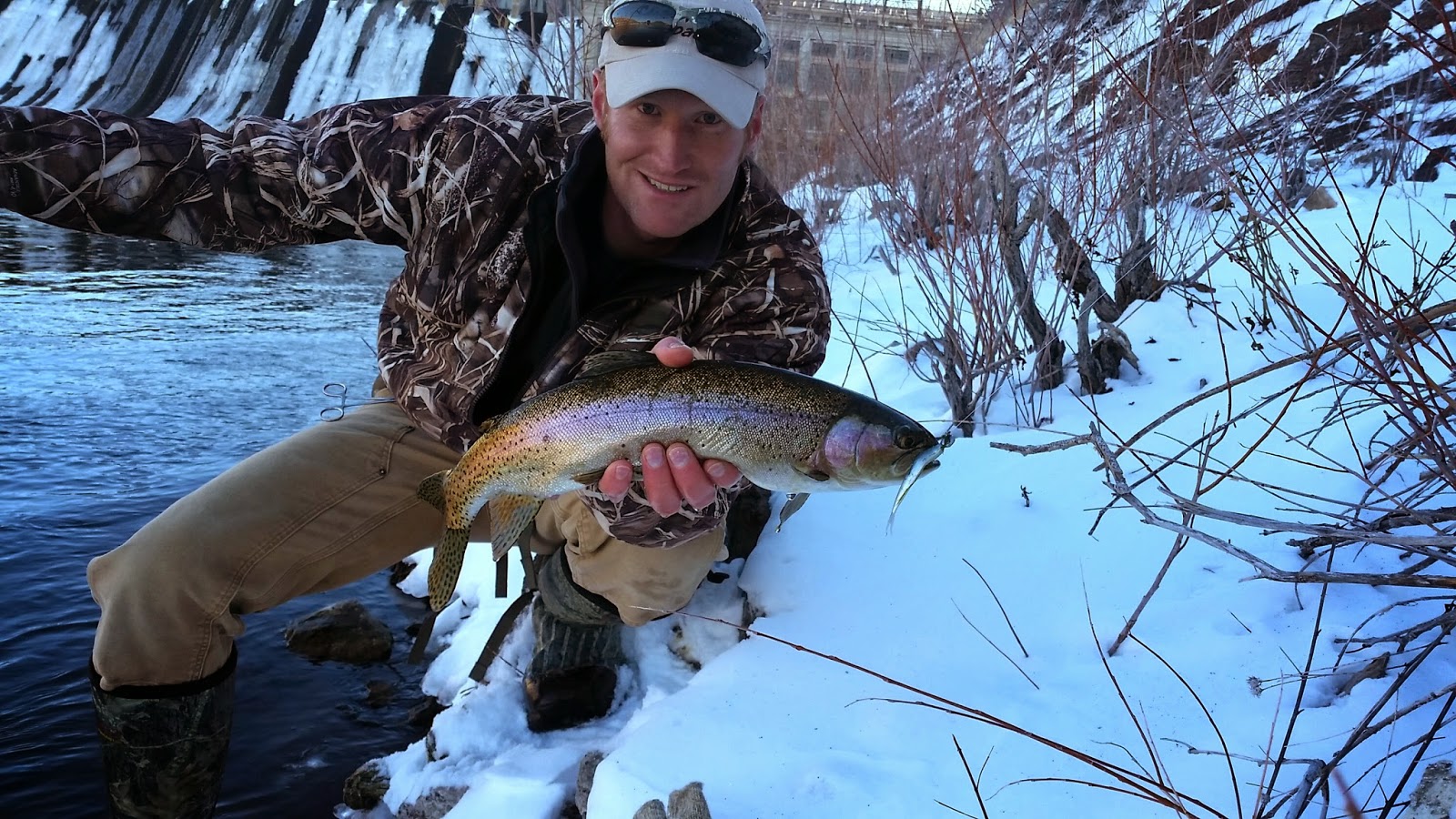 to the river as some of the best fishing is ending, and then go home again about the time it picks back up. Summer is convenient when it comes to hatching bugs and warm fingers, but it's kind of a bummer in terms of pursuing big fish and a heavy fight. At least during daylight hours. 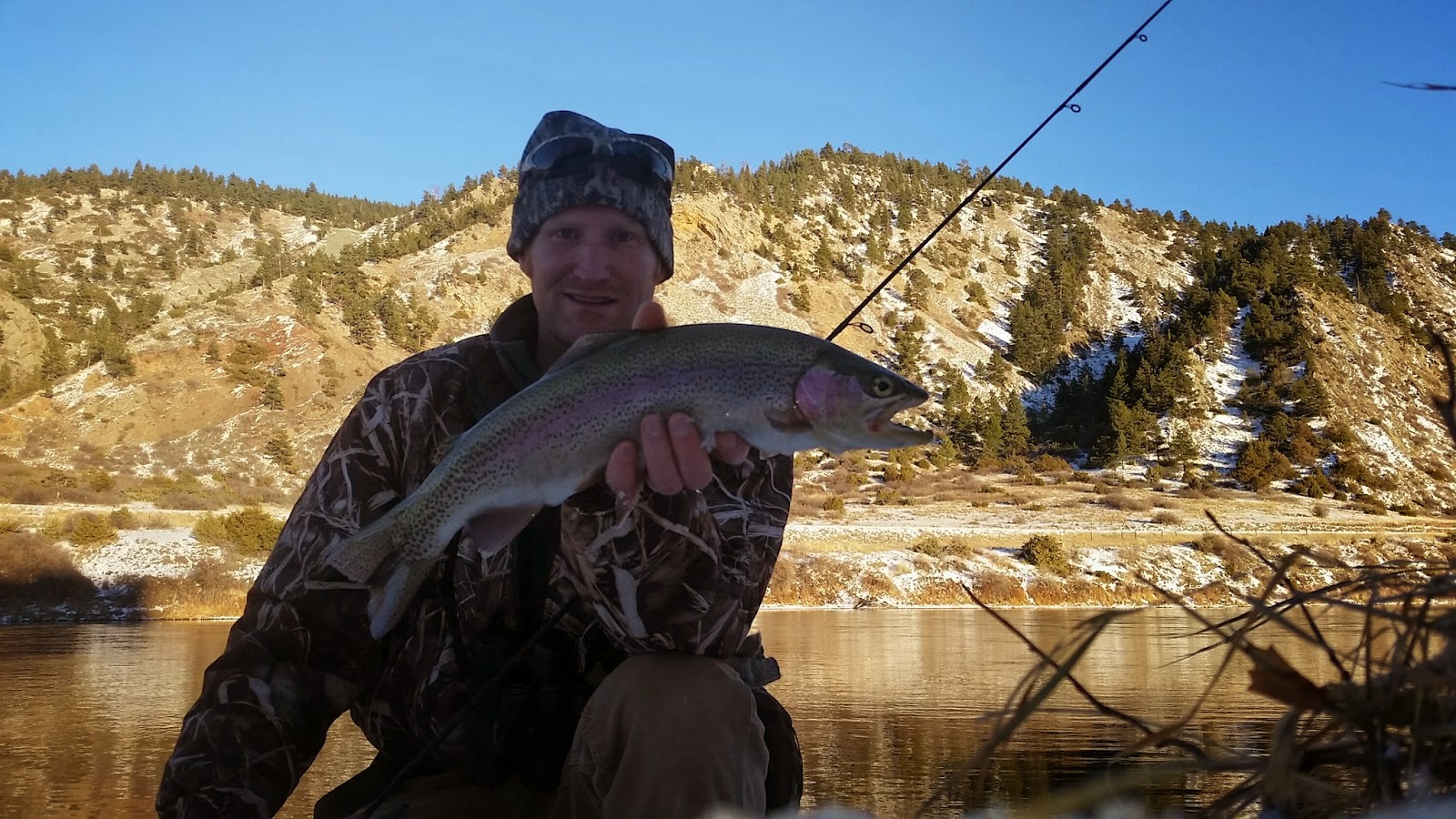 The fish were picking up the jig in subtle but solid unmistakable taps. I'd cast far enough upstream to gain the depth I needed by the time the jig was passing me. Then I'd swing it like a streamer, but also bounce bottom and sometimes feed it line to increase its travel time through the strike zone at depth.
It was hot! The only other guy I saw was a duck hunter. The biggest fish were rainbows. The browns seemed to be holding in swifter water today. At least the ones I hooked into. Ducks whizzed up and down the river, their wings screaming as they careened by. The occasional shotgun blast rolling through the canyon walls.  Geese honked as they passed overhead in stringy viceroys. Bald eagles circled and perched, eyeing equally the river and the cawing crows. And the deer on the ridges kept my binoculars busy. The draw of glassing for antlers doesn't diminish even after the tag is filled.
I could have just driven by like everyone else and camped out in my hotel room earlier, but packing a rod and a box of jigs was my ticket to a beautiful evening full of late fall/early winter action. And I don't just mean the fish. 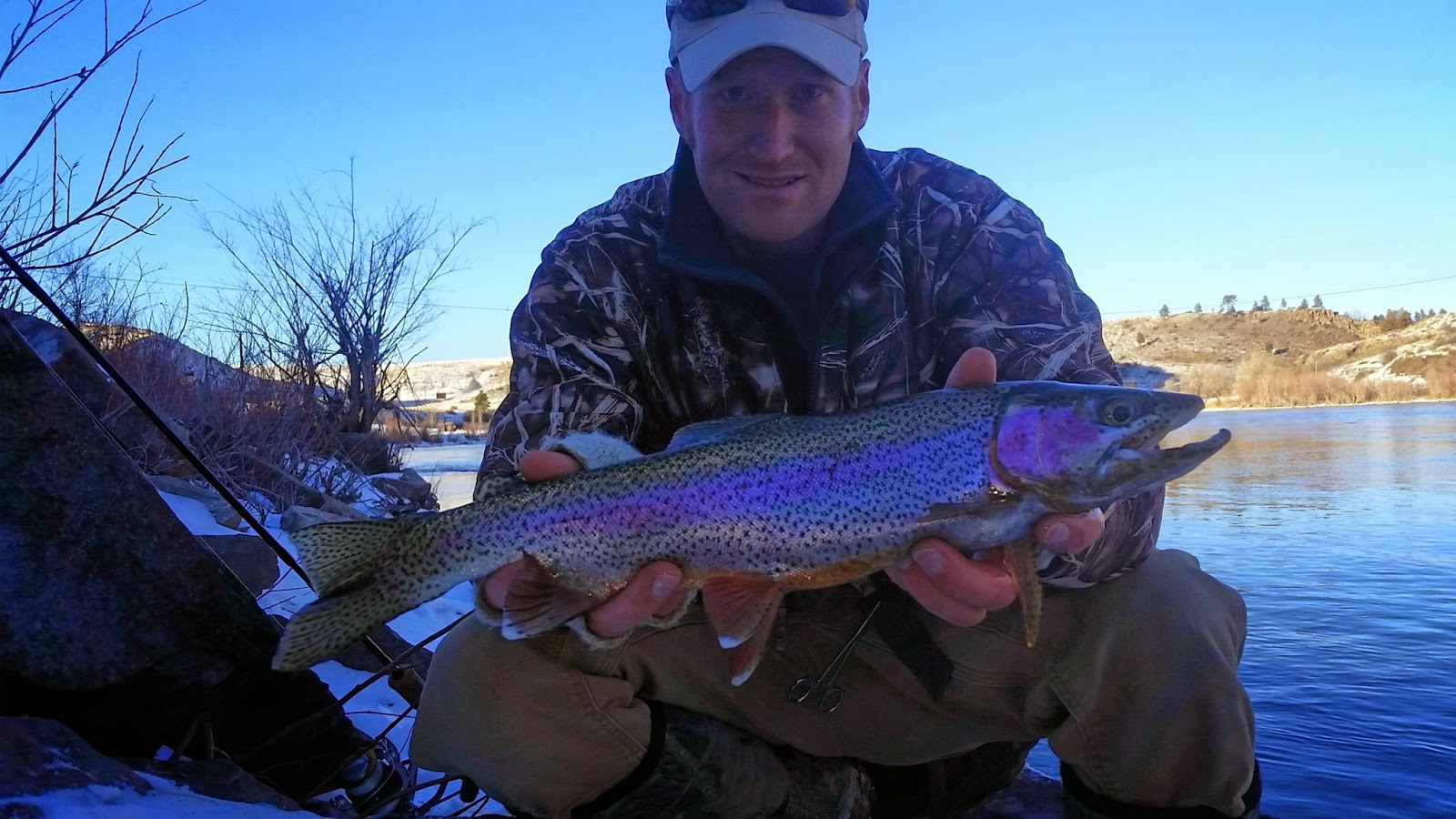 As darkness fell the temperature started its dip to single digits for the night. Still, it was hard to leave.  Only nine months left to fish before next hunting season. 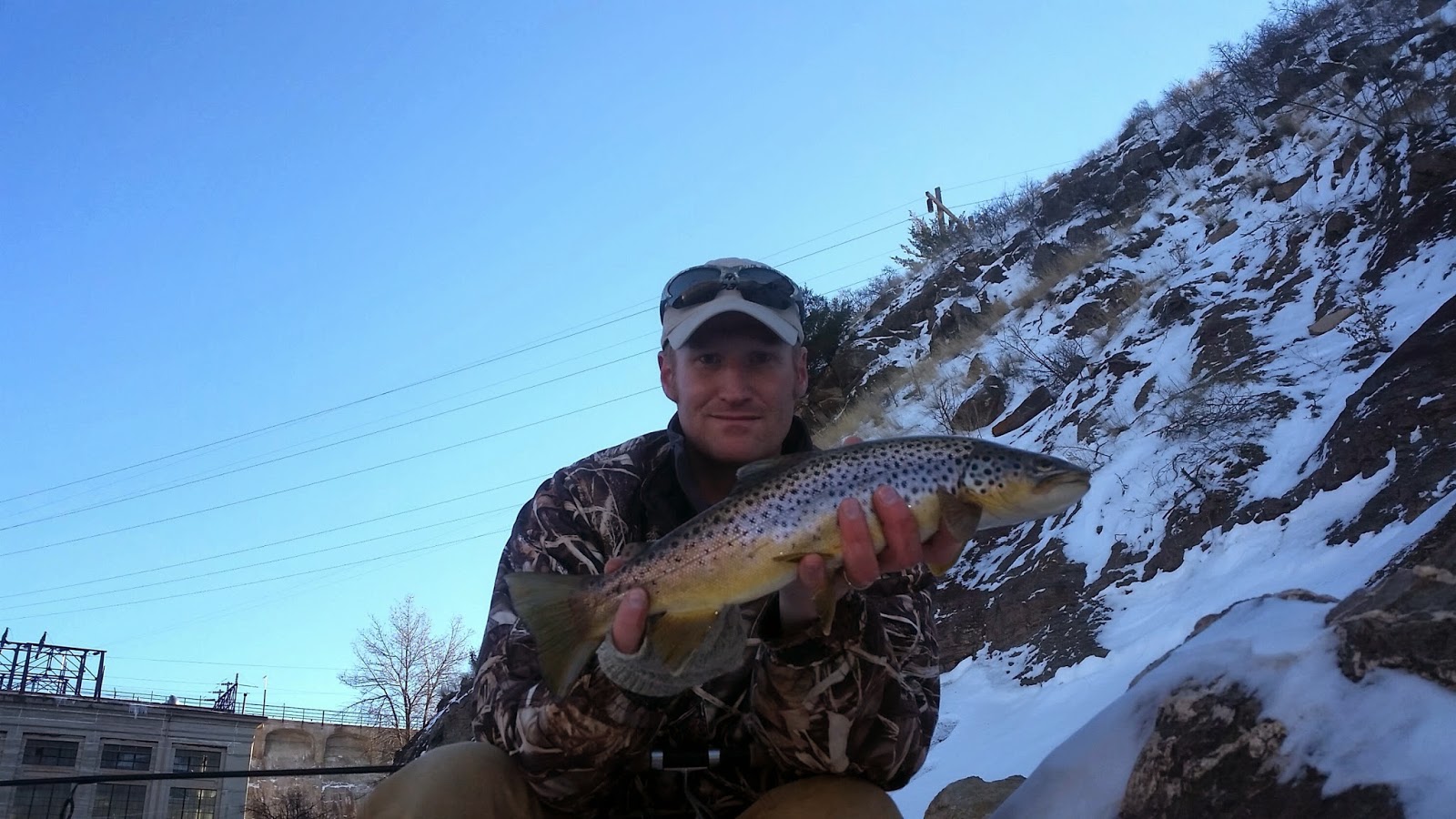 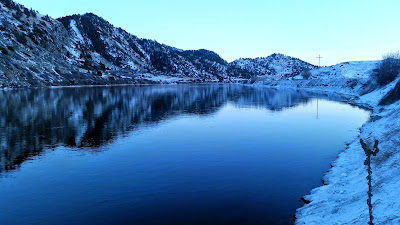