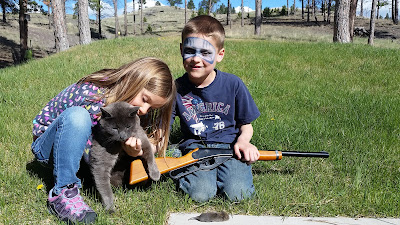 
I did my best to skirt the issue.  Skin a mouse?  Did I have to?
But I couldn't think of a good reason to get out of it.  Nothing came to mind that would outweigh his enthusiasm.

In an effort to prepare expectations for a less than stunning outcome I said "I'm not sure this will work all that well," wondering if a perforated mouse skin would be fragile like a rabbit or hearty like a squirrel, "but we can try."

I dilly-dallied my way into the house and back again, toting a small pocket knife and wondering how I'd allowed myself to get talked into this.  I was still pondering ways to get out of it.
I chuckled at the idea of maybe using the skin to tie up a mouse pattern for chucking to nighttime browns this summer.  Couldn't get more realistic than that.

And then, problem solved.  There sat the cat, gulping the mouse down just as I came back onto the patio.  Two nods of the head and it was gone.  The kids didn't see it happening, and Cooper was beside himself when he discovered his hide no longer existed.  The war paint was in serious danger of getting tear-streaked.

I guess the cat had achieved his goal.  The kids had recaptured and dispatched the subject.  Lesson concluded for the day.  And since they obviously weren't hungry, there was no need in letting fresh groceries go to waste, even if they tasted just a bit like BBs.
Posted by Bryan Allison at 10:24:00 PM