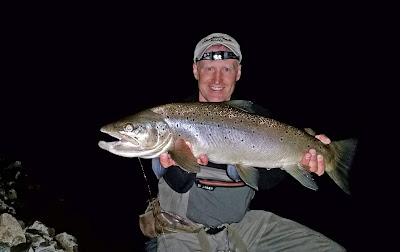 This was the first full moon weekend of summer.  The third weekend of June, 2016. Up until June the mouse bite had been slow.  It just hadn't turned on yet. But  after getting into some great mousing action during the darker moon a week prior [see Mousing: 'tis the season], I couldn't wait to get out with moonlight to see by and sling some more mice. The switch had flipped and it was time for the summer games to begin.

Sometimes all the effort pays off in a big way. Those are motivating moments.  They pull you forward as you anticipate when they might occur, and then they propel you into the future with renewed vigor after they've happened.  All those hours of exploring spots in daytime. Casting into the darkness of night. Hours logged.  Fish encounters - successful or not - filed in your mental database.  You hope it will happen, you know it CAN happen, but deep inside you wonder if it ever really will.  But it only takes one bite, and that bite came on my second consecutive solo all-nighter of the weekend when my mouse pattern was slurped off the surface at 2:30 in the morning.

I was targeting a shoreline of big chunky rocks I've been hitting repeatedly for three years after discovering it holds solid browns.  More often than not it is persistence that catches fish more than any particular technique. I knew it had to hold big ones. Over the past few years I've taken browns measuring in the low to mid twenties (inches) off it. And I'd broken a bigger one off in a lousy rookie-like hookset - I'd seen the giant brown take my offering in broad daylight and it had made a fool of me [in the 2014 article Looking Back]. If I had to rank my current spots for potential to produce a trophy, this one little stretch of shoreline only a couple hundred yards long would be on top. And I hadn't even fished it at night before. So I opted to take night number two, pick my way for nearly two miles along the stony and essentially trail-less river edge to get there, and cast to this one spot. The result was likely my biggest trout to date, and certainly my biggest on a fly rod.

But before that, the first night was fantastic all on its own.  The hits were infrequent but solid - a typical story
on a night of mousing. And browns outnumbered the rainbows. I lost two mature browns, one of which I saw clearly enough in my headlamp to have counted spots - it was very acrobatic and jumped constantly, ultimately coming off on a leap just as I finished setting up my tripod. I'd seen by flashlight that he had a pretty pronounced kype and I was wanting to get a picture of him while he was still wearing the mouse on it.

This was a shoreline with ample structure and slower current - an ideal setup for tossing mice. And it stretches for over a mile before transitioning into terraced cut banks and trading the rocky structure for clay bluffs.  I caught fish on three different mouse patterns that night.  All of the browns hit when the mouse was inches from or touching rock that extended out from the shore. They were waiting in ambush points like largemouth bass, but sitting in water you'd never find them in during the day.  I managed to net and photograph three browns at or over 20 inches, two of which were particularly impressive in overall size and coloration. Two stunning browns in one night!  It was such a good night. Seemingly so hard to beat.  It was exactly what you hope for when working a trout water with mice. I was satisfied enough that if I didn't make it out again this weekend I would still feel fully accomplished.

But then on Saturday night I chose to make that hike.  Friday had been too good.  It was possible to go.  I could fit it in.  Who needs sleep anyway?  Remember, persistence.  Make it happen, or it won't.  The spot was gnawing at me, and it was bothering me that I was yet to ever try it in the dark when I knew it would eventually produce. So I tossed civilized common sense out the window (i.e. that I should catch up on some sleep) and worked my way to it, sometimes just walking, sometimes stopping to cast to likely looking spots along an otherwise bland stretch of river.  Not that there wouldn't be fish, and I did catch a couple, but there wasn't any major structure for the browns to key in on.  I generally catch rainbows in open water and the browns tight to structure - just like the daytime, but perhaps even more so. And browns were the focus.  There was one vertical wall along my path, and I stopped to work it.  I had a great take and completely missed.  First hit of the night. Casting was more difficult than the night before.  A stiff wind was blowing up river, which messes with placing the mouse and drags the line, slowing the drift.  But there were calmer lulls.  I pulled a rainbow from a pocket behind a lone boulder.  I climbed on top of the big domed rock and drug the mouse around the perimeter, not casting at all.  Jigger-poling for trout.  The fish smashed the mouse and dove down alongside the boulder.  I was very surprised to see it was a rainbow.  But the ice was broken - one fish down. 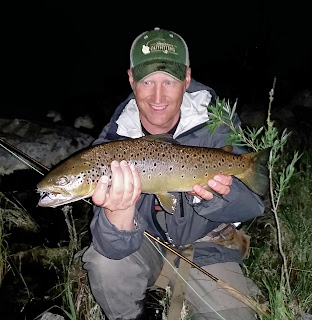 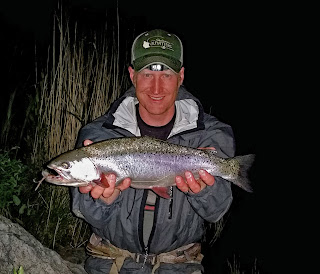 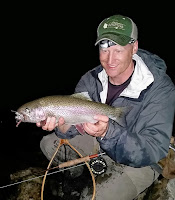