30 inches of mouse-eater: a morning of predators

When was the last time you saw a 30-inch brown and a mountain lion in the same day?
For me it was as June's full moon faded into morning. 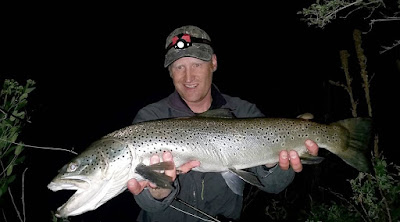 I chuckled to myself as I slid my net into my waist pack and looked up at the moonlit slopes.  Here I was in a fairly popular spot for recreational users without another person around.  I picked up my eight weight, slid my fingers down the heavy furled leader, along the 16lb tippet, tested the knot, and then stowed the mouse on the keeper.  This evening I had decided to try somewhere new.  I had scouted the place earlier in spring, so I had hiked it in the daylight, but this would be the first overnighter. The spot required more time investment than my usual places.  I planned to finish up about two miles from where I'd parked.  I had driven about an hour from home.  Given the added remoteness, I added my .44 to my belt.  Aside from the occasional coon who doesn't want to give way,  I haven't had any midnight encounters - but there wasn't any need to tempt one tonight by being unprepared.  Once last summer I had a bear mosey along the slopes well above me.  It moved along noisily and bellowed once as it faded away. I figured it was saying good bye.

I shut my tailgate and hit the trail.  The time was now 11:00pm.  Five solid hours of mousing lay ahead of me.  Memories of key pieces of rock structure mentally noted six weeks ago were on my brain. I'm learning to treat mousing for browns like tournament bass fishing - skip the 'so-so' water and hit the primary structure.  Then move on. No need to waste limited darkness picking the entire shoreline apart.

My run-in with 'beaver' trout

There's an image burned into my brain. A week ago on a partially moonlit night I was swimming a mouse along a vertical rock wall on a river clear enough to fish but swollen with snow melt. It's a wall that's been productive over the last few summers, accounting for more than one of my larger browns. So far this summer I haven't been touched along it. I mostly chalked this up to high water, figuring it may be a holding point during lower summer flows that are yet to come. Still, I stood for several minutes and many casts making sure to work the wall thoroughly. You can't reach it all from the bank. And you can't wade. It bulges out and then tucks back in out of view. So toward the end of the time I spend on it I start getting creative with long sweeping casts that I try to make wrap around the rock face beyond the line of sight. Basically just feeding line and hoping the fly rides up against the rock. I do this from a slightly elevated position, which aids in being able to cast, but also provides a fateful view of what's below.

May has given way to June.  With that shift begins a new summer of night fishing.
Mousing has picked up.  There was surface action the entire month of May, but it is
just getting better the deeper we get into June. The waxing moon in the first part of the month is making casting easier and the takes visual. The number of strikes received in a night is climbing as the water warms and shallow water forage becomes more prevalent. I'm seeing more  scampering mice both by headlamp along the river  and in my headlights while driving. Frogs will be out soon. I'm beginning to see crayfish venturing along the margin of water and dry land.  All in all, the reasons for a big trout to hunt the shallows in the dead of night are mounting up.  To me, this is some of the best opportunity of the year to tangle with a trophy trout.  And what better way to do it than on topwater baits during the adventure of nighttime on a river void of other anglers.

On the night of June 2nd and into the 3rd, I was accompanied by my friend Josh who has worked in the fly fishing industry but had never moused. The night was calm and partially moonlit. Once the sun was fully gone around 10:30 p.m. and darkness had set in, we dropped into the section of river I intended to fish and began some practice and instruction. Nothing major, just getting the general feel for what we'd be doing.

Mousing to me is kind of like swinging streamers at short range. It's everything you're not supposed to do when dry fly fishing. Downstream casts. Drag. Tight line. Wake. Splashes.
During our practice run Josh had two hits. He asked "Is this one of your special spots?"
"Nope, this is a 'nothing' spot. Just meant to practice." That boded well for the night.

A short distance downstream we came to the first piece of serious structure I wanted to target.  We scrambled over some boulders and got into a decent casting position. Within a cast or two Josh fed his mouse to where the current wrapped around the point of a boulder just as I described. An audible slurp signaled a take and Josh set into solid fish. It didn't break top again in any of the usual ways. No rolling, splashing, or jumping. It just turned downstream and set Josh's reel to singing - and against a tight drag. He was through the fly line and into backing almost instantly. The fish blew through the next few points of structure I'd intended to focus on and went around a big jam - passing around the outside edge and then tucking in behind it downstream, still peeling line as it plowed into the next big pool.