King of the stream

Fish of the year (well, it's in the running at least) - and he won.  It's not that it was the biggest fish I've caught this year. Far from it. But this fish was uncannily large for the little stream it lives in. I fooled it twice, but was never in control, even for a second. I was out maneuvered from the start. 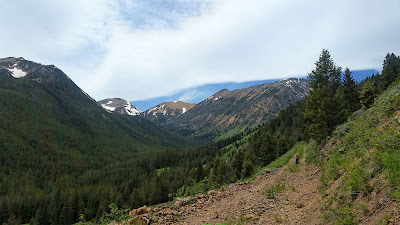 I can still see the flare of those orange slashes and the soft yellow glow of mature fish. It was the biggest cutthroat I've tangled with to date. It wasn't even a serious fishing trip - just a couple hours stolen during a family camping weekend.  After a day of hiking, the family was back at our campsite along a bold stream swollen with snow melt. It was clear, but powerful and full. Everyone seemed content to laze around, so I strung up a fly rod and started up the creek right out of the campground.

From the beginning our trip wasn't what we had intended, and as a result we were exploring somewhere new. The area we had planned to camp in was overrun. People everywhere. We ran our finger across the map, found the closest Forest Service, and decided to drive blindly up a new road. The adventure took us through old mining town long passed it's heyday. Once grand brick buildings lined nearly unused streets.  It took us up into a valley rimmed by ten thousand foot snowy peaks. People were still around, but finding a place to stuff our camper along the creek wasn't impossible. We'd settled in, made a grand supper, built a solid fire, and spent an evening under the stars listening the roar of the creek and the crack of the fire.
Not a bad salvage job. 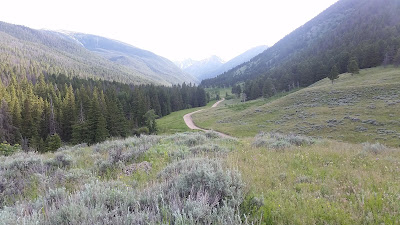 The next day we crawled up an ever-narrowing road till we came to a spot high in the back of a valley where we could pull off and hit an old road grade for a hike. It was that hike we'd returned from with a couple hours to spare before supper time.

I started up the creek fishing a small dropper under a parachute. Fishing was tough with very little water to cast to since most of it shot by as if in a flume. I managed a few small cutthroat from a pocket here and there. One bank had an elongated run that was holding fairly still, and on the first float through an enormous cutthroat nosed the dry and moseyed back down. I brought the rod tip up anticipating heavy fight and was given an instantaneous break. A section of leader had come undone at the knot. Such an oddball thing, and so awfully untimely. I'd just hung a dry fly trailing a dropper in the jaw of a cutthroat pushing twenty inches in a small mountain stream. 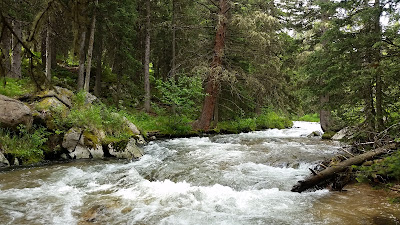 I backed off the hole rather than walking through it and continued up the creek. I took the occasional small trout here and there, but overall was having a tough time drawing strikes in the swollen water.


On the return hike to camp I stopped back by the skinny little run holding the big trout. I eased in and floated some flies through it a few times. On probably the sixth drift through, my dry abruptly sunk, and even before I raised in a hookset, I could see the same swirl of large trout moving back to where he'd come from to intercept my nymph.

This time he was on. He battled all over that little hole and then did the inevitable and shot into the raging current. He briefly held in it and then rocketed downstream. This fish was raw power, and in that current he was unstoppable. I was taken back instantly to my steelhead days where running downstream after a hooked fish was common. But here I had no room to run. Standing waves were slamming into tree trunks and the fish was deep under overhanging limbs and roots wads along an undercut bank. I knew the fight was done. I couldn't chase, and so rarely does a fish ever run back upstream in water like 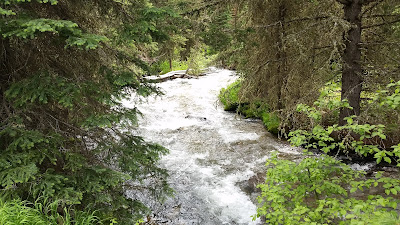 this. But that's what I had to hope for. I wasn't swimming in that torrent.  I hung on longer than I expected too. I saw the fish a few more times. He ran upstream again once, but the surge forward was short lived. He surfaced and thrashed a couple times, and on his last airborne episode I could see daylight down his mouth and out through his flaring gills like a tail-walking largemouth bass.
Such a massive fish. Especially relative to the stream. No surprise when the line popped and he was gone. The hook of my tiny number 18 dropper had straightened.  I didn't think to hang on to the fly, but it occurred to me later that perhaps it should have been given an honorable discharge of some sort, like a permanent place in the visor of my truck where other worthy flies have gone to retire.


"I did well"  I consoled myself. I'd lost him once to the fluke unraveling of a leader. Then managed to hook him again later. Once he got below me, losing him to that current was to be expected. At least I got to watch him eat twice, and he showed me that big hooked jaw and orange slashes before bidding farewell and disappearing into the raging stream. I hope he finds his way back up to his quiet little feeding lane again....

I actually walked back by again the following day and wondered if he was in there. But I wasn't fishing this time, and he'd won anyway. I showed the spot to my wife as we walked along with the kids, and she just rolled her eyes. Another fish story to her, a brush with the king of stream to me. 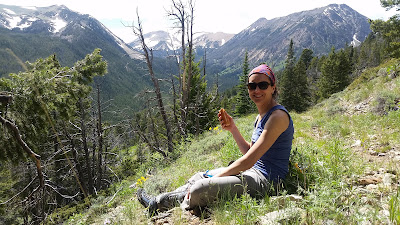