This passed weekend involved two floats. Each was primarily focused on searching for walleye, but also looking for trout and maintaining a fly rig to cast to tailing carp. 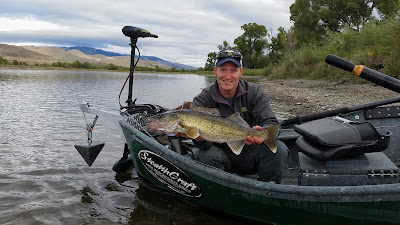 Saturday began bright and early. Well, no, it was dark. Temps had dipped to the upper 30s overnight thanks to a cold front that had graciously volunteered to push the nasty smoke out the region from wild fires across the West. The trip had been planned for more than two months. Erik, the friend I was with, works in the medical field and has very limited time to hit the water. I like to make our opportunities to fish as productive as possible, but he's always quick to remind me that floating down a river amid gorgeous scenery is already more than productive.

After running our shuttle, we slipped the Stealthcraft into the river in a balmy 40 August degrees. Snow dusted the mountains from the night before. A nippy wind forced the need for jackets.  The preceding day had been in the upper 90s. Today we would be lucky to hit 70.

We began by floating along nice banks and riffles and passed the better part of the first hour without a hit. Erik hadn't caught walleye before. Because of that and how infrequently he gets to fish these days, I certainly wanted to get into some action. 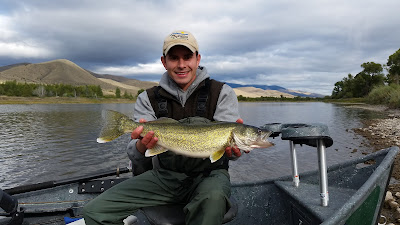 We came into a run where a side channel dumped back in from behind an island - good depth, good flow, and a nice distinct seam. I called it out as the best run for walleye we'd seen yet this morning and started pointing out where I thought they'd be holding. Very gratifyingly, and almost instantly, I had one on. It was massive, bigger than anything I anticipated catching today, and even at my first glimpse of it through the steely water I wasn't convinced it was a walleye. Turned out to be 27 inches and pushing 7 pounds. First fish of the day!! After a few pictures and some oohing and aahing back it went to live life in the river. 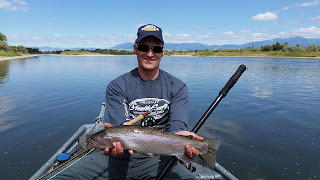 The drift down that run produced other solid fish in the 16 to 20 inch range. Once we seemed out of the holding water, we motored up and redrifted. One of the first fish on this second pass was Erik's big catch of the day - a hefty walleye of 25 inches and well over 5 pounds. The summer walleye in this river I've caught before haven't been on this scale at all. We anchored up and took some more smaller ones, some of which landed on the ice in the cooler.  Fish tacos were now on the menu....
Glass minnows ruled the morning.

The day began  to warm  as we drifted on.  We continued to take a walleye here and there, but the action slowed as the sun grew higher and the clouds thinner.  We started seeing some carp along the banks and in the shallows.  We tried our hand at stalking a few by foot.  We made casts from the boat into foam lines where they were skimming the scum.  No takers. Should have just brought the archery equipment.... 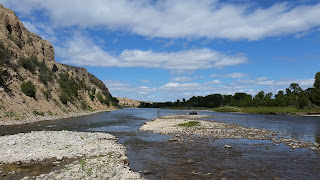 After casting to a thick pod under the afternoon sun and having them eventually scatter, I lifted my line and layed out a cast to a current seam behind a point of rock just downstream, kind of laughing to myself that I was intentionally casting to carp.  My fly was picked up by a heavy fish and it was quickly apparent it wasn't a carp.  Ironic I should be casting with carp on my mind and pick up a 20-inch rainbow.  After a quick net job by Erik and a couple photos, the trout slipped back to where he'd come from.

Erik tied into a large trout later on but it was off before it could be netted.
I launched again the the next afternoon with a friend named Jeremy to repeat the upper portion of the previous day's float. The plan was to drift down and motor back up.  I had brought the gas motor for that purpose - the versatility of Stealthcraft boats.  I generally try to do motoring floats in reverse order (as in motor up and float back) in case of motor trouble, broken props, etc.  You can always float back.....  But the water we wanted to hit was downstream of the nearest launch, so we took the risk. 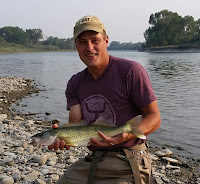 After an entire spring and summer of flawless service, and on the only downstream run of the year, the motor jammed. Fortunately we were early in the float, and it was sooner than we would have normally fired the motor up.  But after catching a couple small walleye we had decided to motor up for a second drift and discovered the problem. 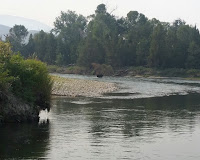 A cow moose came out of the woods and stood in the middle of the river to mock us while I dismantled the motor with my Leatherman.  She was so amused that after crossing and climbing the bank, she came back down to watch some more.

Parts were physically broken, so we beached the boat, strapped on some gear, and hiked the high water mark. We took a couple walleye in a likely-looking side channel. Plenty of carp were tailing in the shallows, but we ignored them having left the fly rod in the boat. 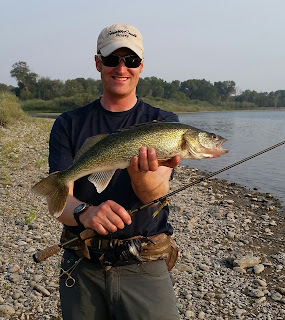 We eventually came to a nice run on the main river that dominated the time we had left. It was a couple hundred yards long with a good mix of ideal flow and depth.  Glass minnows were again the big producers, but we also took some on plastics and a couple on plugs.

We selectively started amassing a stringer to carry out.  When it was time to go, we hung the stringer on a pole between us to pack back to the boat.  We hadn't even kept full limits, but the chain broke as we hiked along. Jeremy said it was the best walleye action he'd had in 15 years. 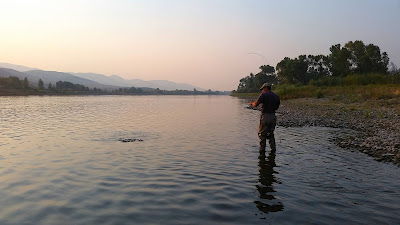 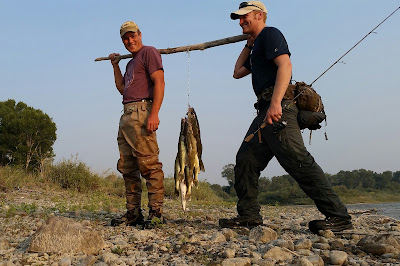